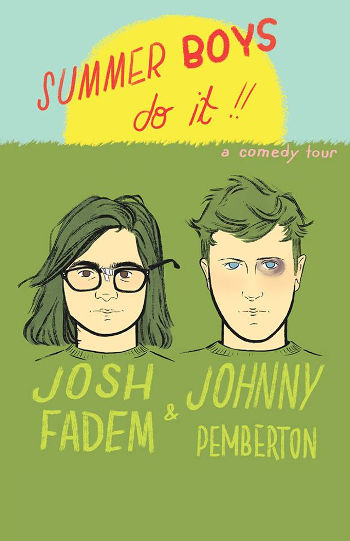 Rising comedy stars Josh Fadem and Johnny Pemberton will stop through The Mill on Tuesday, June 24 at 8 p.m. as part of their nation-wide stand-up tour. Its a pairing that will let you appreciate a nice range of what alternative comedy has to offer.

Pemberton, who you may recognize as Delroy from 21 Jump Street or from his voice-over work on Bob’s Burger’s and Adventure Time, hews to a more standard comic routine with his sets, offering up plenty of self-deprecating asides and pop-cultural quips, but mixes it up by incorporating elements of improv and breaking with stand-up conventions.

Fadem, probably best known for his role as Simon Barrons, Liz Lemon’s agent on 30 Rock, gets his laughs with heavy doses of awkwardness, physical comedy and unrelenting absurdity. Along with being named one of “10 Comics to Watch” by Daily Variety, Fadem is also a writer for Adult Swim and a regular contributor to Funny or Die.