Twenty years ago, Sen. Chuck Grassley was very clear how a president should behave: “The American people have a right to expect their president to be completely truthful.”

Grassley said that in a Feb. 12, 1999 speech during Senate deliberations on whether to convict President Bill Clinton of the charges stemming from his affair with Monica Lewinsky for which the House of Representatives had impeached Clinton. The contrast between Grassley’s 1999 stance and his official statement on the Mueller report has attracted attention on social media, with a 20-year-old video clip of the senator has been widely shared. Continue reading…

In March, just two months after a federal judge struck down Iowa’s “ag gag” law as unconstitutional, the Iowa legislature passed a new, almost identical version of the law.

“So we’re doing another bill pretty similar to the last one which is going to end up … costing taxpayers more money [to defend in court],” Democratic Rep. Sharon Stockman from Mason City said during the Iowa House floor debate on Agricultural Facility Trespass Act. Continue reading…

Mayor Jim Throgmorton announced on Tuesday that he won’t run for reelection this fall.

“This has been a very hard decision for me,” Throgmorton said in written statement. “When running for office 4 years ago, I said I wanted to help lead Iowa City toward becoming a more just city. We have made great strides in that direction over the past 3+ years, and much more remains to be done. I would like to have a hand in crafting our next steps, but there are other factors I must consider.” Continue reading…

Elly Hofmaier’s rising tide: the UI senior and Elly H. and the Sexy Boys frontwoman on her burgeoning career

It’s an overcast Friday afternoon, and I’m on the verge of running late for my interview with Iowa City’s own singing/songwriting college senior, Elly Hofmaier. As I preemptively draft an apology text, she beats me to the punch with a reassuring “take your time!” The effort only spurs me to walk faster, because time is incredibly tight for Hofmaier. Outside of school, Hofmaier lends her voice to several musical acts including (but not limited to) Elizabeth Moen, Anthony Worden and the Illiterati, the Johnson County Landmark Jazz Band and her own project: Elly H. Continue reading…

Ground-breaking ceremony for the UI Stanley Museum of Art announced

The University of Iowa announced on Thursday that it will hold a ground-breaking ceremony for the new Stanley Museum of Art building on Friday, June 7.

“It’s been a long wait, but in just a few years we will be able to bring the Stanley’s world-class collections home to support the education of UI students and to enrich the lives of people across our state,” museum director Lauren Lessing said in a written statement. “With its welcoming front porch, spacious lobby, art-filled galleries, and rooftop terraces, the new building will be an ideal gathering place for those who want to learn, socialize, relax, and enjoy themselves.” Continue reading…

A May 3 drag show and fundraiser organized by members of the Mount Mercy University Student Government Association (SGA) and LGBTQ+ Alliance Club was canceled Wednesday morning by university president Laurie Hamen. In an email to Mount Mercy (MMU) students, staff and alumni, Hamen suggested the drag show would not have been respectful to the Cedar Rapids university’s “Catholic heritage” and “stakeholders.” Continue reading…

‘I have a plan’: Sen. Elizabeth Warren discusses proposed wealth tax and more in Cedar Rapids

It was always expected that Sen. Elizabeth Warren would receive a warm welcome in Cedar Rapids from the Linn Phoenix Club. The group works to elect progressive Democrats at the county level, and Warren is one of the most progressive Democrats running for president. What wasn’t expected was the size of the welcome. Continue reading…

The Iowa City Student Climate Strike—held in solidarity with student activists around the world—entered its sixth week today, led by students at South East Junior High. Iowa poet laureate Mary Swander joined the demonstration outside the ICCSD Administration building, reading an excerpt from her book of poems ‘The Girls on the Roof,’ inspired by the 1993 floods in Iowa. 📸@jasonlevismith 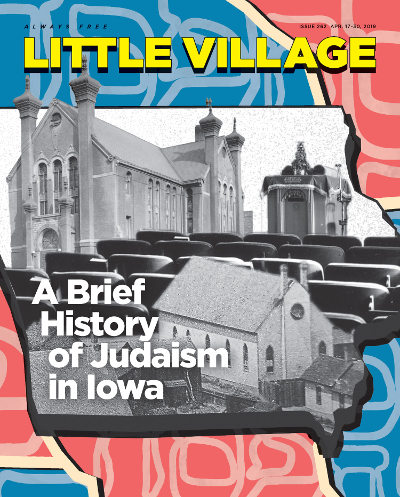