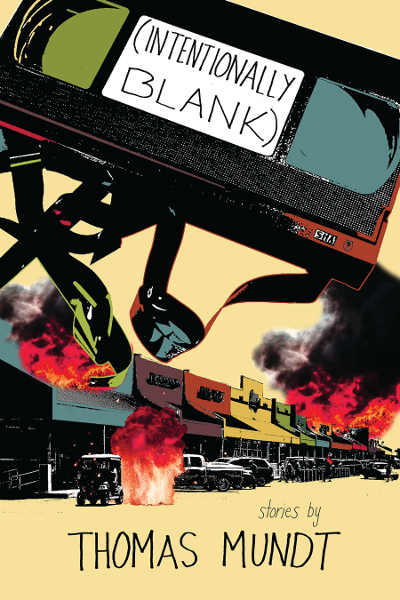 Thomas Mundt’s (Intentionally Blank) opens with a line from a Betty Wright song: “Jumpin’ slick was my ruin.” Wright’s narrator, a free-spirited woman who loses a kind suitor to a more loving and attentive rival, would be right at home in the world of (Intentionally Blank). Mundt’s collection of 22 short stories centers on characters whose attempts to forge or maintain an identity are challenged or thwarted by living in a highly commercialized, cutthroat, 2019 America. But don’t let Mundt’s deluded denizens and late-capitalism backdrop fool you into thinking (Intentionally Blank) is anything less than hilarious.

(Intentionally Blank) opens with “My Hawaiian Shirts,” the tale of a man whose entire identity revolves around his collection of Hawaiian shirts. Throughout the story, the narrator’s focus is upon his ever-expanding shirt collection while briefly mentioning, in passing, the tragic death of a friend and his own father’s untimely confinement to a nursing home.

In “Backhoe,” a spectacular piece of short fiction about race and class in late capitalism, Mundt explores the relationship between an apprentice on a downtown Chicago construction crew and the work release prisoner he’s been charged to monitor (nicknamed Backhoe for his overzealous demand that he be allowed to use the backhoe). Fantasy blurs with reality by the conclusion as the narrator and Backhoe find themselves aboard a boat on the Chicago River.

Mundt’s style and prose are inviting and accessible. He boldly dives deep into the psyche of his characters in much the same way George Saunders does. A small tic or an aside about habit or ritual speak volumes about characters whose entire lives exist within six short pages.

The common thread throughout (Intentionally Blank) is labeling. We all label ourselves and others with memetic nicknames, limiting job titles, impossible-to-achieve expectations and unforgivable, inescapable judgment. Repeatedly, Mundt points to the myriad ways we could all be so much freer to be happy if only we could see past the labels we’ve been given and the labels we’ve given others.

This article was originally published in Little Village issue 262.