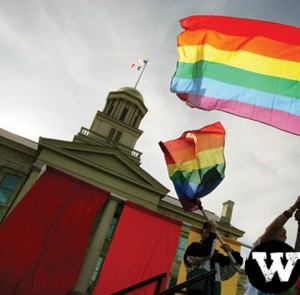 The week’s almost over, y’all, which means it’s about time for another edition of the Iowa City Weekender! There were a few items here that didn’t come to my attention until the very last minute, so any short write ups/block quotes is not a product of laziness, but rather a genuine commitment to being thorough. You’re welcome. That being said, it’s shaping up to be a super exciting and eclectic weekend. Ready? Let’s begin.

The Iowa Opera House Project, which showcases Iowa singer/songwriters performing in historic theaters and opera houses, visits the Englert tonight and features Iowa City musical staple, Sam Knutson. You know Mr. Knutson from his lauded rock band, Shame Train and you’ve likely seen him running the sound board at The Mill. Knutson is currently working on a new record and is performing his songs sans backing band. This event will also be filed under the Intimate at the Englert series, a project in which the artist and the limited audience (75-100 people) share the stage, creating a, well, super intimate experience. John Waite will open the show.

I am aware that I am writing about the soul dance parties quite frequently here, but that’s just because they’re super fun. There is also a part of me that wants to relive the madness that occurred on Thursday nights at the Picador. I feel like the recent push for free Thursday night dancing is capable of capturing that very spirit. Four DJs will be spinning all vinyl from funk to soul to R&B. You down to get down? Get to Gabe’s.

This event just popped up on my Facebook feed late last night. It’s too cool not to cover, but I have a deadline to meet, so maybe you ought to just check out the event page. For the lazy:

Join local poets, artists, and filmmakers (collaborating towards an exhibition at PS1 in April) for a semi-impromptu reading/event [TONIGHT] at 5:30 at r.s.v.p.!

But wait! There’s more: This event is part of the third annual “Small Businesses Have Big Hearts” campaign. Small businesses (like r.s.v.p.) across Downtown Iowa City will be offering in-store specials to patrons who make a cash donation beginning February 8th and concluding on February 18th. All donations will support the “Make Change with Your Change” parking meter donation program which supports local social service agencies. Over the past two years, Small Businesses Have Big Hearts has raised more than $4,000 for charitable causes. Participating downtown businesses will remain open until 8:00 p.m. on Thursday, February 9th to help kick off the 2012 campaign.

The Iowa City Pride Committee will hold a showcase of local musicians in support of this year’s Pride festival. The cause is great and the talent ain’t bad either (it freakin’ rules). Here’s the lineup:

Sam Locke Ward and his band, Cop Bar are going at it again with their brand of spastic thrash metal alongside four other heavy hitting acts. Cop Bar released their album, No Justice Just Law in October and it’s everything that’s right with hardcore music. 25% of the album art is a handwritten advertisement, “20 SONGS 20 MINUTES $3!!!WHAT A DEAL” and the album itself is a reminder that a song really doesn’t have to be any more than 16 seconds long. I would also like to mention that just yesterday Los Voltage packed the house down at Public Space One for Little Village Live and they totally killed it. The Mighty Accelerator, Fetal Pig and 100 Degrees Centipede also gather from around the state of Iowa to make some noise.

With song titles like “How Many Biscuits Can You Eat?”, “Drink Lotsa Whiskey” and “Redneck Tailgate Dream” you know that Split Lip Rayfield is straight out of the heartland. Wichita, Kansas to be exact and they’ve been playing their quirky, fast paced bluegrass for over a decade. The trio’s instrumental arrangement includes banjo, mandolin and a home-made gas tank bass (instructions for building your own are even included in the liner notes of the latest album) and they’re all impeccably talented at their respective folk instuments. Their most recent release, I’ll Be Around (2008) is dedicated to the memory of Split Lip’s former guitar player, Kirk Rundstrom who had lost the battle against cancer just a year prior. The loss continues to resonate in their music as the band dedicates every live show to Rundstrom as well. Acclaimed Colorado pickers, Head For the Hills open.

The Midnight Movie Series at the Englert hits us with another staple in American cinema this weekend. I put off watching Casablanca for far too long, mostly because it was my mom’s favorite movie which meant it was probably totally lame. When I finally grew out of my youthful defiance, I sat down, popped in the VHS and got schooled in why this film is a classic. The 1942 film follows the story of a reunited couple attempting to run off together in a dangerous African backdrop during WWII.

Canadian rapper/playwright, Baba Brinkman began with a one man rap show about Geoffrey Chaucer’s The Canterbury Tales in 2004. The show was a success and he was subsequently commissioned to do a show about Darwin’s theory of evolution which is what he is performing on his current tour. All lyrics in the show are fact checked by scientists, but goes beyond the realm of science, covering the history of hip hop, human nature and can often get very self referential. The show is presented by Iowa City Darwin Day in collaboration with the University of Iowa Pentacrest Museums, University College, College of Liberal Arts & Sciences, University Libraries, and the Englert. For more information visit iowacitydarwinday.org.

That’s all for this week. Take ‘er easy!