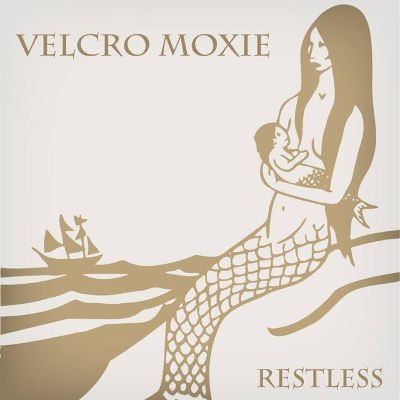 Velcro Moxie is a rock and roll band fronted by a remarkable voices of Jasmine Terrell and Nick Carney. They’ve become a live mainstay at the Yacht Club since getting together in 2011. If you live in Iowa City when a band plays the Yacht Club frequently, they get pigeonholed as one of “those” bands—a bit jammy, a bit hippy dippy—but that’s usually an unfair judgement, both of the bands and of Yacht Club.

Velcro Moxie’s debut album, Restless, is very much a rock album that doesn’t stray far from the band’s live sound; slashing, overdriven guitars, big splashy drums and deep, driving bass. Emily Rod’s bass gets more love on the album than is usual for rock records—maybe Terrell’s tenure with the hip hop group J Trey has something to do with that. Rod’s playing is relaxed and tight with Josh Grace’s drums. But particularly on “Last Song,” Rod’s bassline goes way beyond marking the chord changes with almost baroque melodic flourishes, pushing the energy level well out of ballad territory.

Front and center on Restless are Terrell and Carney’s singing. Terrell has one of the strongest voices on the Iowa City scene: powerful, fearless and always perfectly on pitch. Carney’s voice mixes well with Terrell’s, and he’s a strong enough singer to take the lead. They work well together, but Terrell has one of those blow the doors off, burn the house down, rock and roll voices. Keeping up with her challenges Carney to match her power; at times they sound like they’re trying to shout each other down, but somehow it works, musically, especially on “Street Walker” where they both seem ready to explode.

Though Velcro Moxie doesn’t mention them as an influence, the dynamic between Terrell and Carney reminds me a lot of Jefferson Airplane’s Marty Balin and Grace Slick, who at their peak could upstage anyone in the San Francisco scene. Velcro Moxie has a lot of heart, fire and jump-out-of-your-skin energy; and the best moments on Restless makes it hard to sit still.