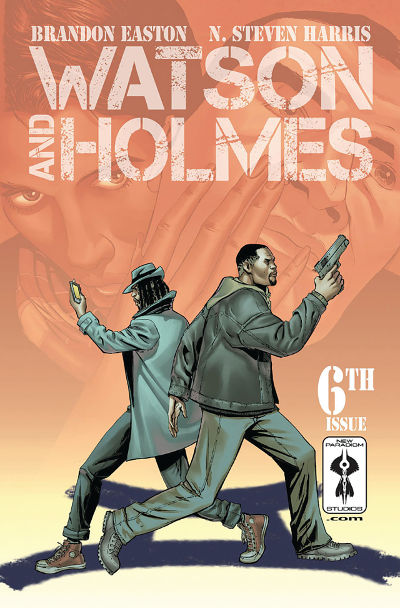 Writer Kent Bollers and artist Rick Leonardi invite you to look up Sherlock Holmes at a new address. Oh, the detective still resides at 221B Baker Street. But in Watson and Holmes, Baker Street isn’t in London—it’s in Harlem.

In the crowded landscape of recent and ongoing Sherlockiana, Watson and Holmes stands out because the famous friends are reimagined as black men solving crimes in contemporary New York City. Watson, whose top billing in the title hints at the characters’ more equal footing in this imagining, is a war veteran and medical intern who meets Holmes when the latter bursts into a hospital emergency room seeking information from a patient. In short order, the two team up, facing down danger and unraveling a twisty plot over the first four issues of the series.

While intrigued by the concept, I was worried in the first issue that perhaps Bollers and Leonardi were too concerned with hitting the standard marks that Sherlock fans expect: We get our first “It’s elementary” just a few pages in; the “irregulars” (Holmes’ motley band of young helper+s) appear soon after; and Holmes shouts, “The game’s afoot,” before the issue’s end. But we also get a Sherlock Holmes with dreadlocks, a couple of funny “‘Sup, Holmes?” moments and a nicely handled recurring hint of a pervasive danger to come.

Leonardi’s art, richly colored by Paul J. Mendoza (and by Archie Van Buren in the fourth issue), is sometimes quite detailed and sometimes rather impressionistic. In both cases, he communicates the mood and action of a scene well. For example, in the opening pages of the first issue, he established both the frenzy of an emergency room and the quiet grief Watson feels over the death of a child. 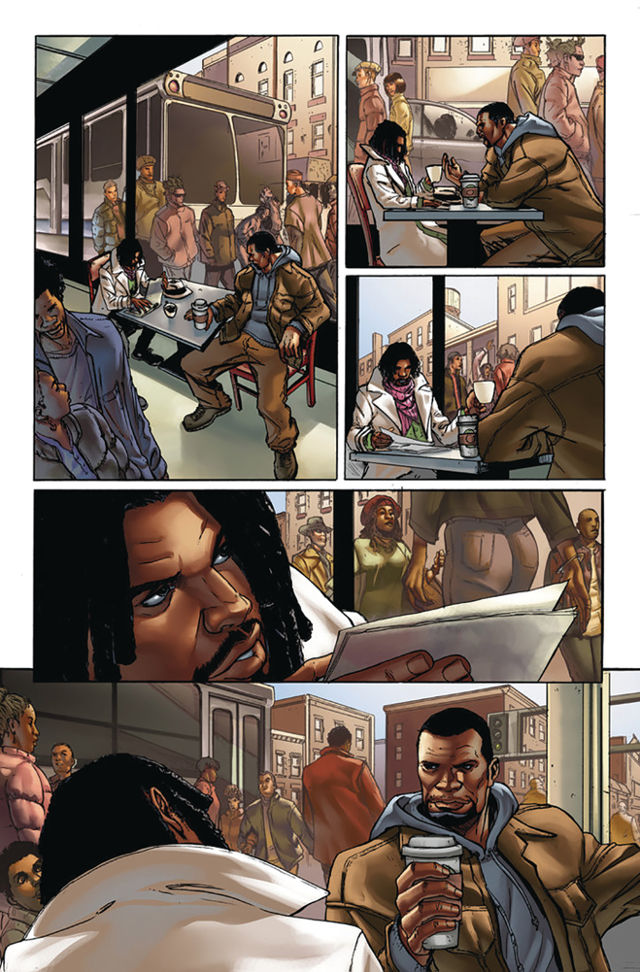 Bollers and Leonardi find a solid rhythm over the course of the first four issues. Holmes draws conclusions and Watson takes action (often rather more violent action than readers of the original stories might remember), and their burgeoning partnership feels authentically developed rather than merely required by the source material. There may be more action than signature Sherlock deduction, but Holmes is still portrayed as a fellow who sees what others do not and is able to put those observations to quick use. His insights drive the action, which Leonardi vividly depicts.

The fourth issue closes with a return to the problem first presented in the opening pages of the first issue: Why are babies being left in dumpsters around the city? Watson and Holmes tackle this mystery in the fifth issue.

Larry Stroman handles the art for issue five, and his style is a bit crisper than Leonardi’s, but still in keeping with the book’s overall tone. The wrapping up of a mystery in one issue, rather than four, changes the pace, but Bollers still finds time to deepen Watson’s backstory while bringing a potential nemesis’s name fully onto the page for the first time. Holmes’ backstory remains largely unexplored in these first five issues—collected as Watson and Holmes: A Study in Black—but Bollers has dropped some hints that seem ripe for further exploration.

The sixth issue was written by Brandon Easton with art by N. Steven Harris, and its standalone story centers on the death of a politician’s wife. Toward the issue’s end, our heroes share a conversation meant to inform the reader of certain unpleasant facts in the real world. It reads a little too much like a public service announcement rendered as dialogue, and the author’s afterword makes it clear that he wants to be sure you don’t miss the message. Still, the story he has to tell works well. Harris’ art is solid and lifelike, though he draws heads that seem to rest uncomfortably upon their necks.

A seventh issue was scheduled for January but did not appear, and the series has gone on hiatus as the creators plan to retool its distribution. The book, which was initially funded through a Kickstarter campaign and debuted as a digital-only comic, will return to its digital roots for individual issues with physically published collections to follow. In an interview for DiamondBookShelf.com, Brandon Perlow, whose New Paradigm Studios publishes Watson and Holmes, suggests that the next several issues will feature more standalone stories by various authors and artists leading up to a new, longer arc written by Bollers.

I’m hopeful that the title can survive the transition. With luck, current readers will continue to seek it out once it returns and new readers will continue to discover it. In addition to the physical collection, all six of the initial issues (including alternate black and white versions of the first four) are available digitally from Comixology.com. I encourage you to take the trip to this new 221B Baker Street.