The first part should be obvious. Delaney stands no chance of winning the Iowa Caucus. Or finishing second. Or third. He won’t win a caucus or primary in any state.

But the conventions of American political journalism prevent reporters from acknowledging certain obvious things. In the same way Donald Trump’s blatant racism is described with evasive euphemisms such as “racially tinged language,” Delaney is called “a long-shot candidate,” even though it is obvious he will not be elected president in 2020.

Delaney shows no signs of dropping out before the Feb. 3 caucus, despite being left out of the last debate. And the one before that. And the one before that. Delaney bought TV airtime in Iowa during the Jan. 14 debate to run a commercial reminding people he’s running for president. He could do that, not because he has a strong donor base — he doesn’t — but because he’s a multi-millionaire who wants to be president.

Which brings us to why John Delaney can’t win in a metaphorical sense.

As one impressive Democratic candidate after another has dropped out of the 2020 race, citing fundraising problems as a major reason — Kirsten Gillibrand, Julián Castro, Kamala Harris, Cory Booker — there has been increasing attention focused on self-financing rich men trying to buy the presidency. But all the attention is focused on billionaires Tom Steyer and Michael Bloomberg. 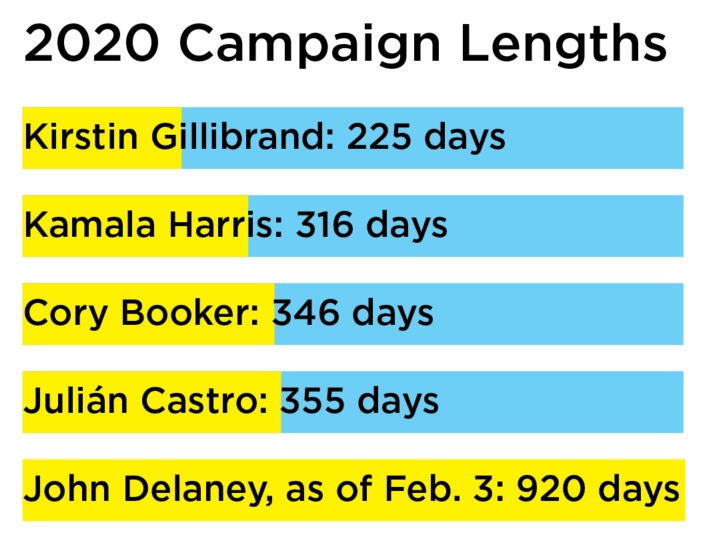 That’s not fair. John Delaney should be the poster-boy for this phenomena. Unlike Steyer and Bloomberg, Delaney already has experience buying his way into an elected office at the federal level. He was a two-term congressman who represented Maryland’s 6th District. A Democrat was always going to be elected to that district in the first election after the district’s boundaries were redrawn following the 2010 census, and Delaney, in his run for office, self-financed his way to a win using part of the vast personal wealth he accrued in his business career. (He started and sold two financial services companies.)

How vast is that personal wealth? In 2018, Delaney’s final year in Congress, Roll Call listed him as the sixth wealthiest member of Congress. Using financial disclosure documents, the paper estimated Delaney’s net worth at $92.6 million.

Those millions allowed Delaney to set a new record by declaring his candidacy earlier than any other presidential candidate in American history. Delaney announced his 2020 run in a Washington Post op-ed on July 28, 2017. By the time Caucus Day arrives, he will have been running for president for 920 days.

Delaney has been steadily campaigning since the summer of 2017. Data journalism site FiveThirtyEight averages leading polls to determine a candidate’s overall support — Delaney is at 0.1 percent. That’s actually better than his standing in the most recent Iowa Poll; Delaney received 0 percent support from likely Democratic caucus-goers.

But none of that matters as long as John Delaney still wants to be president, and is still willing to spend his own money. And he has been willing to spend. Delaney has contributed more than 90 percent of the money his already 900-plus-day campaign has received.

And yet, despite the fact he tapped his bank account to get himself a seat in Congress and has been lighting millions on fire to fuel a comically long and unsuccessful presidential campaign, Delaney doesn’t rate a mention in stories about the 2020 phenomena of rich men trying to buy their way into office. No one takes him seriously. So why run the marathon?

“I’ve stayed in this fight for you,” Delaney said in the commercial he ran during the Jan. 14 debate. “I’ve done more events than any candidate and I know in my heart that our extraordinary nation remains one of unlimited potential and that my unique ideas on infrastructure, trade, climate and national service are needed to help realize it.”

His ideas call for the sort of incrementalist changes that Joe Biden and Pete Buttigieg have had success promoting (and on which Steve Bullock, John Hickenlooper, Seth Moulton and Tim Ryan based their now-dead 2020 presidential campaigns), and led to one of his few moments in the national spotlight.

After listening to Delaney explain that Democrats shouldn’t be pushing for major economic changes during the July 30, 2019 Democratic candidates’ debate, Elizabeth Warren responded with what the New York Times described as “the line of the night.”

“You know, I don’t understand why anybody goes to all the trouble of running for president of the United States just to talk about what we really can’t do and shouldn’t fight for,” Warren said. “I don’t get it.”

Whether Warren or anyone else gets it doesn’t matter, because as long as Delaney can pay the bills, he can keep his campaign going.

According to Aristotle, everyone desires to be happy and that’s the ultimate reason for all our actions. In the ’90s, a number of very rich men (and they were men) busied themselves with long-distance hot air ballooning. More recently, the very, very rich have developed an interest in space travel. For other wealthy Americans, starting a charitable organization named after yourself and hosting fundraising galas suits their fancy. Everyone needs a hobby.

Instead of doing those things, John Delaney is running for president.

But the guy just can’t win.

A shorter version of this article was originally published in Little Village issue 277.