In the planning stages for Riverside Theatre in the Park, which began on June 14 and runs through July 7, the production team had to devise a way to make the classic plays of Shakespeare’s Hamlet (1599) and Richard Sheridan’s The School for Scandal (1777) vibrant for contemporary audiences and also different from other recent versions.

Actors Christopher Peltier and Eliza Stoughton, who play Hamlet and Ophelia, respectively, were not daunted by the work before them. They have not only played these tragic roles before—they portrayed them in the same production, last year with Montana Shakespeare in the Parks. 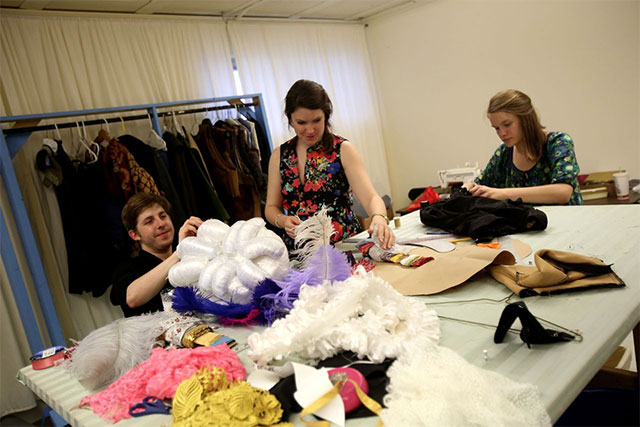 After touring with Hamlet for 75 shows in 59 cities, Peltier and Stoughton feel that their experience has given them unique benefits for playing their characters again with Riverside. Peltier notes, “You know the lines to start with. For Hamlet, that is huge. I can start playing around in rehearsal immediately.” While this seems like an obvious advantage, it is an important one for Hamlet because the character has around 1,500 lines. (This is about 40 percent of the total lines in the script.)

Stoughton is excited to have the opportunity to continue to grow the character of Ophelia. “I was so happy with what I did last time, and now I can go further. I can play Ophelia again, but more ‘grown up.’” Peltier and Stoughton both said that they now have an established vocabulary for working with each other, which makes communication easier. 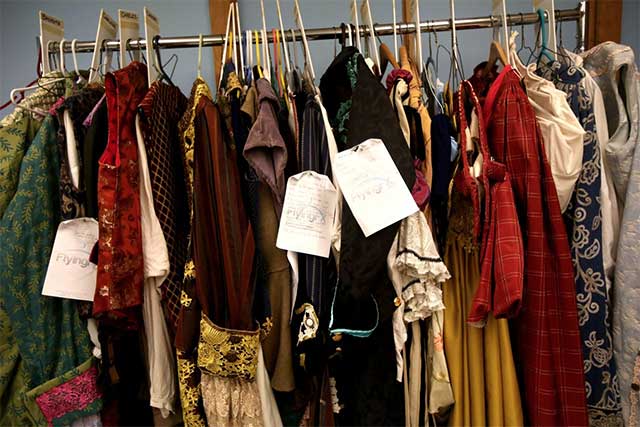 Peltier and Stoughton also acknowledge the challenge of having to play the characters in a new production. They risk falling into old habits, and Peltier has to ask himself, “Am I doing this because it’s the right choice, or because it is something I’ve done before?” The Montana Shakespeare in the Parks production set Hamlet in the 1920’s a la The Great Gatsby, while Riverside’s production takes place in 1599. The Montana production also had a cast of young actors, while the Riverside production casted actors who are roughly the same ages as their characters, which Peltier feels adds “more depth” to the show.

Each director also focuses on different themes in each play. Hamlet director Kristin Horton edited this version of the play herself, and Stoughton feels that under Horton’s direction, “Everyone is motivated by love, which is a wonderful place to come from.” Horton also focuses on grief, posing the question, “What happens when you suppress the need to grieve?”

Peltier and Stoughton also have roles in The School for Scandal. Director Theodore Swetz conducts rehearsals with such depth that they feel like they are participating in a “master class” in Restoration comedy—a term covering English comedies written between 1660 and 1685 and revived in the late 18th Century, and a genre with which most contemporary actors have little experience. These types of comedies satirize social customs and often involve scandalous behavior. In this style, the acting is very presentational and exaggerated, with almost no “fourth wall” separating the actors and audience.

In The School for Scandal, the costumes are as outrageous as the acting style. Costume designer Lauren Roark took her inspiration from clothing styles of the 1780s. The women’s dresses are based on the polonaise, a style that involved a large full skirt that has ruffles and ruching to reveal an underskirt or petticoat, as well as a hemline that is short enough to expose shoes and ankles. Roark said, “The silhouettes for women are a real challenge. It’s the grotesque caricatures versus real humans.”

For inspiration, Roark went to libraries to find images and articles from the time period. In particular, she thought that diaries and political cartoons were useful for this production—diaries describe what people really wore, while political cartoons provide the exaggeration necessary for a comedy. She also worked carefully on the color combinations, saying, “I was picking colors that emphasize humor and grotesque character distortions. What odd combinations can I pick that are ‘on the edge of too much?’”

Roark and director Swetz worked together on the costumes at the University of Missouri-Kansas City, where Swetz is head of the acting program and Roark is in her third year of the Master of Fine Arts program in Theatrical Costume Design and Technology. For six weeks, Swetz and the production team designed the production concept, checking in with Roark once a week on the costumes. After sketching the costumes Roark oversaw their construction, including going to Hong Kong to construct the menswear. She enjoyed the experience, saying, “I got to learn different customs and ways people work.”

Ultimately, Roark’s comment can apply to the entirety of Riverside Theatre in the Park for the actors and production team. Though the plays have been performed many times, the people involved ensure that everybody can always learn something new.

Due to flooding in City Park, Riverside Theatre at the Park has been relocated to West High Auditorium, 2901 Melrose Ave. For information on showtimes, ticket prices, location and accessibility, visit riversidetheatre.org.

Jorie Slodki earned her MA in Theatre Research from University of Wisconsin, Madison, and has past experience in acting, directing and playwriting.