On a Saturday afternoon, when the sun shimmers in the slight breeze of summer, two men huddle close in the darkness. In a back corner of the Deadwood, far from the reach of that sun and its shine, their faces are tense with concentration. Their eyes flit in all directions, lips pursed and jaws set. Occasionally one of the men swears and snarls as though bitten, arms thrown up wildly. His friend murmurs consolation, then slides into his place and sets his stance. Lights reflect off his face and his chin jerks upward as he releases the plunger and his mind is off chasing the silver ball.

Pinball’s history, like a couple of other national passions—jazz and baseball—was born in the early part of a previous century, and has suffered periods of ill-repute and so many facelifts that it is hardly recognizable today from where it started. Once a bar-top game of chance, wherein the player had no control over the ball’s course over a wooden playing field speckled with patterns of tiny pins, it is now a machine that has more parts, wires, lights and man-hours built into its construction than a midsized Ford (and which is still made by hand).

The two men I’ve described in the intro I’ll refer to as Player One and Player Two. Player One asks that I not use his name since he is supposed to be finishing up an afternoon’s work at his office rather than sipping a pint and tapping away at the flippers of Medieval Madness. Player Two merely mumbles his name, watches me out of the corner of his eyes and makes it clear that he’s not interested in talking, and probably not in being interviewed. His suspicion is fair; I am not holding a drink, I am six-one, two hundred pounds, bearded, with eyes like manhole covers and the rosy pallor of a drowned man — I might not answer me either, except that I look like every other indoor kid.

“I just don’t think that pinballers are really all that social, which is funny because I rarely play alone.” says Player One. Player Two nods with his back to us as he gives the table a violent jolt. It’s the paradox of the pinball player: together alone. 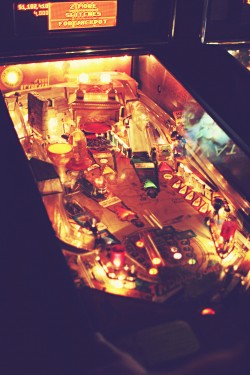 Like most barroom religions, pinball has its own language and rites, and its practitioners come from varied walks to worship at these altars of glass and light. Here, you are as likely to find a middle-aged man on an extended lunch break as an early twenty-something who has just shed the thousand-hour Xbox stare.

The notion of playing alone yet all together was a noncommittal form of socialization popularized by the arcade. The home gaming system effectively wiped out arcades, and as playing went online it inverted this paradigm. Now we are all alone playing with each other. Sure, you can now get your ass handed to you in an online shooter by an eleven-year old in Tupelo. But when it comes to pinball, you have to leave your house, have to hunt it down.

It can be hard to meet fellow players of pinball and harder still to strike up conversation, something that Aaron [just ‘Aaron’], founder of Iowa Pinball Club is looking to change. “The Iowa Pinball Club is designed to get pinball enthusiasts to talk with each, to communicate,’ says Aaron. With his site, iowapinballclub.com, Aaron is looking to entice fellow players to share information, tips, favorite spots, upkeep, etc. “In Iowa there is no communication between fans, to let each other know what’s out there,” Aaron explains.

Many cities and states have organizations, bars and clubs dedicated to the preservation of the silver ball. Aaron has been a part of some of them, and is using his club experience to connect Iowans to each other, getting players to share buying tips, reveal businesses where great machines are hidden and essentially give away their secrets. Not always the easiest task. But such a community has its perks: maps to various establishments and machines, official high score keeping, tournament play. Aaron offers this invite to novice and professional alike, “We’ve got 31 members and we’re looking for more like-minded folks.”

This game of individual skill, one where player and machine conspire only to defeat their own previous efforts, has always been played in public. The player’s myopic goal to be better, go further, is accented by the machine’s bells and bucking and light show. The machine was designed to always attract attention. 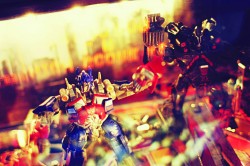 In the early forties, a definitively American trait was directed toward pinball: senseless, deafening public outcry. Seen as a game of chance for the poor, and therefore gambling, the tabletop version was swiftly banned. Next only in popularity to photos of busted stills, politicians lined up to have their pictures taken kicking a pinball game into the town’s landfill. But this outrage did not put off the manufacturers—they simply stopped selling machines in the US and shipped them instead to the UK and Europe, where the game’s popularity exploded among the café set. The industry took off overseas, but the majority of production stayed anchored in Chicago, where the last operational company, Stern, still continues today.

What brought the game out of the speakeasy era was the simple addition in the ‘50s of a pair of flippers controlled by button triggers. This element of control did not eliminate the chance that had been the initial allure, but tempered it with the even more beguiling promise of skill. This is when pinball became, in essence, the game we have now: one that is simple to learn, easy to operate and nearly impossible to master.

This combination set off a frenzy on both shores of the Atlantic; American pinball was legal again and soon occupying every corner store, laundry, pizza parlor and corner of the American psyche. The pinball game encapsulated every aspect of the growing leisure industry: Its cost was low enough for everyone to operate, repeated usage allowed for the development of a particular skill-set and a dedicated amount of time taken from the pursuit of any other distraction created a self-rewarding waste of time.

Its popularity has risen and waned as public venues became scarce; the pinball machine is the only game that could never be fully assimilated into the private areas of our lives. And while few of us can afford the eight thousand dollar price tag that a quality machine costs to buy outright, no amount of programming could translate the magik of wood and steel to a home gaming system. The pinball table then remains tucked into the corners of our public lives, waiting for us to ease a couple of quarters into it and step out of the world for a few stolen minutes.

Chris Wiersema is right behind you. Seriously.