Though the flood of 2008 devastated sections of Cedar Rapids, the rebirth of the downtown, Czech Village and New Bohemia districts make the losses easier to take. Post-flood, a restaurant renaissance has occurred. Diners less than enthused by chain restaurants are now spoiled for choice with new eateries featuring creative menus and eclectic beverages.

The Pig & Porter opened in the NewBo area mid-summer; co-owners Will Monk and Matt Melone, no strangers to the Cedar Rapids restaurant scene (having met while working at Cobble Hill, downtown), have created something unexpected and interesting in their new venture.

The menu, featuring local ingredients, changes seasonally and offers small plates of snacks and appetizers to share, medium plates for one or two people to enjoy and large complete meal selections designed to serve two (but which can easily serve more). The craft cocktail menu echoes a Prohibition-era speakeasy’s offerings and is incredible. 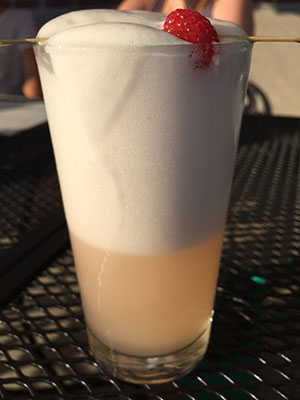 During a recent visit with my book club (I did read the book, thank you), I quickly settled on the Buzz & Fuzz cocktail. A combination of Tito’s vodka, lemon, honey, raspberries, mint and egg white, it was light, frothy and subtly fruity. It was so delicious I ordered a second before finishing the first.

I had a more difficult time making a dinner selection. Absolutely everything on the menu appealed, so I decided to try the most unusual sounding item offered — a tuna dish so original I knew I would never find it duplicated elsewhere. A salad/entrée hybrid, it featured raw tuna, watermelon, green olives and tangerine oil, a handful of cherry tomatoes, a sprinkling of Marcona almonds and a garnish of tiny flowers. It was visually stunning and tasted amazing.

The crisp sweetness of the watermelon melded perfectly with the rich, savory tuna while the tangerine oil, reminiscent of a light mellow honey, balanced the saltiness of the olives. The Marcona almonds added the perfect crunch to the richly textured dish.

The Pig & Porter is a fantastic addition to the growing list of innovative restaurants in Cedar Rapids, and I look forward to working my way through the impressive menu.