Due to an influx of aspiring presidents every four years, many classic Iowa foods have been imbued with politics, from Iowa State Fair pork on a stick to Hamburg Inn pie shakes — even ranch! But Iowa has more to offer than the Midwest staples consumed on-camera by candidates pandering to the nation’s first caucusers. As White House hopefuls make their final swings through Iowa, here are some delicious Iowa City/Cedar Rapids-area foods to suit their tastes. 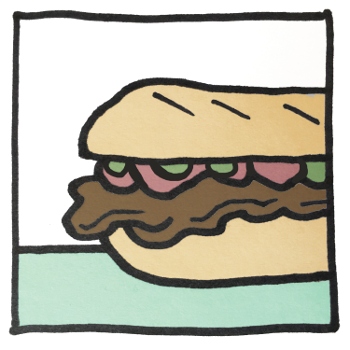 The Colorado Senator told the New York Times his favorite comfort food is an Italian sausage sandwich from the Pueblo, Colorado restaurant Pass Key, which bills itself as a “family-style joint serving Italian and American comfort food in unfussy digs.”

Try: the Italian Beef Sandwich or Italian Beef Combo from Gianna’s Italian Beef (375 3rd Street SE, Cedar Rapids). These savory sandwiches — served in a casual setting and with a side of shoestring fries or gravy bread — should satisfy the long-shot candidate from the Centennial State. 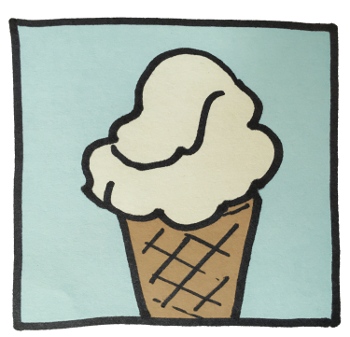 The former vice president is photographed eating ice cream cones nearly as often as he’s caught pressing the flesh with voters. His favorite flavor is chocolate-chip ice cream, according to PBS. 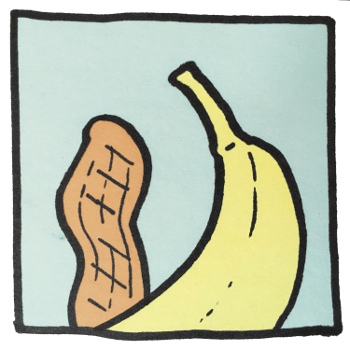 The New York mayor who infamously tried to ban sugary sodas has, it turns out, a taste for junk food. NBC New York reported that Bloomberg loves Cheez-Its, salty popcorn, Big Macs and, perhaps strangest of all, burnt bacon and peanut butter sandwiches. 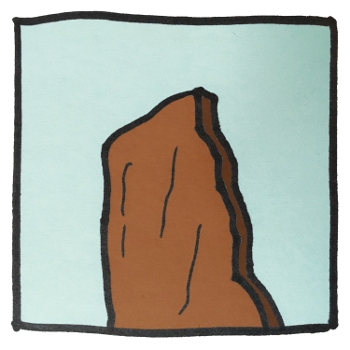 Remember back in 1963 when George Harrison mentioned in an interview that he liked jelly beans, then fans started pelting him with jelly beans at concerts? Well, the former mayor of South Bend, Indiana is no Beatle, but he is, apparently, getting handed bags of beef jerky by supporters after it got out that he had a taste for it.

Try: Iowa Smokehouse jerky. Based out of Albia, Iowa, but sold at grocery and convenience stores all over the state, Iowa Smokehouse has a distinctively plain white and black label and perhaps the most delicious beef sticks in the world. From brown sugar to spicy jalapeño jerky, Buttigieg is bound to find a dried meat to suit his tastes. 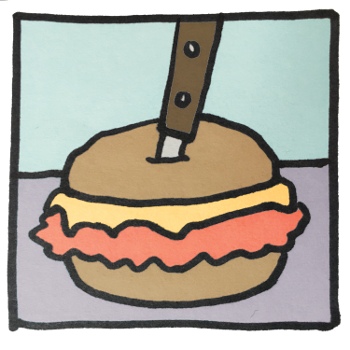 Delaney’s choice of snack is distinctive in its specificity and literal white breadedness: “Grilled chicken sandwich from McDonald’s, no sauce,” he told the Times. “Two of them.” I guess the former Maryland congressman will be emptying out the White House packet drawer when he takes over.

Try: the Crispy Chicken Sandwich from Pullman Bar and Diner (17 S Dubuque St, Iowa City). Sure, Iowa is home to nearly twice as many McDonald’s franchises as it has counties (all of which Delaney has visited in the course of his two-year campaign — counties, that is, not McDonald’ses), but you can only get a Pullman chicken sandwich in one place. The sandwich is so hearty, one needn’t order two — but I wouldn’t blame Delaney for doing so. Spiced honey dressing is optional. 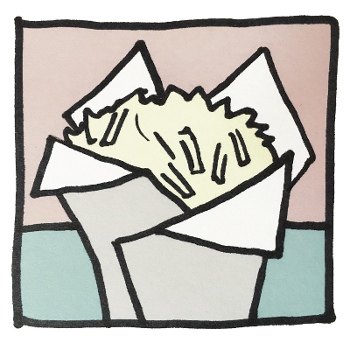 The last remaining vegan candidate (happy sails, Cory Booker), Sen. Gabbard won’t be helping herself to beef jerky or chicken sandwiches. The candidate has admitted to having a sweet tooth and enjoys vegan cupcakes.

Try: a Vegan Double Coconut cupcake from Scratch Cupcakery (927 E 2nd Ave, Coralville). Scratch bakes up at least 20 varieties of vegan cakes, but the Double Coconut, including a vegan buttercream, has the slightest of tropical touches, which may prove comforting to the Hawaiian senator while trudging the wintery campaign trail in Iowa. 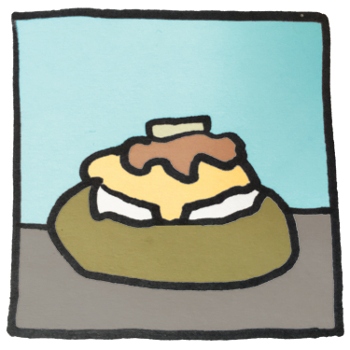 This Minnesota senator enjoys simple pleasures as much as delivering sly quips from the podium; asked her favorite comfort food, she responded confidently, “A baked potato.”

Try: a potato off the Timmy Flynn’s Red Pepper Deli (517 S Riverside Dr, Iowa City) ’tater menu. There is no shortage of local restaurants offering baked potatoes as a side, but few present their spuds with the panache of Pepper. From simple butter or melted cheddar cheese potatoes to the Roast Beef and Taco Tato, their spuds can serve as a pre-speech snack or full meal from the campaign bus. 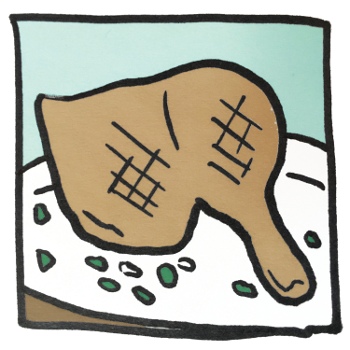 Described by colleagues as a “foodie,” the former governor of Massachusetts considers cooking a relaxing hobby, and is known for catering his own fundraising dinners. “When I get my life back,” Patrick said back in 2012, he wants to farm his family’s land. “I’d like to get chickens, for the eggs, and maybe grow our own vegetables.”

Try: one of the area’s most renowned farm-to-table restaurants, Rodina (1507 C St SW, Cedar Rapids). Similar to Nudel, a Lennox, Massachusetts restaurant and one of Patrick’s favorites, Rodina’s menu rotates with the seasons. But in an interview with Little Village in December, Rodina co-owner and chef Samuel Charles recommended a few of their staple dishes: the Roasted Half Chicken, the Pheasant and Mushroom and the Potato Pancake. 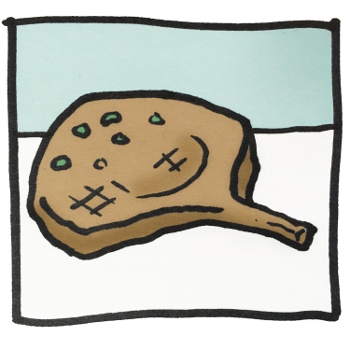 Sen. Sanders famously loves the Vermont-based Ben & Jerry’s (and has more than one flavor named after him), but in 2016, he said his favorite food to eat (and grill) on the road are pork chops. Well, you’ve come to the right place, Bernie.

Try: the pork chop at Iowa Chop House (23 E Washington St, Iowa City) — 12 ounces of juicy deliciousness, and nine options for enhancing it, from blue cheese crust to bacon butter. While you’re in the heart of downtown, feel free to visit any number of local, definitely not billionaire-owned businesses and nonprofits! 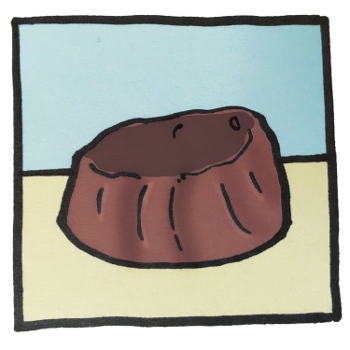 One of Steyer’s lesser-known enterprises is TomKat Ranch, a 1,800-acre grass-fed cattle ranch in the San Francisco Bay area, founded by Steyer and his wife Kat Taylor. The ranch is a kind of philosophy in action for the billionaire philanthropist, who has advocated for a transition to regenerative, carbon-recycling agriculture. 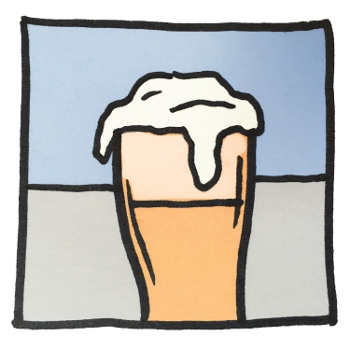 After Instagram Live-streaming herself hanging out at home and drinking beers on New Year’s Eve, 2018 (just before announcing her candidacy), Warren was questioned about her choice of brew: Michelob Ultra. The Massachusetts senator admitted it’s “the club soda of beers,” but her favorite nonetheless.

Try: Iowa Eagle American Lager from Iowa Brewing Company (708 3rd St SE, Cedar Rapids). Iowa Eagle is a light, crisp beer, but infinitely more satisfying than an Ultra. Plus, it’s ’Merican as hell, from the beer’s style to its craft brew status to the bald eagle on its label. Plus, a portion of the proceeds from the beer benefit the University of Iowa Stead Family Children’s Hospital. All in all, a better look, Senator. 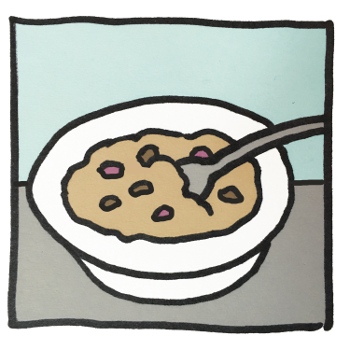 Yang had one of the least sexy answers to the New York Times’ favorite-comfort-food question: KIND granola bars. But to be fair, KIND’s grain and nut bars are tasty, filling and convenient for the road.

Try: Slipstream Granola, available at New Pioneer Food Co-op (locations in Cedar Rapids, Coralville and Iowa City). Made down in Fort Madison, Iowa, this organic, non-GMO, honey-forward granola grew out of a partnership between Heidi Weiser, a pastry chef, and Michael Winnike, owner of the bike shop Slipstream Cycling. The granola was so popular with Winnike’s shoppers, he and Weiser decided to start their own company. The combination of delicious, fortifying ingredients and entrepreneurial spirit in Slipstream Granola will no-doubt fuel Yang, a decorated businessman, on his quest for the White House.