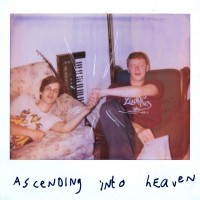 “I have swallowed the sky/through only a straw”—the 56-second opener of Ascending Into Heaven is a quiet moment of organ and silly psychedelic lyrics that ends without resolving to the tonic. It gives no clue to the sloppy, unhinged pop songs that follow it. The rest of the songs make me think of middle period Pavement, but where Pavement grooves, Huge Lewis lurches and yelps.

Music this carefully constructed and carelessly implemented could be off-putting, but Huge Lewis isn’t. Part of their aesthetic is to ride right up to the edge of being annoying. They hint at this by naming themselves after the second most annoying pop rock vocalist ever, Huey Lewis (the first being Eddie Money). Other Iowa City bands set out to damage their audience’s hearing without bothering to properly tune their guitars; it’s no innovation. But Huge Lewis imbues every chord progression on Ascending Into Heaven with tricky modulations that go back to the Beatles and Big Star. Nothing here is a two-chord piss take.

Recorded as it is in a deliberately primitive manner by Amana-based pop weirdo Ian Williams, I can’t really catch most of what they’re singing. From what I could make out, the album closer “Curse Words” contains no actual curse words. It’s rendered in syllables so tortured they might as well be in Tagalog or Old Low Norse. Towards the end I catch the singer wailing “No social conscience! No consciences!” Trying to follow what’s being sung is like making sense of the fine print on the Dr. Bronner’s peppermint soap bottle: It means something, but the effort of figuring it out makes you dizzy.

All this slap-dashery hangs together, just. Lurking in this basement junk pile of an album is surprisingly sophisticated song-craft. There are bands (Jesus & Mary Chain comes to mind) that were ruined by achieving technical proficiency. Huge Lewis’ songs could actually survive more careful treatment, but they’re kind of great just as they are: both baffling and ingratiating.