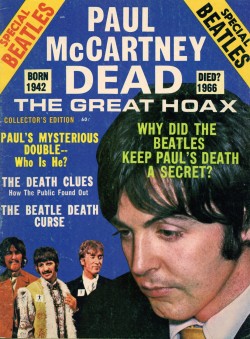 Did you ever hear about the “Paul is dead” rumor, involving the Beatles’ Paul McCartney? Did you know it originated in Iowa? Back in 1969, news spread that he died in a car accident and was secretly replaced by a look- and sound-alike. The story originally appeared in an Iowa college newspaper and fanned out through the counterculture’s underground papers and freeform FM radio. Time and Life magazines eventually ran with it, and soon legions of stoned hippies were pouring over the Fab Four’s albums in search of clues about McCartney’s demise.

On Sept. 17, 1969, Drake University’s student newspaper printed the first account of the musician’s alleged death. With “Is Beatle Paul McCartney Dead?” splashed across the front page of the Drake Times-Delphic, the hoax was primed to get attention. It initially spread through word of mouth, making its way out of the Des Moines area until someone in the gossip chain made a call to a Detroit radio station.

Like many FM stations of that era, WKNR was “freeform,” a format that allowed radio DJs to play, and say, just about anything they wanted. An 18-minute album cut, which would never ever be played on Top 40 AM stations, was as common as hearing extended “raps” by a radio announcer or the musings of listeners who dialed in.

Four weeks after the Drake student newspaper article appeared, a caller told DJ Russ Gibb that clues to McCartney’s death could be found in Beatles records. “What you’ve got to do,” the man said, “is play ‘Revolution 9’ backwards.”

A University of Michigan sophomore named Fred LaBour happened to be listening, and two days later he published an article in the Michigan Daily. LaBour was originally assigned to review the Beatles’ newly released Abbey Road album, but he took a different course after hearing that WKNR broadcast. His piece, “McCartney Dead; New Evidence Brought To Light,” struck a subtly satirical tone as it identified hidden messages in lyrics, album covers and backward messages. LaBour concluded the article with a wink: “The Beatles are building a mighty church, and when you emerge from it, you will be laughing … .”

By mid-morning, all copies of the paper had been snatched up, and at the end of the day the Michigan Daily went through two more press runs. The University of Michigan allowed the article to be reprinted in at least a dozen campus newspapers, and many more underground papers pirated it. The Detroit Free Press reported that, after the story appeared in the Harvard Crimson, a letter to the editor said it “has got us so turned on that none of the guys in the house got stoned last night.”

Within a month, “Paul is Dead” became a national story, despite Iowa’s distance from the country’s cultural centers. If not for the alternative communication network built by the 1960s counterculture, it is unlikely that the hoax would have made it out of Des Moines.

These Beatles rumors — combined with the fact that rock musicians were experimenting with tape technologies to achieve psychedelic effects — injected the concept of backmasking into the public imagination. This fantasy gained traction because it resonated with Cold War brainwashing discourses. Vance Packard first raised alarm bells about subliminal messages with his 1957 book Hidden Persuaders, which claimed marketers were placing covert commands in movies and television. Anti-rock religious crusaders Dan and Steve Peters drew on Packard’s thesis in their book Rock’s Hidden Persuader: The Truth About Backmasking, and they also cite Wilson Bryan Key’s 1977 bestseller Media Sexploitation. By looking at advertisements closely enough, Key argued, you could find everything from skulls and humping donkeys to the word SEX spelled out in ice cubes.

Key’s book revived the subliminal message meme just before rumors about backmasking in metal records began spreading in the 1980s. Throughout that decade, several parents sued heavy metal artists and their record companies. Aside from the lawsuit brought against Ozzy Osbourne (infamous for his song “Mr. Crowley” and his stint in Black Sabbath), the most prominent legal action involved Judas Priest. Two youths shot themselves after several hours of drinking, pot smoking and listening to the group’s albums, so their distraught parents filed suit. CBS Records and the band were accused of selling a “dangerous product”: the Judas Priest album titled Stained Class, which supposedly contained subliminal messages. The suit was dismissed after audio experts proved no such messages existed, but that didn’t quell the backmasking rumors.

Dozens of pamphlets and books — such as Jacob Aranza’s Backward Masking Unmasked and More Rock, Country and Backward Masking Unmasked — tried to expose these hidden messages. Aranza claimed that when the chorus of Queen’s “Another One Bites the Dust” is played backwards one can hear, “Decide to smoke marijuana, marijuana, marijuana” (a message so hard to decipher, one probably needs to be under the influence of the devil’s lettuce to perceive it).

In their book Rock’s Hidden Persuader, Dan and Steve Peters also pick apart recordings by Pink Floyd, the Rolling Stones and the sinister Electric Light Orchestra. The Peters brothers begin their book with an analysis of the White Album’s “Revolution 9.” This is fitting because, as I have suggested, we can trace the genealogy of the backmasking myth back to the Beatles. (By reversing the spoken “number nine” soundbite, it sort of sounds like “turn me on dead man” — and if you listen hard enough to other parts of this sound collage, I’m sure you’ll hear plenty of other weird stuff.)

The Peters brothers also based much of their research on Packard’s and Key’s books on subliminal messages in media, even though their research had been discredited long before the siblings wrote their batcrap-crazy books. Nevertheless, religious right researchers rarely found a debunked study or hoax they didn’t credulously cite.

“Whether these messages are Satan-created, or simply Satan-inspired,” Dan and Steve Peters write, “subliminal stimuli certainly must have the ‘Satanic Seal of Approval.’” Their proof? “One never hears of secular rock albums promoting secretly the gospel of Christ — or even simply wholesome thoughts, such as ‘Eat all your vegetables, Maynard,’ or ‘Would it hurt to visit your grandmother once in a while?’” Quite true, my Christian soldiers, quite true.

Kembrew McLeod will be spending the next month trying to discern the hidden message in Queen’s “Another One Bites the Dust.” Thanks to Dawn Frary and the Drake University Library for the archival image, and a special shout-out to all librarians: long may you rock!