PICs (People of Iowa City) is an interview series dedicated to Iowa City locals whose pasts and presents make our town what it is. If you know someone whose story, presence, dreams or visions color our town, please contact me or have them contact me at russell (dot) jaffe (at) gmail (dot) com. 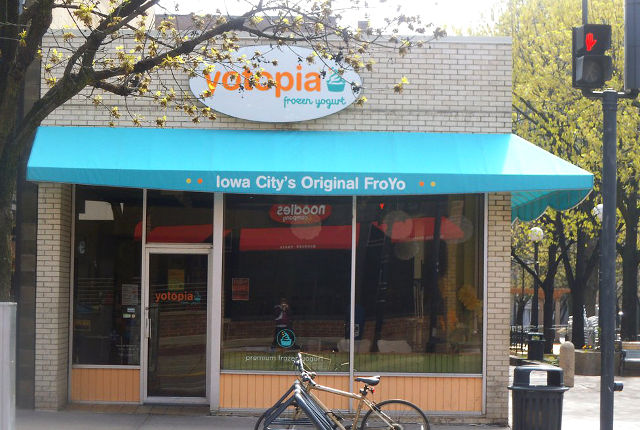 One might say Veronica Tessler is a woman possessed by sweet dreams. The founder and Iowa City business owner, a young woman with bright eyes and passion in her voice, sits down with me in the middle of the afternoon near the counter of Yotopia, the frozen yogurt emporium that opened in September of 2011. Its arrival brought a new, colorful (there are literally rainbows upon rainbows of candy to put on your self-serve yogurt) concept to the ped-mall entrance right in front of the Old Capital mall on Clinton Street. But nearly two years later, the cold, hard (soft?) fact is that yogurt seems to be a hot commodity.

“Three yogurt shops in town!” Veronica echoes. “Yeah, it’s a free market and it’s a free country. And that’s what happens when you have a good idea: people try to capitalize on what they perceive to be said good idea.”

And Yotopia is the original!

“That’s correct, yeah. Yotopia is an independent store, a creation of mine, and we are not affiliated with any other store or corporation.” I ask her if she has any kind of relationship with those other yogurt places, and she says, “No, none at all. They just opened up one day. Boom! They’re here! Both of them are chains.”

“I moved here from Virginia six years ago for a job in Muscatine at The Stanley Foundation, It’s a private operating family foundation that focuses on foreign policy and my portfolio included work related to nuclear non-proliferation and weapons of mass destruction.”

So yogurt was a logical next step?

“It was a very logical next step!” she laughs. “A seamless transition!”

Were there any elements of that job that made you want to run a business?

“I was traveling a lot for my job. The more I traveled, the more yogurt shops I came across, both here in the US and internationally. I just got this craving. I really wanted to open a business and I loved frozen yogurt and I wanted to see some change in the downtown community and bring a new idea to the downtown of this place I proudly call home.”

So why frozen yogurt?

“I took a bank loan to start us up; business is great…excuse me,” she tells me, cleaning a nearby spill while a smiling employee rings up a customer. “I’m manager and janitor,” she jokes.

It’s a busy early afternoon at the shop, and it gives me a minute to take in the atmosphere; Edith Piaf wafts from the ceiling to the kids in bright chairs holding bright pink spoons. There’s art strung along the walls, the bulletin board of local events, and the red, white and blue stars hanging from the ceiling. It really seems to be about as much of the “American Dream” as a business can get: local in every sense, built from the ground up, filling a (pretty delicious) niche, and at 39 cents an ounce, it’s pretty recession-proof. Moreover, Veronica seems extremely happy to be working and is passionate about her cold treats and the customers who eat them.

“It’s a busy day,” she beams from behind the counter.

When I came in, Veronica was opening a box from East Moline, IL with a look in her eyes like she’s opening a Christmas present. I don’t have the temerity to reach into the box now that she’s working, but I play with the packing peanuts. They are soft.

Veronica comes back and reaches into the box. “It’s something from my machine supplier…blade scrapers! These are fun pieces of equipment for our yogurt machines. These spin and make the yogurt creamy and tasty. This is a big day—it’s something for us all to celebrate!”

What does Yotopia do differently than the two other places?

“I’d like to think we take customer care more seriously. When we get customer suggestions for a flavor or a topping, we really go out of our way to try to get it for them. I got a request for organic dark chocolate chips, and I went out and found a supplier who carried them, and here they are. So we really try to please our customers, it’s our number one priority.”

“I’m a patron of the arts and I really support local artists’ work. Right now we’re featuring a photography exhibition by a local artist and we want to give back to the community, whether posting art in our store or being a part of the gallery walk, we also have frequent fundraisers where we give to charities and student organizations. It’s the community that has supported us, and a big part of our vision is giving right back to them.”

“Also, on the weekends, downtown can get pretty rowdy. So I hire a doorman to keep the peace. I want our patrons to know they’ll be safe eating frozen yogurt here,” she laughs.

Do you have any new, exciting yogurt and/or toppings plans?

“We’re actually now sourcing all our yogurt locally from a family dairy farm in Iowa, and that’s the newest phase of our business: focusing on locally sourced yogurt. And of course, we’re always on the lookout for amazing new toppings. My new favorite, most recent edition is Lucky Charms marshmallows…”

O SNAP! your humble Little Village interviewer screams uncontrollably, as if the sense memory reaction had been long frozen within me, ready to gush forth in a thick, custard-y mass.

“We actually picked through hundreds of boxes of Lucky Charms and took out all the marshmallows,” Veronica smiles at me. “It’s great to hear you respond like that.”

Is there too much frozen yogurt in Iowa City?

“I would say that we are at a point of saturation in the market. Tasty, sweet saturation. In addition to the three frozen yogurt locations downtown, I think we have a dozen places for cold or frozen treats within a mile. Besides Whitey’s and Cold Stone, there’s Heyn’s in Capanna [Editor: May’s Café] and Bread Garden now carries gelato.”

“World takeover. Just kidding. No plans to expand; I really value independent local businesses that work with the community to better those communities, and I was to just keep making downtown Iowa City a great place.”

“And also, no more frozen yogurt is needed in Iowa City. But if you get it, get it here, at Yotopia, Iowa City’s original frozen yogurt!”