The first half of October brings a wide variety of music to Iowa City and Cedar Rapids. Standing out are two duos and two full fledged bands: We have a pair of songwriting ladies from opposite ends of the world (although you’d never know it from their music), and a husband-and-wife pair who has been freaking crowds out across the world for years; there is also a power pop band that survived the blog hype of 2006 and another band from Omaha that wondered what it would sound like to merge punk with a Pastels album. As you can see, the variety in the first half of the month is great–let’s talk about their upcoming shows.

Pieta Brown has established quite a legacy for herself. Daughter of folk legend Greg Brown, Pieta is a gifted songwriter in her own right, playing quiet, introspective songs that delve into the depths of human emotion. When she plays live, Pieta is usually accompanied by Bo Ramsey. As of late, she has been accompanied by Australian songstress Lucie Thorne who she met on a tour of Australia. These two have worked together to create a new album of material called Fall to Rise under the project name Love Over Gold. In hearing Pieta and Thorne play together, one can hear a connection and chemistry similar to what Pieta has with Ramsey. Fans of Pieta and her style of Americana music will deeply enjoy what she and Thorne have constructed together.

The experience that is Quintron and Miss Pussycat is hard to write about because so much of it is purely visceral. There is the sight of Miss Pussycat’s puppet theatre, telling hilarious stories about rocketing to the moon with sound effects and fake blood. There is also the sight of looking at Quintron’s modded Hammond B-3 organ, replete with Cadillac bumper and license plate, and the infamous Drum Buddy (Quintron’s homemade drum machine). While the visuals are all excellent, you come for the music, and Quintron’s music is extremely physical. A melange of zydeco rhythm, R&B style, punk/garage swagger and some electronic-style beats–Quintron’s music makes you move whether you want to or not. He and Miss Pussycat come with pure intensity, and their enthusiasm translates to the audience. All of this came together to be one of the best Iowa City shows I’ve seen in my recent memory. I expect nothing less on their return.

Hailing from Omaha, Yuppies caught my attention because they are signed to Dull Tools, a label run by Andrew Savage, lead singer of Parquet Courts. Parquet Courts’ Light Up Gold has been one of my favorite albums of this past year because of its mixing of Americana elements with punk and krautrock. Yuppies take the loose lyricism and apply it to a different sonic template. Rather than merging Americana and punk, Yuppies merge jangle, college-rock (think the sound of Athens in the 1980s and C86) with punk. The result is something that is simultaneously shimmering and shambolic like The Smiths or Aztec Camera being played at high speed with a punk snarl rather than while wearing a cardigan. Given that it is a free show, it is definitely one for the curious listener to check out. 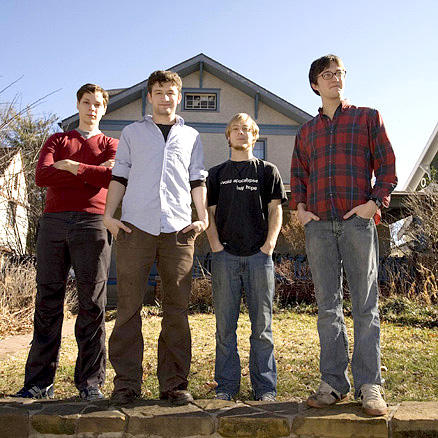 Someone Still Loves You Boris Yeltsin w/ A Great Big Pile of Leaves, The Olympics

While their name is truly one of the worst that I’ve heard in ages, the Springfield, Mo. based trio of Someone Still Loves You Boris Yeltsin (SSLYBY) is actually a very good band. Entering into the very, very crowded world of indie pop during the blog-hype phase of 2006 (anyone who remembers Clap Your Hands Say Yeah knows the period I am referring to), SSLYBY delineates themselves from the others by relentlessly touring and not falling victim to the hype. These two factors have kept them around longer than some of their contemporaries from that time. Their sound is not revolutionary; they are a power pop band through and through. The thing about power pop though is that it always sounds good, especially when it’s done well. SSLYBY can play power pop very well.

A.C. Hawley runs the Chrysanthemum Sound System on KRUI 89.7 FM. It airs each Thursday from 10 p.m. to midnight.