90 miles east of Minneapolis and situated along the Chippewa River, Eau Claire is a lush green slice of Wisconsin dairyland with a picturesque downtown. Water Street runs parallel with the Chippewa, with shops like Disc Golf 365 specializing in Frisbees and breakfast champion The Nucleus, known for its delicious eats and long waits. For drinks, The Joynt offers $2 wells, and its dusty walls are adorned in black and white photographs featuring musicians who performed on its tiny stage (now occupied by a pool table) from ’74 to ’89: Ramblin’ Jack Elliott, Duke Ellington, John Lee Hooker and Loudon Wainwright III to name a few.

Eau Claire is also home to the University of Wisconsin Eau Claire Blugolds (an unconventional color-based mascot for this quirky town of roughly 65,000 inhabitants). In the summer, though, the town is fairly calm — few students hang around to flood Water St. or float down its river. But the local population saw a spike of 22,000 or so on July 17 and 18 during the inaugural Eaux Claires music festival, which commandeered two grassy, riverside fields at the outskirts of town. Two modest men from two huge bands curated the festival: guitarist for The National Aaron Dessner and Eau Claire local legend Justin Vernon of the Grammy-award winning band Bon Iver.

“There is a very rich musical history here but it’s never exactly been put on display or talked about. We’re not trying to make it a big hooray, like, ‘Look how cool Eau Claire is!’ I just think it’s a way to signify or celebrate the attitude around here,” Vernon told Interview Magazine.

The word confluence was brought up and passed around frequently during the weekend. Festival narrator Michael Perry, with his razor-sharp baritone, mentioned the confluence of rivers in one of his two welcoming speeches, and Vernon dropped the word in between songs as his band closed out the final night. (Vernon himself is an outspoken supporter of the E.C. community art initiative the Confluence Project, which received $15 million in funding the same week as the festival.)

Mergers and collaborations were in abundance during the festival, where artists hopped on stage with one another and the No BS! Brass Band paraded hourly around the festival grounds, offering musical accompaniment whenever needed. 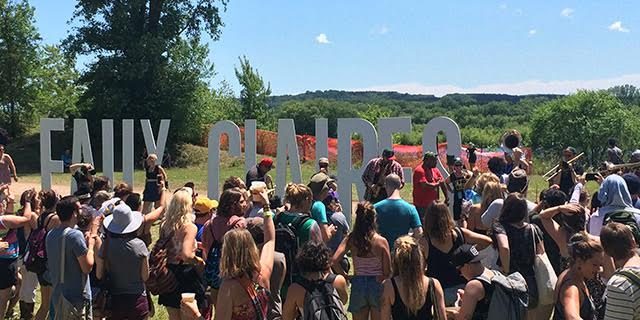 “Enough with the art shit — I just want music,” complained a young woman to her friend as they exited The Banks of St. Coix dome, one of the festival’s smaller stages. The Penny Serfs were gearing up for their early Friday afternoon set and a cycle was formed, where the curious would enter the large white golf ball-shaped dome and the overheated would slowly file out.

In this complainer’s defense, it was beginning to heat up to discouraging temperatures and the band was performing in an atypical scenario: Headphones were required to hear the vocals and they played behind a cubed screen box decorated with projected images. This particular set might have seemed better on paper rather than in practice, but the Le Claire, Iowa foursome burned through their EP Like Eating Glass without distraction nor heated protest.

Art exhibitions such as The Banks of St. Coix dome were scattered about the festival grounds, which was split into two sections. The dual main stages (Lake Eaux Lune and Flambeaux) occupied a massive field near the entrance, while the tented Dells of St. Coix stage was reachable by a short stroll through the Wisconsin forest. The gates leading into Eaux Claires were decorated in rainbow yarn that hung above patron’s heads as they had their bags checked and bracelets examined.

The premier show for both Friday and Saturday was the short Ragnar Kjartansson’s musical Forever Love. Kjartansson is an Icelandic performance artist as well as a friend of The National (it was his idea for the band to play their song “Sorrow” for six hours straight last year at the Museum of Modern Art), and he enlisted the band’s twin guitarists Bryce and Aaron Dessner for this zany show. The musical was written only three weeks before the festival, and had the Dessners pairing up with another set of identical twins in an odd love story regarding nature.

Looking around, my surrounding audience members were engaged but seemed relatively unconvinced. This was a charming method to begin each day but once more, it would appear as though much of the artistic expressions found within the festival neither clicked nor resonated with most patrons. Myself included.

Though one aspect of Eaux Claire that definitely worked was the artist collaboration that occurred during many of the weekend’s sets. The Blind Boys of Alabama appeared on stage with the Lone Bellow for their final track, and this unison was a harmonious finale to already impressive set. Vernon hopped onstage with Aero Flynn for a track, the No BS! Brass Band assisted Hiss Golden Messenger with their glorious wind orchestra arrangements, and Phil Cook summoned Indigo Girl Amy Ray by referring to her as both a hero and a friend.

The big machine of music festivals churns out fairly cut/paste copies of the same experiences, but these copious collaborations were exactly what Eaux Claires needed to truly break away from the herd. Floral head crowns were nowhere to be seen, instead replaced with multiple games of pick-up Frisbee. And not only did half of the festival lineup feature artists from the Midwest, but the harping on community and wholesomeness via spontaneous collaborations manifested exquisitely well. There was excitement in the air for who was going to come out next. Someone even scribbled: “Kanye plz be here” on a balloon that floated above the crowd.

I asked just about everyone I conversed with how Eaux Claires compared to other festivals, and the answers were generally the same: It felt more personal; as though we all belonged here.

About midway through their Friday night headlining set, The National brought out the hometown hero. “What the fuck — no shorts!” barked Matt Berninger to Justin Vernon with factious intent. Though Vernon was committing a cardinal rock ‘n’ roll sin by donning shorts on stage, his addition to the song “Slow Show” was redemptive.

By the end of the show, Berninger had polished off his white wine, and more than once, he slipped to the ground in a drunken emotional fit, only to then continue singing from the floor. This was all too fitting for the band, who chose to walk out to The Door’s “L.A. Woman” — a group infamous for the libation-influenced antics of their eccentric frontman.

There were no poor performances or bad shows during the weekend, but the highlights came during Spoon, S. Carey and Melt-Banana. Spoon singer Britt Daniel appeared on stage with a Can Ege Bamyasi t-shirt, and the Austin fivesome left no doubt in any overhearing ears that they are indeed the most underrated rock band of the modern age. Their newest member, Alex Fischel, provides guitar and keyboards, but beyond that, he’s a spastic livewire that complements the band’s unshakable urge to rock out. He bashed about the stage and smashed his tambourine in a divine fit.

Not only did S. Carey serve as one of Bon Iver’s two drummers, but he shined during his solo outing. The secret to his success: UW Eau Claire Jazz Ensemble orchestrated by Aaron Hedenstrom. S. Carey’s music is already illuminated by the shiny release of details (he is, after all, a protégé of Bon Iver), but matched with the lovely coordination of a tight ensemble, his set took on a wondrously transformative quality. After leaving the stage, the crowd gave all they could to have one more song, but Eaux Claires’ schedule ran like a tight ship and couldn’t afford to expense the deserved encore.

Japanese doom metal duo Melt-Banana scorched their set and inspired a robust mosh pit within seconds. Guitaritst Ichirou Agata shredded his Gisbon SG while singer Yasuko Onuki howled in English and simultaneously controlled the bass and percussion with a handheld device. With the click of a button she had the whole St. Croix tent thrashing.

Bon Iver hadn’t performed on stage since autumn, 2012. Vernon has expressed waning interest in the project, but the music proved too powerful to keep it locked away.
This correspondent had to sacrifice the Sufjan Stevens set in order to snag solid positioning at Vernon’s, but hell, I’m no martyr. This was worth it. From the moment Vernon appeared on stage he dazzled with a triumphant set comprised of mostly early material that he followed up with two brand-new songs.

To achieve those hauntingly beautiful and complex vocal melodies found on his debut For Emma, Forever Ago, he had the English trio The Staves provide perfect backing. Guests appeared often: The Dessner brothers assisted on “Babys,” Josh Scott from Aero Flynn played guitar and sang a verse on “Blindsided,” and the saxophone demolisher Colin Stetson intensified the deep cut “Brackett, WI.”

Vernon was talkative between songs, adding anecdotes and meaning to music that tends to present itself blankly as a way to allow listeners to insert their own significance. But I would have never guessed “Blindsided” was about trying to break into a local bank.

The final number for the evening — and festival — was the song that began it all for Bon Iver’s career and for me, personally: “Skinny Love.” Such a tender track. Vernon matched its fragileness by performing solo, center-stage with just a battered guitar.

Upon its completion, the audience quickly clapped and cheered for one more song, but I knew that it was done. Vernon did too. He looked upon the sea of 22,000 trusted fans who joined him in this endeavor, and the look on his face was that of humbled appreciation and slight bewilderment. Vernon said since he was a teenager that he’s been campaigning for his hometown of Eau Claire, praising its subtle riches and offerings. And as he turned away to fade back into the dark, I’m sure he felt that his message had been heard.