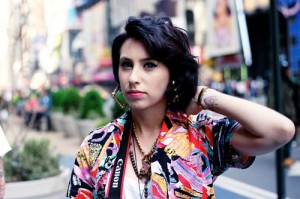 Kreayshawn is as close to the mass media’s idea of a living dream as one can get. She’s a young, white female rapper who is usually found swallowed up by a dust bowl of controversy. First, West Coast rapper The Game released a diss track called “Uncle Otis” in which he criticized her use of the “N” word in her music (he should have addressed her overuse of the word “like” while he was at it). Then, she got on Miami rapper Rick Ross’ bad side when she called him “fake” during a televised freestyle then dug an even deeper hole when she insulted his weight. As if that weren’t enough to make a few headlines, she is consistently accused of cultural appropriation and the exploitation of black culture.

Whether she’s making a joke out of such sensitive topics or not, people are listening. This a true case of a viral internet video leading to a substantial record deal, not too terribly uncommon in this digital age.

Born Natassia Zolot 22 years ago, she started her career making music videos in her hometown of San Francisco. Soon she jumped out from the behind the camera and decided to give rapping a shot. Along with friend Vanessa “V-Nasty” Reece and hype woman Jordan “Lil’ Debbie” Capozzi, whom she refers to as her sisters, Zolot performs as part of the White Girl Mob.

“My sister was already rapping at the time and, like, I thought I’d see what would happen if I tried. Once I saw that it was something people were, like, obviously interested in and wanted to hear, I was just like ‘hmm, I’ll put it out and see how it goes.’ It got a pretty good response,” she says. “I just kept doing it. I was so surprised it took off, especially by the time we put out ‘Gucci, Gucci.’ It was crazy to see the response.”

The “Gucci, Gucci” video generated nearly 3 million hits on YouTube in the first three weeks and she was quickly scooped up by Columbia Records. A nomination for a 2011 MTV Video Award for “Best New Artist” soon followed and she was able to eventually “squash the beef” with Rick Ross. It seems the sky is the limit for Zolot right now. If only she can overcome her obstacles.

“It’s definitely hard being a female and white in this industry, but I don’t let it stop me or make me feel any different. I still talk the same and do the same stuff that I was always going to do,” she says. “But even as a female, they want to turn other females against each other and being white, people always want to talk shit.”

Despite those challenges, Zolot is determined to rise above and continue her ascent to the top of the music charts. A lot of critics, however, say that she represents one of the most insidious traits of white privilege, which is the inability to even notice or appreciate it. This fact alone has plenty of people steaming. So how does she deal with all the negative backlash?

“You have to prove yourself and show them that you do know what you’re talking about. That’s all I can do. You can’t let it affect you and make you feel like you have to go out of your way to prove yourself,” she says. “All you have to do is put it out there and let people know, shit, I don’t know, you’re real.”

Her claim she grew up in “the hood” of Oakland and is used to calling her girlfriends “bitches” has also ruffled a few feathers.

“There’s such a double standard with what a man says and what a woman says. I just did an interview with a lady from NPR and she said ‘just to let you know, I don’t call my girlfriends bitches’ and I said ‘yeah, but in my generation and with people are listening to rap now, that’s just the way everyone talks,” she explains.

And as far as using the “N” word goes, that heat is starting to cool down, as well. She adamantly denies ever seriously using it in her music.

“I think people are realizing that it wasn’t me saying it. I think it’s pretty much clear that it wasn’t me and it was V-Nasty so, like, she still gets a little shit for it, but, like, she’s not using it in her music anymore,” she says. “I think she realized where she’s from, it might not have that type of effect, but when you’re music is everywhere, it’s more of a touchy subject.”

Even if you don’t like her music, Zolot has managed to avoid an overtly sexualized image, which is something that females haven’t been able to get away with since the Queen Latifah or MC Lyte era. That’s refreshing. If that’s the only thing you take away from the girl they call Kreayshawn, then that would be it. Women don’t always have to be depicted as stupid bimbos to sell a record. They don’t always have to be in 5-inch heels, a short skirt or wearing fishnets. They can be witty, funny, clever and confident in their sneakers. Now she can focus on touring, her most recent mix tape and those music videos. While internet stars may come and go faster than Lil’ Wayne stacks up charges, maybe this one will stick around for awhile.