Most proto-punk legends don’t write songs like “I’m a Little Dinosaur” or “Ice Cream Man,” but Jonathan Richman isn’t your typical rock ‘n’ roll dude. Since forming The Modern Lovers in 1970, he has made a career out of defying expectations.

Richman began as the Velvet Underground’s number one fan. In 1967, at the age of sixteen, he penned a review of their debut album for Vibrations, a music magazine from his hometown of Boston. “Three black Vox amplifiers,” he wrote, “black lyrics, black rhythms! They seemed unexcited, cool and seldom gyrated.” Years later, in his 1992 song “Velvet Underground,” Richman summed up what made this foursome so great: “Both guitars got the fuzz tone on/The drummer standing upright pounding along/A howl, a tone, a feedback whine/Biker boys meet the college kind/How in the world were they making that sound?/Velvet Underground!” 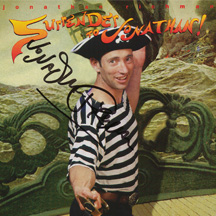 It’s fitting that an iconoclast like Jonathan Richman latched onto the Velvets, which he treated as being just as important as The Beatles at a time when virtually no one was listening to them. “Only five thousand people ever bought a Velvet Underground album,” Brian Eno famously said, “but every single one of them started a band.” One of those people was Richman, who attended over 80 (!!!) of the group’s gigs. “If the Velvet Underground had a protégé,” VU guitarist Sterling Morrison said, “it would be Jonathan Richman.” Even the typically acerbic Lou Reed enthused, “I love Jonathan Richman. There’s something about Jonathan.”

His ties to Reed’s former group run deep. In 1974, Richman recorded a duet with VU drummer Moe Tucker, whose former bandmate John Cale produced The Modern Lovers’ debut album. Richman’s signature song, “Roadrunner,” was an homage to the chugga-chugga-chugging rhythms of VU’s, “Sister Ray.” He maintained the song’s dark, cool vibe, but Richman traded its lyrics about blowjobs and shooting junk for wide-eyed tributes to AM Top 40 radio and loving his parents. Not exactly cutting edge topics for the self-styled 1960s revolutionaries, but that was the point. “The whole reason we’re doing what we’re doing is to be contrary,” he told an interviewer at the time.

A few years after “Roadrunner” was recorded, it became a hit in Britain during the punk explosion. The Sex Pistols recorded a cover, and Johnny Rotten named it his favorite song. Another popular track from the first Modern Lovers album, “Pablo Picasso,” has been covered by John Cale, Iggy Pop and David Bowie—among many others—and was featured prominently in Repo Man. (Adding to Richman’s punk rock cred, he briefly served as the Patti Smith Group’s first drummer back in 1974.)

Jonathan Richman was a punk rocker before “punk” became codified into a uniform style and attitude. Attending high school in the Boston suburbs, this Jewish outsider drew treble dials on his jeans and was generally an awkward, misunderstood kid. Richman took up the guitar and began playing at the Cambridge Common, which was loaded with longhairs. “I’m not a hippie!”—he would scream at passersby, intentionally antagonizing them—“I’m not stoned!” He wasn’t a right-winger, but Richman still loathed the cookie-cutter conformity of those “bell-bottom-wearing assholes.” He kept his hair short, his wardrobe clean-cut, and sang about wanting to be dignified and old. For an era that popularized the phrase “don’t trust anyone over thirty,” this flew in the face of counterculture orthodoxy—as did The Modern Lovers’ music.

Their simple songs rejected the bloated art-rock and bloozy ten-minute jams that dominated popular music in the late-1960s and 1970s. The Modern Lovers occasionally opened for the Grateful Dead and the J. Geils Band, whose fans largely hated them. When they opened for Tower of Power, the crowd grew increasingly irritated as Richman sang songs like “I’m Straight” (“He’s stoned, Hippie Johnny/I’m straight, and I wanna take his place!”). The Modern Lovers fled the stage after the the hippies turned violent, throwing bottles and rocks. When people wanted to beat them up, their friend from Boston, country-rock pioneer Gram Parsons, came to the rescue backstage.

Despite these negative responses, The Modern Lovers developed a large regional following and eventually signed to Warner Brothers Records. The future looked bright for the group until it took up residency as a house band at a Bermuda resort. Richman fell hard for the joyful sounds of the island’s music scene, which inspired him to develop a more whimsical songwriting style. He also wanted to wash his hands of the music industry’s sleaze, so he broke up The Modern Lovers in 1974.

Richman’s new material was a mixture of simple rock ‘n’ roll styles, kid’s songs and folk music from China, Egypt, Ecuador and the Caribbean. He began performing shows for children at hospitals and elementary schools, and then brought that same material to adult audiences. After “Roadrunner” became a hit in Europe, concertgoers who expected to hear the dark, harsh sounds of the John Cale-produced Modern Lovers record were confronted with Richman’s new songs. Some reacted with tears of joy while others loudly voiced their displeasure. After all, what could be more punk rock than singing “Hey There Little Insect” to a room full of Sex Pistols fans?

When not dropping knowledge on his students’ asses this semester, Kembrew McLeod will be warping minds with his weekly KRUI radio show, Instru-Mental Madness, on Wednesday mornings from 10 a.m. – noon. Some of the quotes in this column originally appeared in Tim Mitchell’s biography, There’s Something About Jonathan.

For my fellow parents who want to strangle Raffi—not enough to kill him, but at least to crush his vocal cords beyond repair, I offer this free download: Jonathan Richman’s Greatest Songs for Kids (of All Ages)