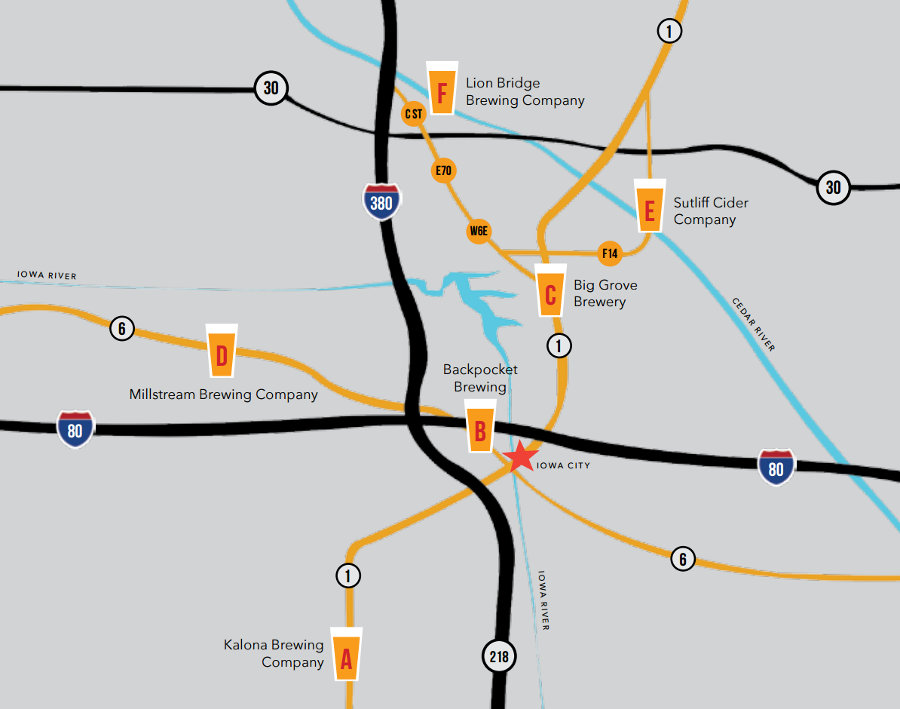 Between RAGBRAI, Millstream’s Tour de Brew and the Culinary Ride, food and beer-soaked bike rides are a guilty pleasure in our area, but a tradition nonetheless. Ride safely!

Spacious, simple and modern, with a seemingly mile-long tap line to boot, the Kalona Brewing Company in downtown Kalona provides a pleasant and relaxing atmosphere to sit back and enjoy a good brew. The bar and eating area feature a few couches, a fireplace and a view of the stainless steel tanks in the brewing area. An outdoor seating area is open during warmer weather. Kalona strives to serve locally sourced meat and produce, and the mountain of beer-battered onion rings served with a special house sauce is an excellent appetizer.

Sucha Half Wit, a blend of Kalona’s IPA and Belgian-style wheat that is only available at the brewery.

Instead of being its own separate space, the dining room at Backpocket Brewing is part of the brewery, so customers feel included in the process of making the beer. The brewery serves signature pizzas and flatbreads baked in a brick oven. The beer garden out front features a grill, fire pit and yard games, and, during the summer, hosts outdoor movie screenings at night.

Wooden Nickel, a tasty lager influenced by both German and Scottish brewing traditions.

Fittingly homey and woodsy, a little like a cabin in the woods, Big Grove is an ideal pit stop on the way to and from Lake Macbride. Refuel with a pound of Parmesan fries, burgers served on bread baked in-house or homemade pizzas. Fourteen tap lines feature a rotation of guest and Big Grove brews. Thirst is required during happy hour (3–6 p.m.), which features a two-for-one special, where two beers are served at the same time.

Arms Race Pale Ale, an invigorating beer made with Citra hops and featuring lots of citrus and tropical fruit aromas and flavors.

Established in 1985, Millstream is Iowa’s oldest microbrewery. With live music and fun events scheduled throughout the year, it is the place to be in the Amana Colonies. Grab a beer in the brewery’s taproom, which not only serves Millstream’s award-winning beers but also sells six-packs and growlers to take home. Relax with a pint of Iowa Pale Ale or John’s Generations White Ale outside on their patio, which features communal tables, hanging plants and vine-covered pergolas. An indoor seating area, with a view of the brewing tanks, is also available.

Back Road Stout, a robust, opaque, black-colored stout that won a gold medal at the 2011 Great American Beer Festival.

Just five miles north of the historic Sutliff Bridge over the Cedar River is the Sutliff Cider Company, which presses apples, ferments the juice and bottles the finished cider in two historic barns.

The taproom—located on the ground floor of a barn built in the late 19th century—and outdoor seating area are a popular destination for those out on a scenic drive or long bike ride. The taproom is only open seasonally on Sundays from 11 a.m.–6 p.m. The 2015 season opens on April 26 and ends Oct. 25.

Located in the former Fritz’s Food Market in Cedar Rapids’ Czech Village, Lion Bridge brews world-class beers for the Corridor. The taproom offers eight to 12 Lion Bridge beers alongside three to five guest taps. Beer-centric snacks, appetizers and sandwiches, all made with locally sourced ingredients, are available from the kitchen.