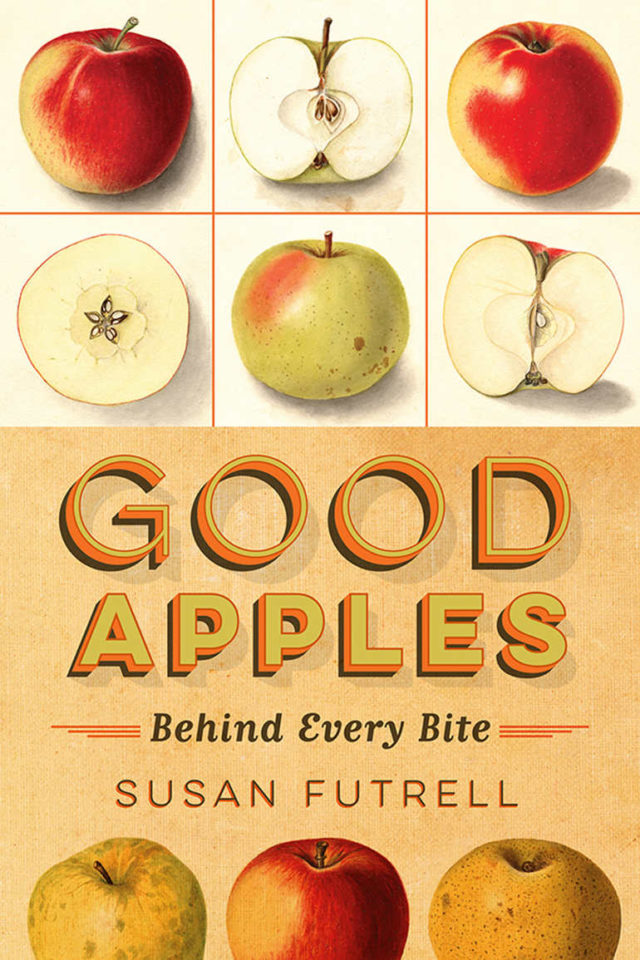 Author and Iowa City resident Susan Futrell starts out her book Good Apples: Behind Every Bite with the auction of the oldest commercial apple orchard in Iowa: an orchard outside Fort Madison that had been in the same family for five generations, but now faced an uncertain future dependent upon the winning bidder. It’s a fitting place to start a book about the long history of apples in the United States and the uncertain future the apple industry faces in a global economy.

“I’ve loved apples since I was a kid, as many of us do, but it was really working with apple growers directly and seeing their passion and dedication that inspired me to want to write a book that would tell a little bit of the backstory of what’s involved,” Futrell said.

Futrell, who has spent years in the natural grocery industry, uses her background in the wholesale and marketing side of the food industry, as well as her interactions with apple growers, to give readers a peek into the industry.

The book discusses some of the curious history and biological traits of apples. Despite phrases like “as American as apple pie,” apples are not native to North America. They were brought over by European settlers. Apples are also incredibly diverse, in part because they are heterozygous — planting a seed from one apple is not going to give you a tree with identical fruit. You have to take cuttings from the tree itself to produce another tree with similar apples.

“That just kind of stunned me when I realized that there are thousands of new varieties happening all the time and only some of them are good enough or useful enough that people have kept them going all these years,” Futrell said. “And the only way they’ve kept them going is by cuttings and grafting, which means that every time you eat a Red Delicious or a Baldwin, the genetic origins of it all trace back to that first Delicious or Baldwin tree.”

The book then takes readers through the many challenges facing the industry: consolidation into ever larger farms, with small farms struggling to keep their footing; climate change; pests and diseases that can wipe out an orchard; ever-changing practices for treating those pests and disease, with increasing consumer backlash for chemical-based solutions; the loss of older apple varieties in favor of new, popular ones; the challenges of low-wage farm workers who are frequently entangled in a complex immigration system; and the negative impacts of budget cuts to research that the industry has long relied on.

One particular budget cut that hit home for Futrell was the Iowa Legislature’s defunding of the Leopold Center for Sustainable Agriculture this year — then-Gov. Terry Branstad vetoed an effort to shutter the center entirely but approved cutting all state funds. The center has supported research into sustainable agriculture practices since 1987.

Futrell said the cuts, coming after 30 years of research supporting community food and farming, were heartbreaking.

Still, Futrell said she’s hopeful about the resurgence of interest in heirloom varieties and local food. She said there are a number of ways people can help support smaller farms, local producers and the goal of farming sustainably.

“Shop at the farmers’ market, get to know local farms, support local growers, shop at grocery stores that buy from local growers and ask for their products in the grocery stores. All of those are ways to help sustain farms that are trying to make it,” she said, although she added that those actions alone, without addressing broader issues like public research funding and immigration reform, will not be enough to bolster sustainable farming.

Futrell says she is a fan of organic farming, but she said the label also invites easy categorization that doesn’t reflect the complexity of farming. She said she encourages eaters to “be a little less doctrinaire about their own food choices.”

“Maybe a local grower doesn’t do everything the way that you wish they did — they are not certified organic, or the variety that’s in season isn’t the one that you are the most used to,” she said. “Try to understand a little more about the growing practices they are using, and why, and think of yourself as part of that whole system instead of as just the end consumer of it.”

“I know that doesn’t sound like much, but I really believe that the way we think about ourselves in relationship to our food is ultimately part of what shapes the kinds of foods and farms that we have in our communities.”

She said people can also take action by supporting local organizations like the Leopold Center and Practical Farmers of Iowa, which invites non-farmer members.

Good Apples is out on bookshelves now through the University of Iowa Press. Grab an apple, or maybe some local cider, and delve into the world of apple farmers and the combination of hard work, passion and luck that brings this essential fall fruit to farmers’ markets and produce bins each year.

Lauren Shotwell is very ready for fall, the season of apples, changing leaves and cooler weather. This article was originally published in Little Village issue 229.