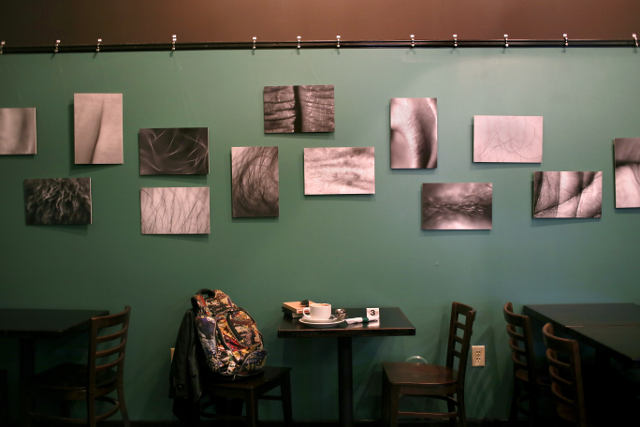 Steve Pernetti is my friend. We met in 2010 when he bought Fair Grounds, the Iowa City vegan/vegetarian bakery and café whose food I loved but manager I couldn’t stand. Since then, Fair Grounds has changed. They serve meat; the dystopian note-scape of passive aggressive Post-Its judgmentally fluttering on everything vanished with their last owner. And Steve has become more and more interested in the arts and using Fair Grounds as a venue to promote them, turning his back room into a gallery space and his front into a performance one. Steve loves Iowa City—he loves people and he loves art. And since we talk about art sometimes when I come in, I asked if he’d sit down with me and talk about where, as a local business owner, it fits into Fair Grounds and the greater Iowa City community.

As we sit on couches in the back, an artist and her sister hang work. Emilee McNeal, the artist behind the current exhibition “Swimming the Monochromatic Sea,” is hanging her black and white photography. They’re small and varied—darkroom photos and one photogram. A quietly energetic former student, she tells me, “I think there are places to show art if you search hard, but this is the best I’ve seen. Especially if you’re just starting out.”

“Emilee was the roommate of one of my staff members who’s now working for AmeriCorps. She came in a couple months ago to see if she could do a show in the back,” Steve says. “A lot of this art comes to us without a lot of proactive work. Strangely enough, I’ve contacted the university to see if there are artists who’d like to come show their work here. They wanted me to put a proposal together and go through a process where I justify why this would be a good space. It seemed a little more structured than I wanted to deal with. We’re doing this mostly to support the community. 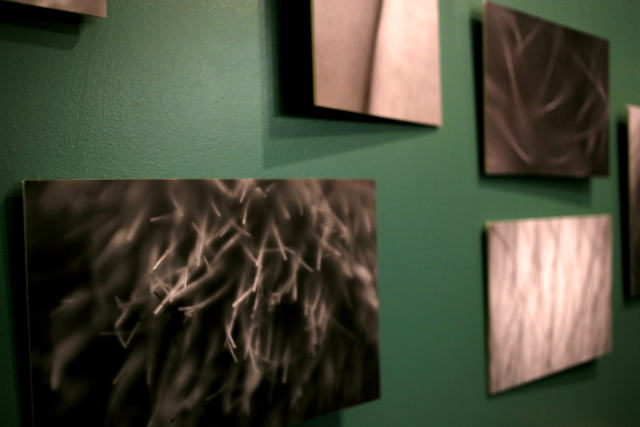 “Walls should never be bare,” Steve continues, adjusting his trademark tan cap and glasses. “We took a look at [Emilee’s] photography and liked it, and we liked the idea that we could say, ‘yeah, we’re doing abstract nudes in the back of Fair Grounds,’ which always gets peoples’ attention. It’s actually more macro work on skin but still sounds really cool. I’ve developed a working relationship with (local artist) Julia Schaefer (local artist and former owner of The Tool Box), who has done a number of shows.

“We like art that’s a little different, provokes thought and doesn’t look like it should be sitting in the average corporate café.”

While Steve’s work at Fair Grounds involves managing the business itself in myriad ways, he’s someone who clearly thinks a lot about what’s shown and the effect it has on viewers–just like any gallery owner might. I ask him about the differences between running a café with a gallery and a more “standard” gallery. He explains:

“We think about the fact that this is a public venue. If it were strictly a gallery we might have a little bit more liberty with what we’d show here, but we have families that come in on Saturday mornings from all walks of life. We have to be a little more sensitive of our clientele and what they expect to have around them. It doesn’t just have to do with whether there’s nudity involved—we’ve had nude work on the walls—but there’s also a comfort level. Some art is sufficiently thought-provoking, but some might make someone uncomfortable who is coming in for breakfast or getting a beer after work.

“I can give you an example: I was approached about a month ago to put on a show called ‘Nuclear Neighborhoods.’ It’s in concert with the university. The curator sent me a proposal and it had a lot of elements related to Hiroshima and nuclear warfare. It made some powerful statements, but the problem I had with it was that when people come to a laid-back, bohemian café where they might want to relax and get away from the challenges of modern life, I didn’t know how well it would fit. I’ve turned down other things simply because they were too pedestrian, too boring. Things that didn’t really say anything, things that were more craft than art. 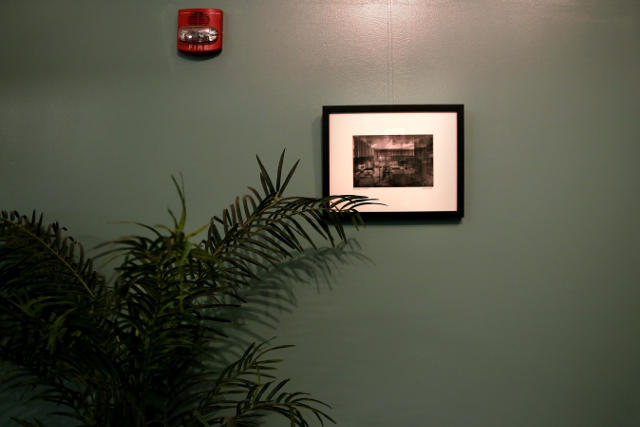 “We have an unstructured approach,” he laughs. “People hear about us, or they hear about us from Julia and the network of artists she’s set up, or through the arts and literature network we already have set up here, or through friends of customers.”

This “unstructured approach” is the soul of Fair Grounds, an upscale DIY gallery; a vehicle for art conductors ready to take their passions on any number of roads.

“Everyone we’ve shown here is a local artist. This is the same thing we do with poetry readings, writing workshops, art, music … we’ve never done anything three dimensional or run theater performances here. Interesting stuff we’ve never done! And we’d like to show independent films. I’d love to put in a projector and show indie movies on Wednesdays, or something like that. People reach out to us to run events and we want to reach back and help them do it!

“It’s a two-way street. We run community events, and in turn, the local community supports Fair Grounds. We don’t charge our artists anything to run shows, and we don’t take a cut from whatever they sell. [The art] makes the place look better and it brings people in … we’ll find other ways to make money, not off the backs of artists, many of whom are just starting out.

“I hope we’re able to segue into a calendar where we run new shows by local artists. I don’t want to have any gaps, and I know there are people out there who want to run shows. I know there are a lot of artists here and a finite amount of places to show their art. I hope everyone who has a space makes that space available to the community so artists can show their art. There are a lot of walls in Iowa City.”