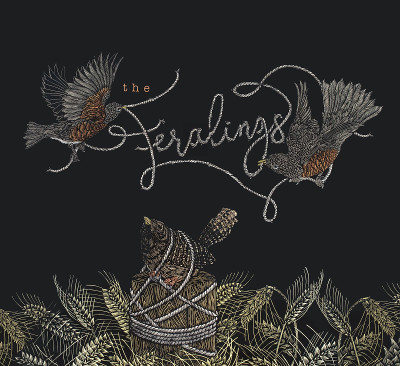 Iowa City folkies the Feralings released their highly anticipated debut EP last October, a collection of six gorgeous tracks that’s stylistically scattered but so tightly woven and so cleanly mixed and mastered (I hope we hear a lot more from Ben Schmidt and Rescued Rabbit Studio) that the diversity has the feel of a carefully curated sampler. Its songs range from a decade old to those likely written for the EP, with duties split between banjo player Nicole Upchurch, who wrote four, and upright bassist Patrick Bloom, who penned the other two (mandolin player Benj Upchurch rounds out the core band, with assists here from Stacy Webster, Jakob Breitbach and stalwart David Zollo).

“Maybe Maybelline,” one of Bloom’s offerings, is exquisite. If I’m being honest, I could write this whole review about that song (although that would do the rest of the record a disservice). The trick of it is a delightful interweaving of lilting instruments in conversation and lyrics that leave a pleasant ache: “Maybelline, Maybelline, my heart’s cauterized / From a lifetime of lies, a thousand small things / Let’s go for a ride, pretend we’re in love / Maybe Maybelline.”

When I was little, I used to listen to my aunt and her friends play old folk songs around campfires, and I would dance — back before I decided to hate dancing, back when my body used to flit instead of lumber. I can hear that same movement in the harmonies on this song, and as a singer myself, it’s revelatory: I can dance with my voice. (Or, at least, Nicole Upchurch can.) To claim this song is perfect would be a grave abuse of the power of this platform — but it makes me smile and it makes me cry, every time, and that’s all I would ever ask of a perfect song.

“I Shall Bring You Flowers (Sun God),” Bloom’s other songwriting contribution, is tinged with the Laurel Canyon sound that’s made its way back into vogue, helped along in that by Nicole Upchurch’s ever-versatile vocals. On her own songs, her voice becomes another instrument, with slides like a bow across strings and melodies that sound like she’s written a fiddle part. Bloom’s harmonies, in contrast, are a study in layering. “Lila” exemplifies both.

All told, this record is lovely. It’s a joy to visit with.

This article was originally published in Little Village issue 258.