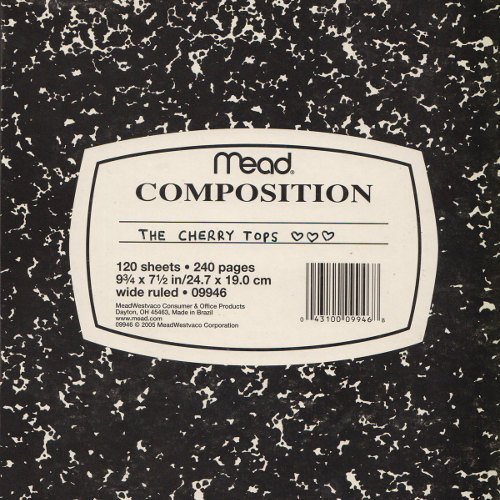 The Cherry Tops, on their debut disc, <3 <3 <3, which dropped last year, have a delightfully unapologetic early ’60s vibe, fast and funny and full of joy. The seasalt lyrics (antagonistic in the sweetest way possible) are delightfully disarming; “I like my music loud/I like my hair a little long./Is that so wrong?” is the conceit of album opener “Eighty.” No one could accuse this band of being highbrow, but why would they want to be, when there’s a world of froth from half a century ago that’s been lying dormant for too long?

Singer Kyle Anthony is the glue that connects this ’60s throwback to the modern era. With echoes of Spike Slawson’s Me First and the Gimme Gimme’s tonality, Anthony nevertheless manages absolute sincerity. He’s got sass in his voice, no doubt — but he’s never tongue-in-cheek. The album closer, a cover of the tune “Let’s Twist Again” (a hit for Chuck Berry in 1961), is delivered with loving reverence.

The fast-paced album’s strongest moments are track four, “Game Show Geek,” and track five, “What’s Up.” “Game Show Geek,” one of the longer tracks (coming in at a whole 1:24) dances around with clever lyrics and references (“I’ll be yours tonight/if the price is right”) and offers some of the more interesting of the deliberately simple musical settings. “What’s Up” (at 1:48, the longest offering) is timeless. It could just as easily have been written in 1960 as in 2017, and it’s utterly serious and sweet.

This is a cotton candy record in flavor and weight, but it’s not the least bit saccharine. It’s cotton candy you can keep enjoying for as long as you’d like, without a hint of a stomach ache. The musicians are having pure fun and bringing the listener along with them. “I like to stay up late/I like to make up stupid songs,” sings Anthony on “Eighty.” “Is that so wrong?”