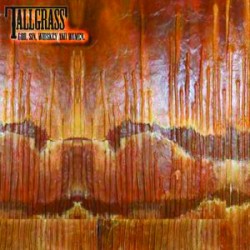 I hate country music. Sort of. If you drive around Iowa with just FM radio in your car, you hear a lot of what they call “country music” and that music is to the real music of the country folk of the United States what the Matterhorn in Disneyland is to Switzerland. But if all country had the independent-minded freshness of Tallgrass, I could be persuaded to reconsider my prejudice against it.

What sets Tallgrass apart is hard to put my finger on. They certainly have some of the blues influence picked up from bands like Allman Brothers, but where that band indulges in western-shirt-ripping grandiosity, Tallgrass is more subtle, sly and lateral, more likely to sneak up on you than hit you over the head with wailing guitars.

They’re also a band with a peculiarly funky brand of country-folk. The liquid, swinging fluency of Adam Morford’s drumming drives every song without ever dominating the mix. He inverts the traditional balance of the trap set, pounding out patterns mostly on floor toms, using the kick, snare and cymbals for accents and sparse fills. Austin Morford and Matt Skinner’s guitars percolate and mutter in tight counterpoint to the drums.

Tallgrass’ songs have some country blues moan to them, but hints of jazz chords sneak in to take the songs in unexpected directions. They might have a  three-chord skeleton as simple and direct as a Waylon Jennings song, but there’s always some satisfying twists and turns that keep things interesting. “Man Who Forgets It All” stands out taking a traditional harmonica and claw-hammer banjo into Bela Fleck territory without ever getting noodly or annoyingly “progressive.”

I still hate country music but I think God, Sin, Whiskey and Women points out what’s wrong with it: a lack of imagination. They show what can happen if good musicians take the tradition as a starting point instead of an end. If commercial country barrels straight down the Interstate, Tallgrass is out cruising the gravelies, fishtailing a little on the curves but always keeping it between the ditches.