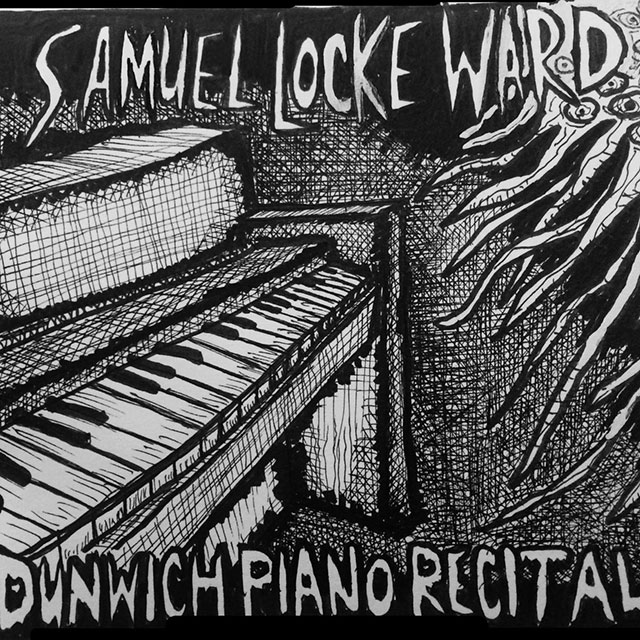 Samuel Locke Ward hasn’t had an album reviewed in Little Village in over a year. Given that he released 12 full-length albums in 2014, it may be reviewer exhaustion to blame. But if we’re going to end this critical shutout, Dunwich Piano Recital is a great place to start.

Central to this album is the acoustic piano. Sam told me that he “was going to take a break from making music,” but that he would sit down at the piano “to blow off steam,” and invent songs extemporaneously. “I kept a four track on top of the piano and recorded them, because if I walked away I’d instantly forget them.” Lyric and melody were added after the fact. “I shouldn’t have told you they’re not real songs, you won’t review it.”
These songs are real, though they can feel a little hallucinatory. “Just Don’t” is a hazy, creepy bummer; The piano chords signal drama and majesty, but the ragged tone of his voice sounds as though he’s ready to collapse. He sings “I’m perfect today, I’m a sight for short eyes, I’m in love with myself, because I’m such a prize,” dripping with irony and dread.

Songs like “Fall In Line” and “Goons” live in a warm, vague bed of piano chords. Locke Ward uses an old upright piano in need of a tuning and repair, recorded with a cheap microphone to cassette tape, but the low fidelity recording just enhances the atmosphere. “Fall In Line” plays distorted voice against falsetto cooing, and reminds one of Radiohead. “Goons” has a Beach Boys vibe, with tambourine recalling “God Only Knows,” but tells the story of a botched robbery, from the point of view of a “goon” following an obviously incompetent boss.

There a certain willful crudeness to Dunwich Piano Recital. Where Thom Yorke uses his choir-boy voice to take some of the venom out of his more mean-spirited lyrics, Locke Ward uses a nasal snarl to underline the lyrics’ desolation and hopelessness. The most effective songs, like “Bad Christians,” are sung with no trace of ironic distance, and are stronger for for it’s absence. But like the H.P. Lovecraft story “The Dunwich Horror,” after which it is named, the pervasive gloom and dread is transmuted into something delicious and absorbing.