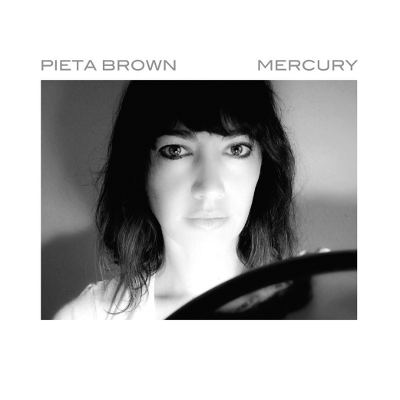 The monochrome photo of Pieta Brown on the cover of her album Mercury (out Sept. 27 on Red House Records) carries a certain “Mona Lisa” inscrutability. The unusual lighting from beneath nearly washes out her face drawing you almost self-consciously to her gaze. While I usually don’t expect her album covers to directly represent the album, the cover to Mercury elicited a pause before hitting ‘play.’

Mercury is unique in the periodic table of elements in that it is the only metal which is liquid in the Earth’s atmospheric conditions. As a literary convention, Pieta uses it with great effect in the title track. When she sings, “A mercury sky, a mercury sea / A mercury love inside of me” she’s revealing that which changes like quicksilver in her. So, too, like the contents of a broken thermometer on the floor rolling and pooling, the mood of Mercury changes and flows.

Pieta’s sound is one that evolves slowly over time, and Mercury doesn’t indicate any dramatic departure from her previous efforts. If anything, Mercury is a continuation of the distinctive folk-blues style established on her first Red House Records album, 2010’s One and All. She continues, first and foremost, as an observer of the human condition. Never a literal storyteller, she delivers perspective and mood with the details left to be filled in by the listener’s own experience. I often find myself searching for clues to decode the songs, which change at each listen.

As with the photograph on the cover of Mercury, we may ponder what Pieta is thinking, but the answer lies in our own listening and the changes that brings.

Pieta Brown will be performing an album release show on October 8 at the Englert in Iowa City as part of it’s 99th Anniversary Celebration.