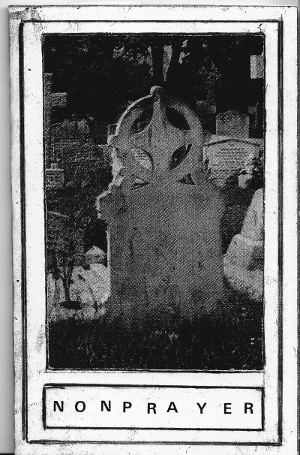 Non Prayer is a local “work in progress” band led by guitarist/singer Joe Heuermann. Usually moonlighting in the darkwave, synthesizer-led Goldendust with keyboardist Justin Thye, Heuermann takes a trip down fuzzy-reverb lane on this four-song jam. Recorded to tape in two nights by local, obscure record hoarder Mickey Shaw, the songs have an early SY sludge to them, but with Andy Buch’s live drums sounding more like a blown-out drum machine than a full kit. Sometimes you’ll get Heuermann’s shimmery guitar melodies, and sometimes you’ll get that little Turkish Delight of high-end shriek and feedback. It’s truly boss. There’s something about guys who really dig Spaceman 3 but don’t have a druggie attitude. It’s refreshing to say the least.

With a gravestone on the cover of the cassette and a dapper Dan in a tuxedo on the insert, you would expect a pretty grim headtrip from these guys. But, apparently, all the songs are love songs, and they’re also all sung in an almost baritone lull that’s pretty captivating. Heuermann’s songwriting is spot-on, too.

Live, Non Prayer has a huge sound for a duo without the usual gimmicks. With a big stack of speakers and a serious heavy-hitter on drums, you’d expect a full-on rock sound. But there’s a cool, hypnotic smoothness to it. It’s like an old-school gothic baby’s butt smoothness. And with Joe hunched over his microphone (do they even make mic stands tall enough for him?) it all can give off a weird, Murnau vibration.

Non Prayer is appearing at the Wherehouse on Feb. 28 with Tyvek. Night-People Records is also re-issuing the Goldendust cassette in early February, so don’t miss that. And while Non Prayer is recording new songs for a long play on Night-People, entertain yourself with this self-released tape…if you can find it.