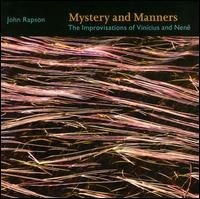 Questions of authenticity and the creative process have long been pressed on fans of modern music, especially electronic music. File sharing and digital manipulation change the collaborative process and force listeners to ask how important human playing, human authorship and human interaction are to creating what we call music. Is collaboration collaborative when it is written and performed without the musicians ever being together in the same space, or even the same country? Is a composition a composition if the composer does not actually write any of the music, but simply organizes it and fills in the gaps?

UI Jazz Professor and composer John Rapson has been suggesting these sorts of questions over much of his career. On Mystery and Manners, Brazilian musicians Vinicius Dorin and Realcino Lima (or Nene) compose–sometimes independently and sometimes as a trio with drummer Rafael dos Santos–free improvisations, which are then sent to Rapson to be transcribed, augmented by Rapson’s own playing, and re-arranged into the final compositions found on the release. The process is time consuming, perhaps infinite, as it retains a quality of being perpetually unfinished.

Rapson has worked this way in the past with such luminaries as Anthony Braxton and Billy Higgins and is sometimes associated with Ornette Coleman. But the music on Mystery and Manners is in many ways far more traditional than Coleman’s and experimenters of his ilk. The melodic structures are easy to grasp and the arrangements seem much more like songs than disaggregated tones or disembodied solos. Much of this is accomplished through the focus on detailed percussion, which his collaborative lineup emphasizes, and through a density and internal structure which would likely impress Hank Schoklee.

The sounds and improvisations are intricately layered and densely textured, flowing together seamlessly. This aspect of Mystery and Manners might remind us of Eric Dolphy in his best improvisational work and in fact many passages from Rapson’s album seem as though they could fit comfortably on Out to Lunch. But his technique is more rigorous. While Dolphy always seemed to catch himself at the outer limits of improvisation and return the song inwards, Rapson builds from the inside out, offering an internal structure that much of improvisational jazz lacks. The results for the listener are rewarding and, while the process may be contemporary, the sound will be somehow familiar.