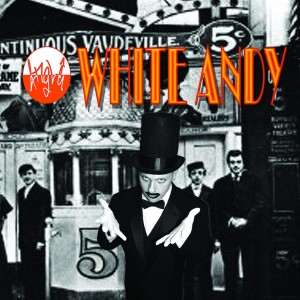 Angle and Coolzey are Iowa hip-hop veterans, but to my knowledge White Andy is their first collaboration. They don’t pussyfoot around; “White Andy” is a character Angle (Jarid Catrenich) uses to take on the issue of hip hop and race in possibly the most ridiculous, over-the-top manner, including appearing in White Face on the cover. “Two white dudes making music for people of all colors,” drawls Coolzey at the end of “Blazee.”

I’ve used the word ‘cartoonish’ more than once in reviewing past releases by these guys, and with White Andy they take the broad humor further than ever before. Which is how White Andy succeeds—only too much is enough. Angle mashes up horror movie references and childhood memories in “Abysses,” and “Chinee” starts with references to Public Enemy and Tupac before taking on his implacable, eternal foe: weak MCs. “Farns,” the posse track, featuring no less than seven guest MCs including Iowa veteran mic handlers Felix Thunder and Tremayne.

As much as I appreciate Angle’s diction, flow and writing, this CD represents a leap forward in production for Coolzey. From a beat skeleton banged out on a sampling drum machine, he adds texture with tasty backing vocals, piano, organ and sound effects. “Hiyah” is the best Coolzey beat I’ve heard so far, and he has always had a great ear for production. Angle seems to be really inspired by the music he has to work with: On “Abysses” he finds the groove in a shambling oddball beat layered with horror movie strings. The one non-Coolzey beat, “Rocket” by Tinkerbot, has a perfect Prince Paul meets Schoolhouse Rock feel.

“A little wack-a-doodle and I like it that way,” Angle intones on “Hiyah” and that’s actually a good review for this seven-track EP. Silly, a little corny and unapologetic about being exactly who they are: a couple of white guys having fun and going nuts.ls