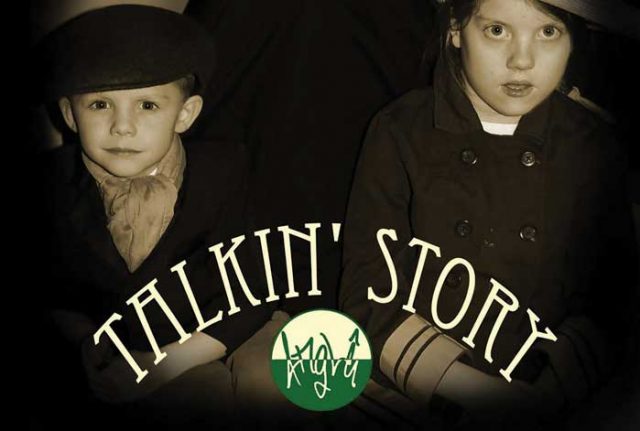 Longtime Iowa hip hop artist Angle (aka Jarid Catrenich) is at it again. Following on the heels of last year’s Definitive Bedtime Stories is his newest effort, Talkin’ Story. Angle is a storyteller, and uses his beats as punctuation for gritty tales that need to be heard. Unlike the happier vibes of Definitive Bedtime Stories, Talkin’ Story has taken a dark turn. There’s a lot of emotion in this record — a lot. You have an artist clearly working through some stuff. But for someone who has been in the game more than 15 years, it’s not unusual to make a darker record that touches on themes of breakups, death, defining oneself as an artist and love.

This record opens with a set of songs that explain who he is (“OMG,” “Every Night”) and he doesn’t make excuses or pander to anyone. Angle is a man who wants to tell you the dark shit—about how breakups make you obsessive, about your art or your paramour. “Exposed Nerve,” the third track on the album, takes us down the path of the obsessive ex-lover, and then winds around to a comparison between love and art. With hard beats, and harder words, the rawness is something you instantly feel. And it doesn’t let go. Every track is a challenge, and one you should be willing to take.

The album is heavy lyrically. A trio of songs on this album (“Exposed Nerve,” “Until it’s Gone,” “Death Text”) tell the story of slightly obsessive love after a breakup. She moves on with a dangerous man, and, by the third song in the trio, she dies at the hand of the new lover. Lyrically, they are some of the best songs on the album, and, while they are about a girl, they’re also about his relationship to his art.

There are some moments of real greatness in both lyrics and production, with support from some longtime collaborators like Felix Thunder and Kurt Loving. Myka 9 appears on “Hazy on a Clear Day,” a soulful number. Aeon Grey, The Dust Collectors and Samuel Jonathan Johnson, Jr. provide production. I love the grit of this album, its lack of timidity and how real it is. It would be easy to compare him to other Midwest artists like Atmosphere and Brother Ali, or even the angry energy of Sage Francis. But Angle is his own man, and this record shows us who he is: honest, raw and genuine.

Exactly what you’d expect from a Midwesterner.