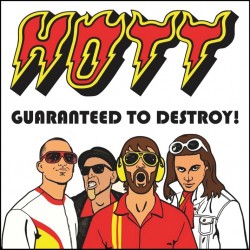 Few bands have made such an immediate splash as Hott has in the Iowa City music scene. Partly it came from the participation of longtime Iowa City musicians Action Man (Ed Nehring) and Big Daddy (Kylie Buddin). Those guys were charter members of the punk/hardcore scene that exploded in IC during the 1980s, and have participated in countless bands since. Hott is a high concept operation, incorporating costumes, outlandish personas and over the top histrionics that recall professional wrestling, Devo, Cheap Trick and Andy Kaufman

On top of that, they have a ferocious ensemble sound. With slashing guitar, machine gun drumming and Action Man Nehring’s go-for-broke declamatory singing, Hott has a sound that anyone who likes loud music can’t resist. Combining the chops and long experience of Nehring and Buddin with the 20-something energy of Hott Stixx and JUic’ed gives the band irresistible energy; when they jump to double-time (as they do on “Soaring With The King”) it feels like you’re caught in an updraft.

On CD, no one can see your sharp racing-striped coveralls and banana-yellow ear protectors, so Action Man’s singing is sweeter and more melodic than it is during their live shows, where more shouting and yelping is required to match the volume of the band. But it’s a good contrast with the live show, and plays up the sweet poppiness that is pushed to the background in a loud club.

What makes Hott more than a joke band is the utter conviction with which they imbue their cartoonish characters; they pretend hard enough that if you give them half a chance, you’ll be right there with them in a world that’s louder, brighter and more colorful than the one we have to inhabit day to day. Action Man sings “I’ll give you everything, on eagle’s wings, come soaring with the King!” and if you aren’t convinced, you must be half dead.