The masterminds behind Welcome to Night Vale will hold a reading and discussion of their new novel, It Devours!, on Saturday at the Iowa City Public Library.

Night Vale is a vividly imagined horror/sci-fi world first introduced in the cult podcast Welcome to Night Vale in 2012, and now found in live shows and two novels; the creators also produce other projects under Night Vale Presents. The podcast and shows are presented in the form of a radio broadcast hosted by the charismatic Cecil Palmer (Cecil Baldwin). A typical show moves swiftly from dark philosophical musings — “Your existence is not impossible. But it’s also not very likely.” — to coverage of the mind-controlling glow cloud that’s descended over the desert town, to an interview with a local ghost, monster or Cecil’s handsome partner Carlos the Scientist (Dylan Marron).

Fink and Cranor’s novels leave Night Vale Community Radio largely behind, freeing them up to pursue new characters and more dramatic, extended plot lines. It Devours!, released Tuesday by Harper Collins, focuses on Nilanjana Sikdar, a colleague of Carlos and visitor to Night Vale. While searching for scientific explanations to supernatural happenings, she comes in conflict with the Joyous Congregation of the Smiling God, a local religion whose followers believe salvation comes from being devoured by a mystical being. Nilanjana develops a relationship with one of the faithful, Darryl, and the two try to reach an understanding before Night Vale residents meet a terrible fate.

We spoke to Fink on Wednesday about the new novel, his and Cranor’s creative process and the intersection of religion and science in both Night Vale and the real (and in some ways, weirder) world.

The new book just came out yesterday. How do you feel?

I feel really good! We just had our launch event last night in New York City. Tonight we’re in Nashville doing an event.

The world of Night Vale is full of the creepy, corrupt and uncanny. How do you continue to make it a place audiences are comfortable returning to?

I think you fill it with people that feel real … While Night Vale is especially weird, the world everywhere is weird, so it allows us to play a bit with the fact that while we don’t have aliens and government spy cameras covering every inch of our house, there’s still a lot of very strange things in our life that we just kind of don’t think about because we don’t think of our world as strange.

It Devours! holds religious fanatics from the Night Vale-verse next to a scientist from the Indiana. This would be an obvious source of conflict, but I know you wanted to make a story that did more than pit God against science. How did you go about this?

We tried to discuss religion the way we see it. I was raised by a math professor. She gave me Richard Feynman books growing up, we went to astronomy conventions, but we were also religiously Jewish: We went to synagogue at least once a week; we had Shabbat dinners at home. My father was a musician at the synagogue.

For me, the narrative that religion and science are in conflict is a very simplified narrative and one that I think buys into the most extremist views on both sides. I think there are lots of people who very easily balance religion and science in their lives. They are two ways of approaching the human experience, and they both have very useful things to bring to human lives. I think that’s what we wanted to approach: What do each of these modes of thought do really well, and what do they fail at? 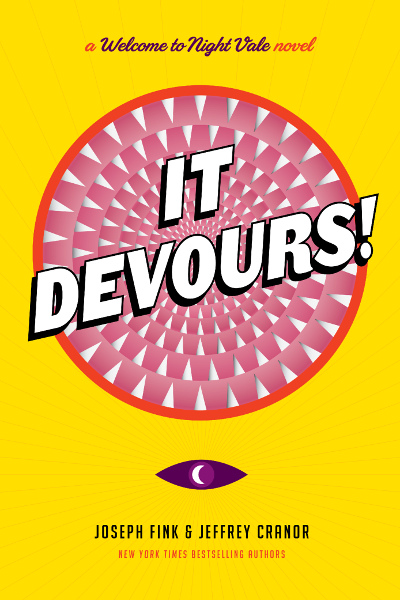 Did you draw inspiration for the Joyous Congregation of the Smiling God from any cult or religion in particular?

The theology of it, no; that’s just kind of wholesale Night Vale. There’s bits and pieces — some of the music in it is a bit from my years in synagogue; there’s an accordion player, and we often had an accordion at synagogue. There’s also elements of it that are intentionally based on the aesthetic of southern California, like the storefront churches [which are] usually pretty unadorned spaces with often a projection screen just showing PowerPoint slides of song lyrics. There’s something about religion happening in a space that doesn’t look sacred at all that is interesting to me.

Was there a particular ritual or aspect of the Congregation that was particularly fun to write?

There’s an illustrated sermon in the book illustrated by our friend and artist Jessica Hayworth who just does incredible work, and it was a lot of fun to create with her. We were really going for that kind of PowerPoint-presentation-feel of a sermon, but of course it’s for a religious text that only exists in Night Vale, so it’s very strange. It’s sort of a play on a Chick tract, an evangelical, simple comic book explaining their beliefs, but it’s describing a belief in a smiling god that will devour the world.

Nilanjana and Darryl have different world views but are seeking common ground. Not to put too fine a point on it, but do you think America can learn from their relationship?

I think it’s set up initially as a conflict because that’s what people expect of that narrative. We have this very simplified narrative of religion and science, that the purpose of writing about anything science and religion is to decide which one is correct and explain why the other one is wrong, but ultimately that’s not how it actually works. I think Darryl and Nilanjana find those gray areas — they find those ways the other person understands things that they don’t because they’re using a different mode of thought, and I think that’s always a very useful thing to consider. Consider someone different than you if they are seeing things about the world that you are not.

What parts of the novel were easiest to write and which were a little more difficult?

We gave ourselves a challenge to write a page-turning thriller, so finding a plot that was surprising and has twists but also works with the absurdity of Night Vale, that was a little tricky. It’s not obviously easy to write a novel but I can’t think of any section that was noticeably harder than the rest.

You and Jeffrey have been working together for a long time. When you’re working on a novel like this, does it help to work together or get some space?

We write separately. We’ve written together for over seven years now so we have a pretty standard method we use. Whether we are writing the podcast or the novels we go off and write our own things — “I’ll take this chapter and you take that chapter” — and then we exchange them and edit them and talk about them. I can’t write Night Vale without Jeffrey.

Witching Hour focuses on the creative process and how we tell stories. The world of Night Vale exists on a number of forms — audio, print, live shows — but besides a few illustrations, it’s up to the audience to visualize the events in their mind’s eye. Is it creatively liberating knowing you’re not limited by what can be depicted visually, or do you hope to put it to film one day?

I think there’s definitely ways of doing Night Vale visually; we’re not against that. It’s just something we protect very carefully because it’s a world that belongs to us and we don’t have a lot of interest in letting someone else do something with it without us involved.