Near the beginning of her speech to a packed house at The Mill on Saturday evening, Sen. Amy Klobuchar called herself “an underdog” in the 2020 race for the Democratic nomination for president.

“But just so you know, every race I’ve run, I start out as the underdog,” Klobuchar said. “When I ran to be the first woman county attorney in Minnesota’s biggest county, I was running against someone who had much, much more money than me — double, triple the money than I had.” Continue reading…

Hancher announced today the lineup for its 2019-20 season, and it’s a thrilling one. The voices of some amazing women anchor the offerings, including singers, ensembles, poets, comedians and plays by and about women. The season also includes the inaugural events of Hancher’s new Kids Club series for young audiences.

The season begins earlier than usual this year with a concert by legendary performer Diana Ross on July 19. Ross is touring in celebration of her 75th birthday, which was on March 26. The singer has a storied career, both solo and with her long-time group the Supremes, who were inducted into the Rock and Roll Hall of Fame in 1988. Continue reading…

The Linn County Board of Supervisors has begun work on a plan to make sure all eligible students in the county will be able to receive at least two years of college education, Board of Supervisors Chair Stacey Walker announced in his State of the County Speech on Wednesday.

“We have yet to determine the specifics or even identify all of the partners [the county will work with], but we have agreed in our head and our hearts that giving our students a chance to further their education is a worthy effort,” Walker told the audience at The Hotel at Kirkwood Center in Cedar Rapids. Continue reading…

Your Village: Is Daylight Donuts closing?

I heard that Daylight Donuts in Iowa City is closing. Please tell me this is just a rumor. Because I don’t think I can go on if it’s really closing for good. –Lydia, Iowa City, via the Your Village feature on LV’s homepage.

Unfortunately, it’s more than just a rumor, but no one should give into donut-related despair, because there’s good news to go along with this bad news. But first, the bad news. Continue reading…

The Makers Loft, selling locally made art and goods, opens on the Ped Mall

The Makers Loft opened its new retail location on the Ped Mall Thursday evening, with a ribbon-cutting ceremony organized by the Iowa City Area Chamber of Commerce. The shop, which occupies the former Zephyr Printing space on the corner of Dubuque and College streets, features a wide variety of carefully selected items, ranging from Wild Farm Soap and the jewelry of Wells Cooperative to decorative throws from Amana Woolen Mills and mixed media art by Emily Jalinsky. Continue reading…

The Iowa Division of Criminal Investigation (DCI) announced on Friday it is investigating an incident from Thursday morning in which two Iowa City Police Department officers fired their guns, and an individual was shot.

According to a written statement from the DCI, “On Thursday, May 9, 2019, at approximately 2:27 a.m., officers with the Iowa City Police Department responded to a burglary alarm at a business located at 538 Olympic Court. During the course of the incident, two Iowa City Police officers discharged their firearms. One person was struck and is currently hospitalized. No officers were injured.” Continue reading… 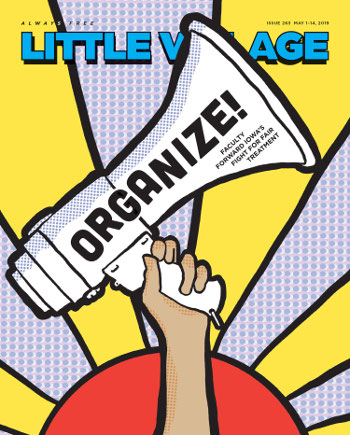