Sen. Bernie Sanders sits down with Political Party Live to discuss policy, and almost gets personal

Sen. Bernie Sanders’ appearance on the Political Party Live (PPL) podcast in Cedar Rapids on Friday night was a mixture of the familiar and the new.

Elizabeth Moen, who had performed at the beginning of Sanders’ March rally at the IMU in Iowa City, performed before PPL co-hosts Stacey Walker and Simeon Talley, along with guest co-host Lauren Beaumont, took the stage at Coe College’s Sinclair Auditorium. Continue reading…

It’s no surprise that Washington Post political reporter Dave Weigel was in Cedar Rapids on Sunday for the Iowa Democratic Party Hall of Fame Celebration. It was a major event in the 2020 presidential campaign — 19 candidates seeking the Democratic nomination made speeches and schmoozed with party activists from across the state. Enthusiastic supporters of the candidates showed up in record numbers, lining both sides of 1st Avenue in front of the Hilton Doubletree, chanting and cheering like college freshmen at a pep rally. Continue reading…

The new University of Iowa (UI) Stanley Museum of Art broke ground on a beautiful sunny afternoon on Friday, June 7. Many excited and emotional spectators looked on as UI President Bruce Herreld; President and CEO of the UI Center for Advancement, Lynette Marshall; Director of the UI Stanley Museum of Art, Lauren Lessing; UI Director of Planning Design and Construction Rod Lehnertz; and the museum’s Interim Executive Vice President Sue Curry (stepping in at the last minute for Acting Director Steve McGuire), performed the ceremonial turning of the dirt. The five took the honorary shovels and turned over the trough of dirt with smiles. Continue reading…

A resident out for a walk along the 900 block of N Governor Street spotted one of the flyers on the sidewalk. It was contained in the sort of clear, plastic bag used to deliver newspapers, and wrapped around an April issue of Little Village magazine (which is not distributed door-to-door, nor in plastic bags). Although that resident only saw one flyer, there were others. Continue reading…

Footnotes on the 2020 Caucus: 19 candidates and a blimp

This year’s Iowa Democratic Party Hall of Fame (HoF) celebration was a record-setting event. More presidential candidates attended and spoke to the assembled party activists and elected officials than any previous year. In part, that’s because there are more candidates this year than ever — 23 at last count — but it’s also an indication of Iowa’s power.

Nineteen presidential hopefuls were at the DoubleTree in downtown Cedar Rapids on Sunday for the three-hour ceremony. That’s five more than attended the California Democratic Party Convention the previous weekend. Continue reading…

The shooting of a criminal suspect by two Iowa City Police Department officers last month was justified, Johnson County Attorney Janet Lyness announced on Friday. ICPD Officer Alex Stricker and ICPD Officer Travis Neeld “acted with reasonable force in defending themselves and others,” when they discharged their weapons on May 9, striking Michael Cintron-Caceres, according to a statement from the county attorney’s office. Continue reading…

“Nor more shall trenching war channel her fields,
Nor bruise her flowerets with the armed hoofs
Of hostile paces”

Seven lines in, and Shakespeare’s Henry IV (Tim Budd) is evoking some very familiar imagery. With an intro like that, it’s no wonder Adam Knight chose to set Riverside’s current production of Henry IV Part 1 during World War I, a conflict elegized in 1915 by Canadian John McCrae with the poem beginning, “In Flanders fields the poppies blow.” Continue reading…

Photos and video: The 2019 Iowa City Pride Parade and Festival 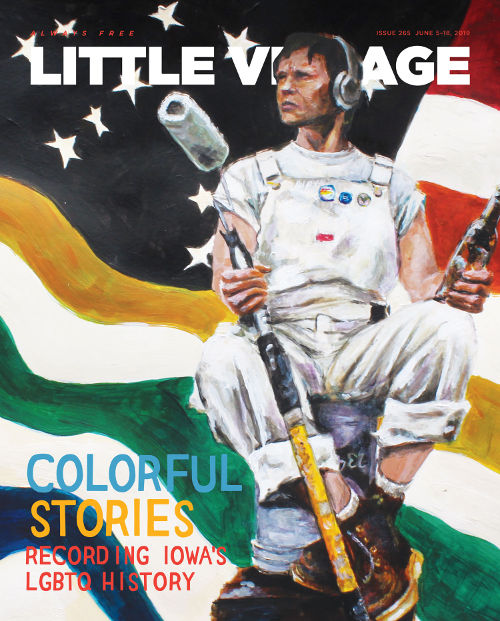