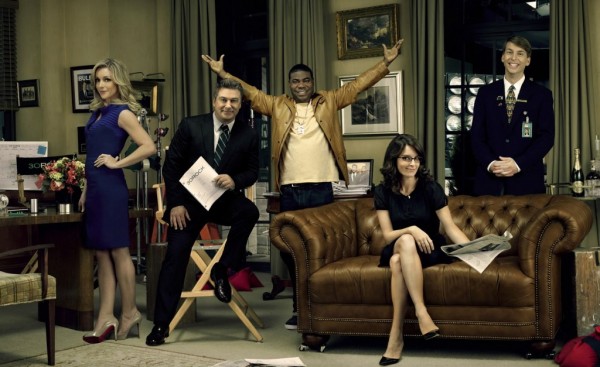 2006 saw the debut of two series that built their plots around the behind-the-scenes action of shows with disturbing similarities to Saturday Night Live. The first was Aaron Sorkin’s Studio 60 on the Sunset Strip. Following the success of Sorkin’s The West Wing, and with a cast that included Matthew Perry, Amanda Peet and D.L. Hughley, this show looked like a sure bet. The second show was 30 Rock.

Created by former SNL head writer Tina Fey, 30 Rock looked like a less-inspired copy of Studio 60, and, among other problems, it had Tracy Morgan as one of its leads. While I knew little about either, I assumed that Studio 60 would be a larger success.

By week four of the fall television schedule, it was clear that Studio 60 was terrible. Boring, preachy and mystically unfunny, Sorkin’s show was more a slog than a joy—something that can also be said for his current project The Newsroom.

While it wasn’t much better at the time, 30 Rock did show promise in its first season. If nothing else, it was funny. Seven years later, America is saying goodbye to an award-winning sitcom with absurdly funny jokes, excellent characters and stunt castings out the ass. Although 30 Rock was not as popular as past NBC sitcoms like Cheers, Frasier, Wings and Seinfeld, history will look kindly upon this crew of misfits for a myriad reasons. Along with its heavy use of meta commentary, astonishingly fast dialogue and timeless pop-cultural references, Liz Lemon (Tina Fey) and Jack Donaghy (Alec Baldwin) are two of the best television characters in recent memory.

Lemon is a grown woman who runs a television show, yet wears a bathing suit to work when she is out of underwear. She wants to be loved, but has incredibly bad taste in men, as evidenced by her involvement with Dennis Duffy (Dean Winters), the Beeper King of New York, Wesley Snipes (Michael Sheen)—not the one from Passenger 57—and Dr. Drew Baird (Jon Hamm), a man who ends up with hooks for hands.

Donaghy, Lemon’s boss, drinks scotch all day and puts on a tuxedo after five because he isn’t a farmer. He’s staunchly Republican and one of the four people in history to have not made an error in judgment during a day—the other three are Jack Welch, Lee Iacocca and Saddam Hussein (no judgment). Donaghy serves as a mentor to Lemon, and the two of them have a touching relationship that the show plays up well towards the end.

The legacy of 30 Rock will be in its absurdity. The setups for jokes on this show came from all angles and usually hinged on some rather unhinged principles. Here are just a few of the many jokes and people that made the show insane yet special over the years.

Pronounced “spa-che-man” (emphasis on the ‘che’) not space-man, Dr. Leo Spaceman was the doctor to the stars. The son of a Nazi doctor, Spaceman trained at the Ho Chi Minh School of Medicine and practiced while heavily medicated.

A picture-perfect narcissist and international pop star, Jenna’s self-involvement frequently came to the fore, especially when she married her husband, a professional Jenna Maroney impersonator.

Former star of Who Dat Ninja and Fat Bitch, Jordan was a literal walking quote machine whose every statement was out of left field, if it made sense at all. Best Quote: “Your ‘boos’ are not scaring me! I know most of you are not ghosts!”

Jenna’s dance track, which hit number four on the charts in Belgium and number one in Israel, is about how awesome and attractive her belly paunch is when she is dancing.

A Chicago-based phone sex line that hired Liz for one of her only acting jobs. The acting and film quality here are almost as atrocious as the lipstick on Liz’s teeth. A mood killer if ever there was one.

Rather quietly, 30 Rock has delivered the first great American sitcom of the 21st Century. Thinking back, it is clear what made this show special: These characters, as weird as they were, became a part of the viewer’s life. We watched them to see what ridiculous situations they might find themselves in. Now the people who love 30 Rock must acknowledge they’ve formed an unhealthy bond to a bunch of imaginary television characters and grudgingly say goodbye.

A.C. Hawley’s absolute favorite quote from 30 Rock is from Jenna: “You know, a great place to meet vulnerable women is Weight Watchers. I did Watchers to stay pageant fit, but it was too much math for a six year old. Thank God I found cigarettes.”