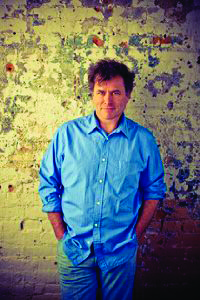 Riverside Theatre is now featuring William Missouri Downs’s play The Exit Interview (directed by Ron Clark), showing Jan. 25-Feb. 17 on Friday, Saturday and Sunday nights. The play is about a professor who’s just lost his job, a sanctimonious university administrator and the colorful cast of characters who interrupt their interview. Recently, playwright Bill Downs took some time out to answer some questions about the play and his work via email.

Little Village: One of the covers of your play features a gun, and the audience will hear gunshots during the play. Without getting into an endless loop discussion on gun control, I wonder if you could talk a little bit about how guns and violence work in your work? I’m thinking of Chekov’s line about how if there’s a gun in Act I, it has to go off by Act III. Is that true? In life, as well as theatre?

William Missouri Downs: The Exit Interview is not about guns or gun violence, it’s about people, placed in a difficult situation, who are forced to evaluate their lives much as we do during an exit interview. It’s the story of a college professor who is in search of the rarest of all commodities—an intelligent conversation. This comes from my life. My wife is from Alabama—whenever we are in Dixie most of our acquaintances spend hours talking about the weather (sans global warming), Alabama football (Auburn sucks), how their snap beans are doing, and which new flavor Bluebell ice cream is introducing next; this is followed by more talk about what the weather will be like during the football game. This would be okay if at some point they talked about something, anything significant, original or moderately thoughtful. We are all going to die and be forgotten. Perhaps we should give that a little more thought between our shouts of “Roll Tide!”

LV: You’re primarily (I take it) a playwright these days, but you’ve also done screenwriting, and The Exit Interview includes a character whose performance is projected onto an on-stage screen. The play is meant to be portrayed in a bare-bones style, in such a way that the audience never forgets they’re in a theatre. What interests you about writing for the different mediums, and how are they different?

WMD: The Exit Interview was produced in Philadelphia recently. On the opening night I met the former head of the Iowa MFA playwriting program Robert Hedley who enjoyed the play very much. After listening to his compliments, I took the opportunity to gently tease him about the fact that twenty years ago I failed to get into the Iowa playwriting program and as a result was forced to go to Hollywood—where I earned an MFA in screenwriting from UCLA and earned a comfortable living as a writer, rather than starving to death as a playwright in a cold water flat in Brooklyn. Thankfully, he laughed.I enjoyed my time in Hollywood but for me there was no pride of ownership in screen or television writing. It’s something I did for money. There’s a saying in Hollywood, “I don’t want good, I want it Tuesday.” I always got my script done on time, but never felt any satisfaction in what I had written.

The general public doesn’t understand that when a writer works for massive multinational corporations like General Electric or News Corporation (or any of their subsidiary companies like NBC or Fox) they are writers for hire. In other words an employee and thus do not have the right to express themselves if their ideas are different from the corporate philosophy. As Jerry Mender writes in his excellent book, Four Arguments for the Elimination of Television, “there are no poor people running television, no Indians, no ecologists, no political radicals, no Zen Buddhists, no factory workers, no revolutionaries, no artists, no communists, no Luddites, no hippies, no botanists, to name only a few excluded groups.” Playwriting allows me the freedom to write without being censored.

As for the difference in method, I’ve always been a playwright at heart. I think that’s why I wrote mostly for sitcoms, I was really writing small plays with limited casts and sets. I see my stories happening on stage not in real life. I relish the limitation of the stage. I bathe in the energy of a live audience. I enjoy the freedom of telling stories without self-censoring so I can make a buck.

Screenwriting is a job. Playwriting is a passion. I walked away from film and tv writing because I got bored. Plays are in my soul.

LV: Would you want your plays to be adapted into films?

WMD: I don’t think I write plays that anyone would want to adapt into movies. Years ago I optioned a screenplay to Filmways. It was a modern version of Othello that used Chicago cops. During a note session a producer asked me, “Why does Othello have to be black?” Do you think these people are going to be interested in The Exit Interview, a comedy that pokes fun at Bertolt Brecht and asks egghead questions about faith, fate, science and religion?

LV: The main character of The Exit Interview is a Brecht scholar on the verge of losing his job. I think of Brecht largely as a serious socialist playwright, perhaps due to an early and deep exposure to The Caucasian Chalk Circle, but your play is listed as both a drama and a comedy. Can you talk a little about Brecht in relationship to your work?

WMD: Bertolt Brecht has always intrigued me, but almost every production of his plays I’ve seen have bored the hell out of me. Directors seem to forget that Brecht wanted to wake the audience up, not lull them into a siesta. He wanted the audience to consciously consider weighty issues not be so absorbed in the play that they forget themselves or that they are in a theatre. I write philosophical comedies. When I’m firing on all cylinders the audience is laughing but at the same time alienated enough from the play so that they can consciously think about the philosophical ideas the play proposes. Theatre people often say that theatre must separate itself from movies and television. This can be accomplished by making theatre, as Brecht did, into entertaining lecture halls where the audience comes to hear the one thing they cannot get from Hollywood, ideas!

LV: You were born in Iowa but you’re living in Wyoming currently. Has living in the West changed anything about the way you think or write?

WMD: I don’t spend much time in Wyoming. I’m thrilled to be coming back to Iowa. I was born at Mercy Hospital, which I understand is right near the theatre. I’m going to try to spend a little time cultivating my Iowa roots. I left when I was young, but have always considered myself an Iowan.

LV: The Exit Interview is part of a “Rolling World Premiere” from the National New Play Network. Could you talk a bit about the project and about what it’s been like to have your new play produced in so many disparate places in rapid succession?

WMD: The production at Riverside is the fourth production of the play in four months. Each production has had totally different set designs, casts, directors and interpretations. The Exit Interview has been staged as a broad farce and serious comedy. It certainly has been interesting and sometimes uncomfortable to watch the various interpretations. Seeing them back-to-back reminds me how much wiggle room there is when a script is staged.

Laura Crossett is a librarian and an Iowa City native.