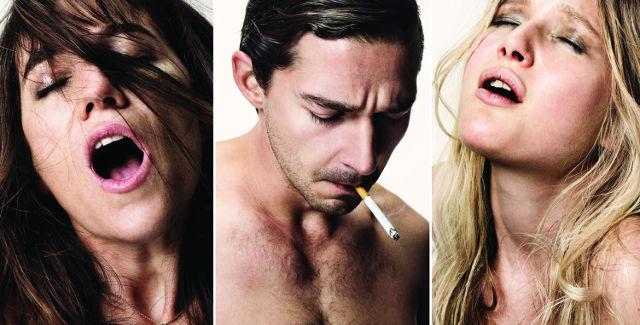 Lars von Trier has a flair for being provocative. Remember when he called himself a Nazi? His new movie, Nymphomaniac: Volume 1, which opens at FilmScene on April 4, is no exception. The title is deliberately titillating, as is the poster, which shows the main character having an orgasm. Actually, there’s a whole series of posters with all the principal characters having orgasms. Most press about the movie devotes a detailed paragraph to how its explicit sex scenes were made by digitally fusing the actors’ good-looking parts with porn stars’ raunchier parts. Aren’t you a little curious about Shia LaBeouf’s and Stacy Martin’s genitalia doubles?

But there’s more to Nymphomaniac: Volume 1 than sex. In fact, the sex scenes, while fairly graphic, aren’t that big of a deal (Volume 2 is a slightly different story). As is usual with von Trier, what shocks and wounds are the sharply-edged performances that come at you from every direction, from the intentionally artificial to the rawly emotional (wait ’til you get a load of Uma Thurman’s cameo). I’m no devotee of von Trier and his abusive visions, but I think that Nymphomaniac is his best film since Breaking the Waves.

Von Trier has found a cinematic way of evoking how it feels to stumble on and to devour a good old intellectual-erotic novel, like Georges Bataille’s Story of the Eye. With a blend of courtliness, precision and raunchiness, Nymphomaniac unfolds in neatly arranged chapters, each one inspired by some seemingly random comment from the intelligent Seligman. The fusion of what’s highest and lowest in human nature is marvelously achieved in one scene where a three-part polyphony of J.S. Bach is orchestrated with the sex styles of three of Joe’s lovers.

Joe, I imagine, is meant as a stand-in for von Trier as an artist, and Seligman as a stand-in for the kind of people who go to see Lars von Trier movies. He’s worldly, irreligious, almost impossible to shock and nice to a fault. Joe improvises her story with what’s familiar to Seligman—fly-fishing, the Fibonacci sequence, Bach—in order to convey her obsessions and shock him awake. Irreligious herself, she nonetheless longs for the supernatural reality of sin, both as a way of having something substantial to violate and as a way of honestly addressing her own brutal drives. 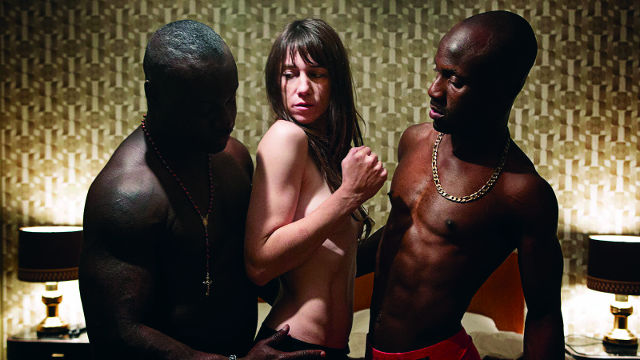 While this allegory of artist and audience comes across loud and clear, there’s simultaneously a living, breathing reality to Joe and Seligman, in large part illumined by the superb performances of Gainsbourg and Skarsgard. What I find irritating about a lot of von Trier’s movies is that his cinematic world is often composed exclusively of abusers and doormats. But Joe and Seligman outstrip any form of categorization, especially in their curious collaboration in telling the story.

In a way, Nymphomaniac’s real subject isn’t sex but storytelling. Basically the recipe is to evoke the world in its all its desirous, awkward fleshiness, but also to understand and order it with graceful precision. For instance, when Joe is first deflowered, a math equation tallies the number of times that her 15-year-old beau humps her. (Not that many.) There’s even an oddly affecting—and helpful!—scene where parallel parking is mapped with geometric precision.

Not everyone’s a Seligman (the name means “blessed one” in German); not everyone is going to listen with equanimity to the obsessive, violent stories told by von Trier. I bet people have stormed out of every one of his movies in disgust or rage. Nymphomaniac, particularly Volume 2, is no exception. His movies are like kids who do increasingly naughty things in hopes that their indulgent parents will finally lay down the law and punish them. But you have to appreciate the imaginative art that he employs in his wild attempt to turn us against him.