I don’t know what’s more shocking: that twenty-three James-Bond movies have been made over the past fifty years, or that I’ve seen them all willingly. To understand why Skyfall, Sam Mendes’s fine reboot of the 007 myth, is such a supremely enjoyable movie, we need to understand why even the aggressively bad Bond flicks, of which there is no shortage, are so compelling. 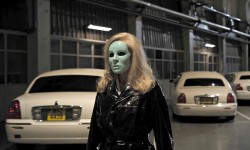 At a multiplex it’s fun to wander in and out of different movies. Holy Motors is about a Monsieur Oscar who wanders in and out of eleven different scenarios in the course of a day, seeking death and love and renewed life. Though it makes about as much sense as a plot constructed out of eleven random films, it’s interesting and weirdly compelling. Plus, it’s got Eva Mendes and Kylie Minogue. In French, English and Chinese, with English subtitles.

Satrapi, the graphic novelist famous for Persepolis, teams up with Paronnoud for this delicious story about a famous Iranian violinist seeking love. In French, with English subtitles.

The director of Back to the Future and Forrest Gump brings us a faltering movie that Denzel Washington, with a gripping performance, manages to land successfully.

The answer is roughly the same as to the question of what makes life worth living: music, beautiful women, martinis, bad guys, suave outfits, gadgets and exotic scenery—pretty much in that order. As in life, the plot of a Bond flick isn’t that important, the world is always improbably saved and character development happens rarely. What matters is that we savor it all with a smirk of naughty pleasure, as perfected by Sean Connery in Goldfinger.

For decades, audiences sat down to all movies with an immediate ability to smile naughtily at their artificiality. Now, we require a certain mental massaging in order to enter their mythic domains. For a Bond flick to work on us, it must present itself as “edgy”—in other words, push against its narrative rules, serve up some gratuitous violence and betray doubts about the whole myth. The first time I noticed a similar psychodynamic was in Clint Eastwood’s Unforgiven (1992); Christopher Nolan’s Batman movies are more recent examples.

Despite appearances, these movies aren’t critical takes on their superheroes; by the end, they’ve served them up in full force. We just need our mentalities to be massaged before we can enjoy the goods, sort of like perverts who need kinky foreplay before they can get aroused. Daniel Craig’s debut as Bond in Casino Royale (2006) initiated this phase of “kinky” Bond mythology. When first asked if he preferred his martini shaken or stirred, he growled, “Do I look like I give a damn?” After a slight misfiring in Quantum of Solace, Skyfall allows the steel-cold Craig to continue in this vein.

The movie begins with Bond getting shot and apparently dying. After government inquiries into the relevance of MI6 and various murders that Sean Connery would never have permitted, Skyfall ends with a mythic sequence in the misty boyhood home of James Bond. By that point, Sam Mendes has completely prepared us to savor the ejector seat of an Aston Martin, Monty Norman’s immortal dum-didi-dum-dum theme and the death of a crazed megalomaniac.

So let’s not kid ourselves. Our James Bond is no more realistic or edgy than Roger Moore in Moonraker. If anything, he’s more mythic than ever. Daniel Craig is James Bond on steroids, probably literally. In his debut he emerges glistening from the waves in tight baby-blue swim trunks, just like the yellow-bikini’d Honey Rider in Dr. No, or Aphrodite out of Mediterranean foam. The genius of Sam Mendes, who’s also directed films like American Beauty and Revolutionary Road, is that he’s crafted a taut, smart movie that allows us to savor this good old mythic Bond.

Besides cool chase scenes, gorgeous cinematography and a brilliant ending, the quality of the acting in Skyfall is uncharacteristically high. Judi Dench, Ralph Fiennes and Albert Finney all turn in very solid performances. Javier Bardem’s take on the villain will solicit mixed reactions, but I love the creepy craziness of it. And Daniel Craig, despite his over-seriousness, is by far the best Bond since Connery.

After fifty years, from 1962’s Dr. No to 2012’s Skyfall, the Bond myth is as potent as ever. The final scene of Skyfall more or less promises 007’s return to the silver screen. Given the imaginative power of Hollywood, I have no doubt that he will.

Scott Samuelson teaches philosophy at Kirkwood Community College and blogs about music with his son at billyanddadwordpress.com.