It can get painfully hot in Iowa in the summer, and what better to cool than a creamy, frozen treat? Even in winter, Iowa’s selection of ice cream, frozen yogurt and other frozen confections is top-notch.

Tucked away behind a gas station on the outskirts of town lies an adorable time capsule of Iowa City history and delicious ice cream. Each spring, for the past 50 years, Dane’s Dairy, a drive-in ice cream shack staffed by the friendliest crew of gangly teens, reopens and blesses us with sublime cones of fresh strawberry soft serve. There are other frozen treats on their vast menu, including a signature ice cream bar made with hot fudge and peanuts, but it seems there are, sadly, never enough days in summer to try them all. Curiously, there is also an assortment of what appear to be carousel animals installed around the property, so you can sit on a little metal horse while you eat your cone, and pretend you’re in a David Lynch movie. Or just sit at one of the picnic tables; the ice cream will still be exactly what you need on a hot summer evening.

Located near the Coralville Reservoir, Funcrest Dairy and Grill is open seasonally on evenings and weekends. Funcrest offers campers, cyclists and beach-goers traditional summer food: ice cream, burgers and fried goodness. The chocolate or vanilla soft serve, which is extra rich and creamy, can be served in a cone, and also with fruit or candy to make it a shake, sundae or “Cyclone” (Funcrest’s version of a Blizzard). Funcrest is also the halfway point on one of the area’s most popular bike rides, and there’s little better than a root beer float to help you refuel for the hilly return to Iowa City.

A 30-minute drive will take you to Wilton, Iowa, home to the world’s longest continuously running ice cream parlor, open during warmer months. Opened in 1860, Wilton’s Candy Kitchen is listed on the National Historic Register, and the interior and exterior have changed little since they opened. Sit on one of the round chrome bar stools and talk to the current owners, George and Thelma Nopoulos, who will surely have a recommendation for what to order. The ice cream is homemade, along with many of the toppings. Try the banana split, or sip on a phosphate and reminisce. 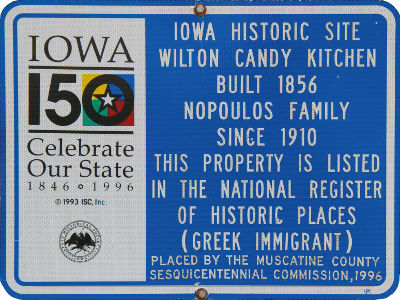 Open year-round, Heyn’s has more than 40 flavors of hard ice cream, all made in-house. Flavors range from the decadent to the divine and include a stunningly creamy coconut chip, flecked with coconut and dark chocolate, as well as banana pudding, studded with vanilla wafers and as lavish as its namesake treat. There’s also a full menu of shakes and soft-serve confections. Hand-scooped pints are available to go, so if you can’t decide on a flavor, take some home and try them all.

Amid the profusion of fro-yo shops that have opened in the Iowa City area over the past couple of years, Yotopia stands apart. For one, it is owned locally by Veronica Tessler, who makes a point to engage the community through various projects, including public art. Tessler has also built relationships with Iowa dairies, and you can taste the efforts in what is certainly the creamiest frozen yogurt in town. And the inviting space, interactive row of self-serve machines and buffet of toppings make this a downtown sweet spot.

If you are looking for a more formal atmosphere in which to enjoy your ice cream, head to Baroncini. Dessert is probably the best thing that the restaurant does, and like the rest of its menu, everything is inspired by Italian cuisine. Many of the desserts come with gelato, and while it isn’t made in house, most of the accoutrements are. The gelato “affogato con espresso e il biscotto” is pure pre-recession nostalgia: large in portion, lavish in presentation (served in a martini glass, no less) and brimming with chocolate sauce, espresso, whipped cream and strawberries. It is over-the-top indulgent, not to mention delicious.