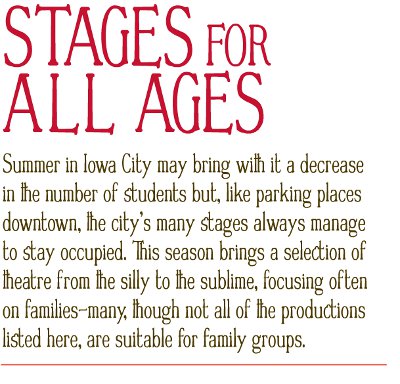 No summer in a self-respecting City of Literature–or, for that matter, any self-respecting city of any size in the United States these days–would be complete without some Shakespeare. Riverside Theatre obliges in its usual stylish fashion by offering not only Shakespeare but a little Eugene O’Neill to spice things up. Two Gentlemen of Verona and Ah, Wilderness! will run from June 17 through July 10 at the Riverside Theatre Festival Stage in Lower City Park. The former is among the sillier plays Shakespeare ever wrote, and Shakespeare does silly as well as he does anything. Expect manic love triangles, disguises and rampant comic effects. Ah, Wilderness! is a sort of young man’s coming of age story from 1906. Expect love, heartbreak, recklessness, high spirits and familial barbs and love.

For a very different take on Shakespeare, check out Dreamwell Theatre’s production of Henry V. It is always slightly worrisome to hear a director say “Our cutting retains the interesting questions” of a play, but a Henry V that focuses on doubt seems like an appropriate interpretation for our current historical moment–although how the doubt will work without the glory is hard to know. It will also be interesting to see how they represent the vasty fields of France in the basement of the Unitarian Universalist Society. Check it out June 3-12. Tickets and more information are available here.

Another side of war will be on display at Dreamwell’s production of Soldier’s Daughter, which takes place on a farm–and will be performed at Janet Schlapkohl’s farm–where a girl is waiting for her father to return from his latest tour of Afghanistan. Performances will take place July 15-23.

The University of Iowa

The Effect of Gamma Rays on Man-in-the-Moon Marigolds
I Do! I Do!
Lost in Yonkers

Things are not slowing down for the summer at the UI Theatre Department. Iowa Summer Repertory Theatre features three plays, all looking at different kinds of families.

Paul Zindel is probably best known for his wonderful, funny and heartbreaking young adult novels, most notably The Pigman. But he also wrote a wonderful, funny and heartbreaking play called The Effect of Gamma Rays on Man-in-the-Moon Marigolds about two girls and their single mother who, though they all work against each other, are still desperately trying to hold their family together. The production runs June 21-July 7 in the David Thayer Theatre.

Iowa Summer Rep also offers other takes on families–one in the musical I Do! I Do! and one in Neil Simon’s Lost in Yonkers. The former is a two-character number (from the creators of The Fantasticks) and it similarly explores a couple’s relations over time. The latter is one of Neil Simon’s classics about a nutty, quirky family in 1942. I Do! I Do! runs July 1-24 in Theatre B, and Lost in Yonkers runs July 14-23 in E.C. Mabie Theatre.

Love Letters
G.I. Jukebox
If You Give a Mouse a Cookie
The Queen of Bingo

More entertainment, for a variety of family configurations, is available this summer at Old Creamery Theatre. They’ll offer a dinner theatre at Fireside Winery of June 9, July 23 and July 28 with a performance of Love Letters, a play about a couple that’s told through their correspondence over many years.

G.I. Jukebox, running June 2-July 3, takes you back in time to USO tours of times past, so if you like that sort of thing, it should be up your alley. It may provide the glory-of-war side of the story that Dreamwell’s Henry V lacks.

People with small children are likely familiar with Laura Numeroff’s If You Give a Mouse a Cookie (hint: It’s a bad idea–those mice are greedy). If you’d like to see how that series of if/then statements translates into drama, you can do so from June 18-July 2.

For your last bit of summer silliness, Old Creamery offers The Queen of Bingo, about two cantankerous sisters who, well, really like Bingo. It runs July 7-July 24. More information on all their shows is available here or by calling 800-35AMANA.

Finally, stay tuned for more to come! Hancher unveils its 2011-2012 calendar on June 6 here And, you can sign up for announcements from Working Group Theatre here.