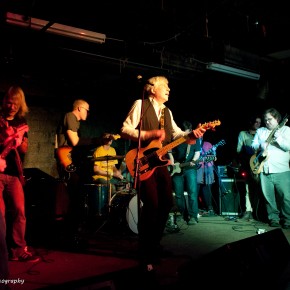 Well, we’ve got the first night of Mission Creek under our belts, and aside from a little tinnitus and maybe a hangover, I think we’re all doing great. If you were at Gabe’s last night, you’re likely doing really well after that monumental performance from Rhys Chatham and his crew of Iowa City guitar wizards. But I’ll get to that in a minute.

I have to complain for a second. About myself. I was late to Gabe’s (blame the evening class I take) and I missed most of Solid Attitude’s set. While I have seen them a bunch and can probably catch them again soon, I was a little bummed that I missed them on such a rad bill. I’m going to go not-so-far out on a limb and say they killed it.  I managed to get three photos of them, so “boooo” to me.

I had never seen Rene Hell perform before, but I was pleasantly surprised when he whipped out his Mac Book and then whipped up a whirlwind of sounds and rhythms. His performance was short, but the music encompassed a variety of moods, going from heavy to airy and dark to light in a giant electro-auditory swirl.

And then came Rhys and 10 local musicians. Local guitarists Doug Roberson, Sam Locke Ward, Grace Locke Ward, Josh Hoffman, Colin Samek,  Brandon Gassman, Jordan Wagner, Brendan O’Keefe, Steve Ross, and drummer Ed Bornstein stood in a sort of flying-V formation while Chatham orchestrated an hour-long crescendo of sound. It was crazy to watch him turn to each musician at the right time and command them with a powerful glance they all seemed to return. The eye contact between Chatham and each player was notable throughout the performance, and it was a really interesting dynamic to observe. The group played 3 compositions, each one seeming to last a pleasantly long time, starting out smooth and simple, like small waves, then building to a tsunami of  well-controlled musical chaos. When they were done, Chatham shook each of their hands with a giant smile on his face. It was a dynamic experience that has set an amazing mood for the rest of Mission Creek.