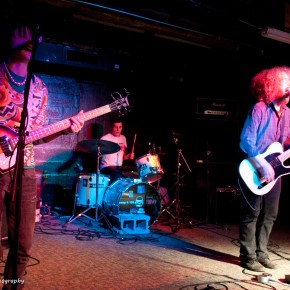 Ugh! I am such a procrastinator and the week is already slipping away from me. Despite my faults, I didn’t want to pass up an opportunity to share some photos and details from Good Habits’ Cassette Release show last week. Yes, folks, bands still release albums on cassettes…really good albums, too. Last Friday at Gabe’s, local three-piece power pop band Good Habits officially dropped their album “Never Leaving” with the ruckus help of Cop Bar, Rusty Buckets and Erik Whittaker.

Erik Whittaker kicked off the evening with a set that left me feeling, well, content. There’s no better way to say it. There’s something about a man who can cover both Roy Orbison AND Patsy Cline, and make the songs sound like his own. He also played some of his original music, songs I’ve come to know and love after only seeing him perform them a few times. They stick. As far as I know, Whittaker doesn’t have any solo recordings, but I bet if we all start bugging him about it, maybe a recording or two would happen.

Resurrected two-piece Rusty Buckets took the calm that Whittaker had blanketed the room with and added a few sticks of dynamite. I’ve seen Rusty Buckets onstage a couple of times in the last few weeks, and I’m sold. Tim Krein’s howling vocals are the perfect companion to Ross Meyer’s hard hitting, full-body drumming. A little bird called facebook told me they are going to record some new songs in the next few months. In the meantime, here you can find some of their exisiting jams.

Cop Bar continued the musical mayhem of the evening with a sound that was slower and sludgier than their previous performances, which could be characterized as a long string of minute-long songs full of eardrum-shredding grindmetal goodness. Also, it was so loud it made my vision blurry. Despite this “softer side” of Cop Bar, they still had a ferocious energy that hits an apex within frontman Sam Locke Ward. There’s a balance that exists while watching Sam tear around stage in front of stoic bandmembers Brandon Gassman, Ben Smith and Zach Westerdahl.

Good Habits closed out the release party with a bouncy, guitar-ripping set. Trio Jeff Mannix, Molly Enochson and Luke Ferguson make a big sound. Their music is catchy without being cliche, and, I think, is likely to appeal to fans of many genres, mainly pop, punk, and garage rock. I’m not 100% sure, but I think their song “Get Protection” is the one that almost made me spontaneously break into air guitar. Good Habits’ 12-track album “Never Leaving” is available here on Bandcamp, or track them down on the interwebs to get an actual tape.