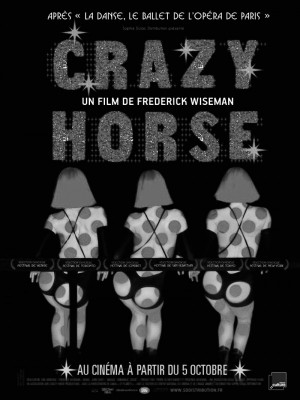 So, Patrick, to summarize the weekend: We saw one piece by Les Dames du Burlesque d’Iowa City, and each of us also did our own thing. And we saw Frederic Wiseman’s Crazy Horse.  Let me try to start the conversation: how do you and I, as men in the United States in the 21st century think about world we live in with respect to men, women, beauty and sex?

The day after we saw the movie, I went to hot yoga. The group at the studio consisted of women of almost every age and most sizes, as well as a trio of men in our late forties and fifties. At the end of the session, I realized everybody in the room, to my mind, was beautiful. Maybe too tall or too short or too old or to heavy to be on stage in Paris, but beautiful because they were in their bodies and moving. I suspect that what we call beauty is actually a description of how we see the world, not of the world as it is in itself.

I think people of my generation would need to work to understand the specific type of art the burlesque show we watched is a part of, but that we are generally better equipped to appreciate it. I think that’s a good thing; this sort of performance is intended to push boundaries. I think my generation can be in danger of worrying too much about our sexuality (what do I like, what don’t I like, how do my ethics and morals complicate those desires, what do those things and their interactions say about me as a person, etc.), so a hypothetical point where we could both be unfazed by what we saw could be helpful; but that point wouldn’t be burlesque.

I agree that beauty is a description of how we see the world, but I don’t think that’s the same as art. Art is the act of presenting a vision of the world to others and allowing them to draw conclusions. In this way, I think burlesque is art, as it presents a vision of overt feminine sexuality we don’t see in our waking lives. My generation has grown up in a world of fantasy and science fiction, video games and pornography. As a result, I feel we have the potential to be far more open to ideas that don’t exist within the norms of our everyday life. But I don’t know if my generation would be able to see past the casual sexuality on display, either because they are unequipped to understand it or unwilling to look farther.

You say that part of the task someone your age faces is “what do I like, what don’t I like, etc?” I think one of the differences between being 19 in 1973 and in 2012 is that these “What do I like?” questions open differently. I don’t for a moment believe it’s easy to come out if you’re gay, or to seize control of your sexuality if you’re a young woman, or to navigate the subtleties of attraction and rejection if you’re anyone. I do think there are more things in popular culture that suggest our identities and proclivities, especially sexual ones, are fluid, socially constructed and incomplete. When I was growing up, if a man found beauty in another man’s body, he had to search for places where that response was seen as normal. Now, there are more spaces in our world for that perception to go unreproved, and even celebrated.

On the other side, it seems many of the spaces that validate multiple forms of desire are commercial spaces. Like the Crazy Horse. And the commercial sphere is very unforgiving of certain kinds of imperfection. I think the sexiest moment in the documentary was when the choreographer/director was dancing his dance for the women in order to teach it to them. He was beautiful and the dance was too—but he can’t make the kind of money he makes, or have the kind of stage and lighting and design, without relocating his beauty onto the women.

What concerns me is that the commercialization of sex, the making of desire into a consumer choice rather than a path to—What? Enlightenment? Ecstasy? Love?—is just as oppressive as the repression that was around when I was coming up.  What would you say is the greatest barrier to freedom and joy among you and your friends?

I feel the commercialization of sex and interpersonal desire in general is only increasing as our ability to transmit and process images and information increases. Writing, and later radio and television, started the process of allowing people to communicate to large audiences, across social and cultural lines. This can allow us to incorporate more varied beliefs and more complicated views of the world, but it can also bring about a homogenization of culture.  In contrast, it seems the Crazy Horse and the people who work there have more freedom, since as an independent production team and a local venue they have more freedom to display and describe different ways of expressing sexuality without the pressure of producing something for mass consumption. It allows them to diversify as they choose, instead of as the market dictates.

So I feel that burlesques in general don’t have nearly the same impact as more mass-market approaches.The overall impact is limited by its area of effect. Most people my age are bombarded daily by media just as sexualized as burlesque; the difference is, advertisements and television are usually less overt.

We’re conscious that we’re both male, and that no women’s voices are heard in this. We’re conscious we’ve only begun this discussion. We hope we’ll hear from others, in the comments, in your own writing, in the street.

Patrick Dolan teaches Rhetoric at The University of Iowa. Born in 1953, he was raised in London Ontario, Saskatoon Saskatchewan, Houston Texas, and Indianapolis Indiana.

Patrick Howes Dolan was born and raised in Iowa City. He attends the University of North Carolina at Asheville.