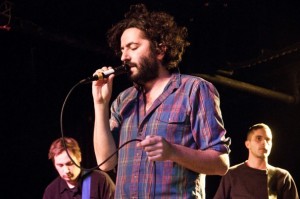 In a column I wrote a couple months ago, I talked about taking a chance on live music and how more people should. For this particular concert, I took my own advice because I went to see Destroyer and Sandro Perri knowing only three things about both acts: they’re Canadian, both are internationally known, and Destroyer leader Dan Bejar is also in The New Pornographers. I had never listened to a single song from either artist before this show, so I’m not exaggerating in saying that I went into this concert blind. By the end of the show, it was clear why so many people were buzzing about it beforehand.

The show opened up with Sandro Perri playing an excellent set. Fusing electronic elements with a tropical vibe and hints of Roxy Music and Steely Dan, Perri’s music was very listenable and compelling with a very strong pop foundation. There were really interesting, subtle notes in the music like the looped flute playing throughout the set that added a fantastic dynamism and complexity to the affair. The overall tone was relaxing and smooth with a sound that was particularly appropriate for the current summer. At numerous points, I found myself wanting to be on a yacht in the sun, wearing all white, and listening to his music. Most importantly for me given some of the openers that I’ve seen recently (I won’t name names), Perri did not overstay his welcome. He left the stage with the audience wanting more from him but also ready for Destroyer to come on stage.

When Destroyer came out, there were two things that were immediately apparent: there were a lot of dudes on stage and they were wearing a lot of plaid. While this gave me the impression that they would do their best grunge moves for the audience, I saw something very different. These very scruffy looking guys started their set with a bang, recalling the sounds of David Bowie from the 70s when he still rocked a bit. As the set moved along, more and more sounds began to come out. Glam rock elements were very prevalent during the set and mixed with 80s soft rock, 60s surf, new age music, and dissonant experimentalism.

Much like Perri, Destroyer played a compelling set full of style and tempo changes as well as a lot of fun. The music was classy, sophisticated, smooth, sensuous, intricate, and, most importantly, beautiful. Lead singer Dan Bejar was a compelling figure to watch on stage as he moves in and out of sight. His singing was interesting because when he did, Bejar would close his eyes and go into something of a trance, departing our world and entering into the song. The musicianship on the night was excellent with everyone playing harmony and complementing one another throughout the rather complexly structured songs. Their enthusiasm and passion made for quite the compelling visual spectacle during the show.

For someone who came in blind, both Perri and Destroyer made a fan out of me. I clearly was not the only one who was impressed as the band came back out and played an excellent one long, multi-part song encore. In thinking back on the show, this was one of the best shows I’ve seen this year, entering into an elite space in my concert viewing and reminding me that it’s always worth it to check something out because you can never know what will happen.