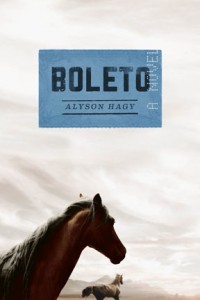 Early into Alyson Hagy’s new novel Boleto, protagonist Will Testerman’s father complains about the recent influx of people moving to the tiny town of Lost Cabin, Wyoming, where the Testerman family resides on their farm. “When I was a kid,” he says, “you couldn’t pay people to live in this part of the state. Too cold. Too much isolation. Now everybody in America thinks they’re in love with fresh air and loneliness.”

I spoke with Alyson Hagy recently and asked her if this was actually the case. Will’s father, Hank, who runs the family farm as well as a print shop in town, is overworked, underpaid, as tormented by bills as St. Anthony was by demons, and consistently frustrated; I wondered if perhaps he had an exaggerated view of outsiders. My suspicions were unfounded.

“Yes,” said the author, who currently lives in Laramie, Wyoming, and has spent the past 16 years living out west. “Yes. Yes. People want their space. They come and they think they want peace and quiet.” She said a new wave of people are fleeing the cities, stressed out by lives of excess, searching for a little plot of land where they can live simply, privately, in the beauty of the natural world. At least, that’s the idea. “A lot of them are ‘getting away from it all’ for the wrong reasons. Most of us aren’t prepared for that kind of solitude.”

Boleto isn’t a novel about the new arrivals in Wyoming, nor is it really about solitude. At the heart of the novel is the desire to look the romanticized notions of the American West right in the face, to ask what is real and what is just a fantasy. “I’ve spent fifteen years trying not to write about cowboys,” the author admitted, “I think it’s perilous, and it’s a big cliché in our culture. But I finally was drawn to address it in my own way.”

Will Testerman is very much a cowboy. Like many Western film heroes, he’s instinctively good with horses. He doesn’t speak much, and when he does, he tends to get what he wants. He’s cool, collected, and pretty damn good at poker. But he’s also a relatable character. He’s only twenty-three, with lots to learn. He makes mistakes, has a mother who nurtures him and a father who bosses him around, something we’d never see from, say, a Clint Eastwood character.

Boleto’s Wyoming landscape is equally complicated. Take for example this passage, which juxtaposes the flowing, lengthy description of the natural world with the blunt reality of the human beings who inhabit that space: “He saw large bands of pronghorn along the road west of Shoshoni, does mostly, their beige coats motley from the long winter, their ribs beginning to spread in pregnancy. He saw a For Sale sign at the entrance to the Flying M Ranch.” This is an American West that has felt the recession as strongly as the rest of the country. Ranches are closed, characters are often working multiple jobs or completely out of money. Most of the thriving businesses are owned by New York businessmen, or wealthy Europeans. One of Will’s former bosses, Mr. Passante, was actually a rich man from Mexico masquerading as an Italian.

Yet Alyson Hagy isn’t so careless as to make the division between owner and employee a strict division between bad and good. The novel’s second act takes place on a dude ranch, where workers and visitors alike come from all over the country. Will has a short fling with an East Coast college girl, and works the ranch with a drunkard from Detroit. All the characters are unique, many are memorable, and you’ll have a hard time finding one that isn’t at least a little sympathetic.

The author has spent some time on ranches like Boleto’s Black Bell Ranch (though she made it clear that “[She] was not a dude,”) and noticed that though both employees and visitors at first make a point of cloaking themselves in their apparent differences, “that all falls away, if the summer’s successful.” Boleto shares that mentality. Alyson Hagy doesn’t care so much about her characters’ ancestry or social status, so much as what they do or say as human beings. She suggested to me that this is less a question of morals than it is a question of workmanship. A good man enjoys his job, is skilled at it, and gets his work done. One of the novel’s uglier characters is “really not good at what he’s supposed to be good at. And he knows it. So then he becomes a jackass about it.” However, the novel’s final act makes it clear that the author understands just how much of a corrupting influence money and power can have on a person.

Boleto boasts great characters, but the quality of the prose is what really defines the book. Will handles his horse expertly, treating the filly well, understanding her intentions and desires, nurturing her without ever allowing himself to be affectionate, and Alyson Hagy conducts her language in a similar way. The confidence of writing is apparent, as is the overwhelming knowledge woven into the novel. Alyson Hagy knows just about everything about the world her characters inhabit, and there’s a sense that she knows plenty of things that are never even hinted at on the page. Her language is distant yet intimate, but never sentimental.

Boleto has its flaws, and the author is aware of that fact. She mentioned that because of the e-book revolution, Boleto has been picked up electronically by readers who generally stick to what Ms. Hagy called “a mad and pretty diet of book mysteries.” They typically claim in reviews that “it didn’t have enough plot.” “Okay, they’re probably right,” the author said, although she seemed to think the trouble came because those readers are “used to a diet of incessant action, which is not the world I live in.” I agree with Ms. Hagy on this point, and I consider myself much more of a literary reader, but I tend to think these reviews have a point. Boleto’s three acts are connected in that they’re all about Will Testerman and his new filly, and they follow in chronological order. But the sections feel a little disconnected, and the overall story of the novel suffers for it. If Boleto were two hundred pages longer, it could have been a sweeping new Western epic. And while such an epic is exactly what the author didn’t want to write, in its current form, Boleto feels more like a study of a character and the world he inhabits.

This may sound like a condemnation of the novel, but the fact is that Will Testerman and the world he inhabits (or at least the way the author describes them) are fascinating. I devoured the book in just two days, and I think any lover of language or character will do so as well.

Alyson Hagy hasn’t been to Iowa City in 10 years, but she returns (triumphantly, I hope) this Wednesday, June 13. She’ll be reading at Prairie Lights at 7:00. If you’re lucky you can catch her browsing the shelves, searching for new books to add to the “tower of excitement” she has on her desk at home in Laramie.