My son Alasdair turns two next month, and lately he has been immersing himself in the wild world of sound. If mom walks up the creaky wooden stairs to his bedroom, he’ll say, “Mommy sound!” Or, when I crack open a PBR, Alasdair points to the can and blurts out, “Daddy sound!” A train whistle from outside always prompts, “Faraway train sound!” However, there are plenty of times when something that he can’t identify rever- berates through the air, which causes Alasdair to anxiously ask, “Sound? Sound?”

He says that a lot when I play music in the house, because lately I’ve been spinning records loaded with all sorts of strange noises. I blame all this on Dirty Three, an Australian group whose sprawling songs can stretch far out into outer space. This trio—which consists of drum- mer Jim White, bassist/guitarist Mick Turner and multi-instrumentalist Warren Ellis—counterbal- ance the lack of vocals with lysergic layers of ethereal atmosphere. Ever since I saw them per- form at Gabe’s this past September, I have been rediscovering all the awesome Instru-Mental music scattered throughout my record collection. “Instru-Mental?,” you might be asking yourself, “What in the world is Instru-Mental music? Why have I never heard of this genre?” The answer is simple: I just coined the term during that Dirty Three show, which is why you won’t find it in any music encyclopedias (yet). As for a definition of my newly invented genre, here’s the simplest one I could come up with: mind-expanding music with-out words. It’s more of a meta-genre, because Instru-Mental music spans all sorts of styles, from rock and jazz to hip hop and electronic dance music. I have yet to find an example from Christmas or country music, though in an ideal alternate universe Taylor Swift has already collaborated with Dirty Three on a holiday record.

I humbly offer you a few nominations for inclusion in the Instru-Mental music canon:

Pink Floyd’s late-1960s extend- ed guitar freak-outs? Check. The droning Krautrock experiments of Neu!, Can and Faust, along with the post-rock bands they in- spired, like Mogwai, Tortoise and Stereolab? Double-Check. DJ Shadow’s or J Dilla’s spaced-out instrumental hip hop, the dubbly- bubbly electronica of The Orb, or Yoko Ono’s wordless vocal sheets of sound? Triple-Check. And let’s not forget Isaac Hayes’ funk-rock masterpiece “Do Your Thing,” a twenty-minute slice of psychedelic blaxploitation from the Shaft soundtrack. Awwww Yeeeaaaaaah, Check Baby! 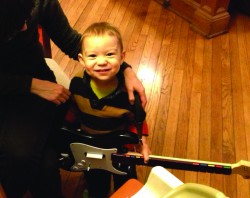 All of these artists put the “mental” back in instrumental music, even if some are known for their singing. Vocals may sometimes creep into an Instru- Mental song, but for the most part they are incomprehensible, buried in the mix, or make up only a fraction of a track. Sure, Hayes’ “Do Your Thing” has a couple minutes of singing, but it also contains a full eighteen minutes of fuzztone-laced spacefunk jams. Other artists who fall within my Instru-Mental genre, like Sigur Rós and the Cocteau Twins, feature vocalists—but they tend to sing in made-up tongues. Instead

of being about words, or text, their vocals are more about texture; the singing is just another tactile element in the sound recording.

Dirty Three first landed on America’s shores in the mid-1990s riding shimmering sound waves of oceanic ecstasy. They were part of a long, slow exhale after years of the sort of hyperventilating angst that defined the grunge era. “Post-rock,” as the genre came to be known, helped make fashionable music that had previously been lumped in with the self-indulgent gaucheness of progressive rock. Twenty minute songs became hip again. This new wave of bands was different than the likes of Yes and Emerson, Lake and Palmer because they weren’t obsessed with showing off their technical proficiency (even though many of these musicians, like Dirty Three and Tortoise, are very gifted).

Rather than cramming thirty notes into ten seconds, post-rock groups might play only three notes in the span of ten minutes—over and over, hypnotically, with subtle varia- tions. They don’t gulp down an entire meal in every musical measure, opting instead for a long evening of multiple courses made of simple ingredients. The same minimalist- yet-expansive impulse can be heard across several styles of music, whether we are discussing Steve Reich and other “new music” composers or surrealist studio wizards like dub reggae producer Lee “Scratch” Perry. To paraphrase P.M. Dawn, they set you adrift on sensory bliss. As for Dirty Three, particularly on their latest release, Toward the Low Sun, their musical universe gravi- tates towards in-the-moment improvisation. Three brains and thirty fingers become one as they move from understated intimacy to a grand, cinematic scale. (This allusion to film music is appropriate, given that Warren Ellis has collaborated with Nick Cave on scores, and is also a member of Cave’s groups the Bad Seeds and Grinderman.)

Next month I will be picking up where I’m leaving off by providing an extensive field guide to Instru-Mental music. A mixtape that contains some of my favorite mind-expanding wordless classics, downloadable from the Little Village website, will accompany my December Prairie Pop column. Think of it as an early holiday gift from me to you. In the meantime, Lil’ Alasdair and I will be devel- oping our Krautrock-inspired side project, RoboBaby and the Drones. Our first song title? “Pooping Sound!”

When he’s not keepin’ it real, or changing dia- pers, Kembrew teaches in the Department of Communication Studies at the University of Iowa.