For Laura Rigal, 15-year UI faculty member and professor of English and American Studies, the visual rhetoric of the ads for Park @ 201, the new Moen Group building on the Pedestrian Mall, composes a compelling archive of how Iowa City has been impacted by Anglo-European settlement, federal funding, finance capital, contestations over public space and differing ideologies of community development.

The pristine signs hang from construction fencing that currently surrounds all of Black Hawk Mini Park and the adjacent future site of Park @ 201. They feature over-sized black-and-white reproductions of historic images of downtown Iowa City’s past from the 1880s to the 1960s, with tag lines such as “This is there,” or “You are here. They are there.”

Only three differ. One poster features a series of images of the completed building—glowing in ephemeral moonlight, standing beside a Jefferson Building that looks positively blighted next to Park @ 201’s glass-walled newness; an interior shot displays slate rooms with chrome and gun-metal amenities, minimalist track lighting and floor-to-ceiling windows overlooking lush green treetops. Two smiling, productive 30-somethings—one young white man in a gray suit and blue tie, and one youthful black woman wearing all-white—suggest the arrival of the exact population developers hope to attract: upscale young people, the kind of people with disposable incomes and decidedly respectable tastes. A second poster boasts, “You are here. Downtown Iowa City. The place to be since 1839,” and another boldly states, “You are here” on the very spot that will soon hold “1.2 million square feet of retail and entertainment in downtown Iowa City.”

Rigal says she did not know how to read the campaign’s signage until she recognized one Father Knows Best shot as a 1953 image of the then-under-construction Robert A. Lee Community Recreation Center. She had run across the image while researching her current book project on urban renewal and Iowa City’s Ralston Creek. That’s when Rigal realized, “What they mean is they are in the past—you are in the present. They are there. You are here. Move on. Get over it.”

Visually, the signs resurrect images of downtown Iowa City’s development to relegate these moments safely to the past. To showcase their over-and-done-ness. To suggest all this is “behind you,” as in in the past, as well as behind you as in moving unequivocally toward ultra-modern development. 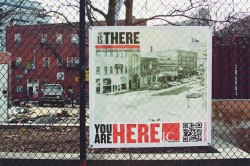 TIF and the Remaking of Iowa City

In a recent lecture, “Moen and the Mural,” currently airing on City Channel 4, Rigal explains that TIF structures loan public tax money to developers for a long enough period of time, in this case 20 years, to essentially relieve the developer and landowner of property tax obligations until the enterprises make enough profit to pay property taxes that can support public services. Iowa Code section 384.24 (3)(q) allows citizens to intervene in the use of general obligation funds for urban renewal projects; although the City Council was presented a petition with 862 signatures (many more than the 697 required to force a public vote), the Council simply changed the financing to revenue bonds, which are not subject to a public vote. In the eyes of petitioners, the City rode rough shod over participatory democratic process. Rigal is emphatic that this dismissal of public debate never would have happened without the City’s direct access to the developer’s capital in the form of TIF reallocation of property tax revenues . 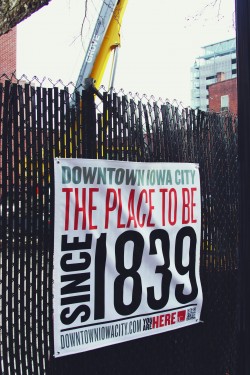 The name Park @ 201 invokes the memory of Black Hawk Mini-Park, named after the 1972 Black Hawk mural, itself named after the Sauk leader Black Hawk, whose defeat in 1852 opened the territory up to Anglo-European settlement. Invoking the Park’s name for a project that has short-circuited participatory democracy and embraced slash and burn modes of redevelopment over development that privileges re-use, rehabilitation and investment in public space, functions as a form of historical erasure—as a demand to walk away from our history—as a demand to re-new the past rather than carry it with us.

Rigal’s rhetorical analysis seeks to make visible the multiple layers of resistance, defeat and development that seem to be safely enclosed in the done-ness/backwardness of the past in order to place us uncritically, and a bit forgetfully, in the present moment. She also realizes the complexity of the issues. “There are many thoughtful people on the City Council who honestly believe that construction of Park @ 201 is good for the city. You’ll hear it is better than suburban sprawl, it’s better than cheap student apartments, it’s better than bars downtown,” Rigal explains. Above all, it’s better than the efforts of Iowa City’s downtown development nemesis, Coralville.

However, Rigal notes, the Black Hawk mural is a record of the bloody history of U.S. colonialism, of western expansion and of capitalist notions of progress. The uncovering of the mural reminded her of the history of public art in Iowa City, of its power to call city officials and developers alike to rethink their visions and to invest in radically democratic and transparent decision-making processes that privilege diversity over class-based homogenization, sustainability over perpetual cycles of creation and destruction, and visionary development over competitions between cities that put the circulation of speculative finance capital above the rejuvenation of neighborhoods, or above honoring local histories through the inclusive transformation of historical spaces.

By transforming the meaning of the histories of resistance signified by Black Hawk Mini Park, redevelopment of the space occupied by Park @ 201 has called us to think critically about what kinds of public art can effectively resist neoliberal rhetorics of progress. Will it be friendly creativity as symbolized by repainted downtown benches, or pieces like “Solidarity,” the mural on the City parking structure that abuts the Pedestrian Mall, which was privately financed by the Moen Group?

Given what Rigal sees as Park @ 201’s modes of historical defacement, she always marvels at the lack of actual graffiti on the site’s signage. When asked to explain, Rigal breathes in deeply and tries to concretely articulate her distress, “I guess my uneasiness has many sources, but mostly it strikes me that development issues are everywhere. This is one instance we can think about critically because it is local.”

Bolstered by the gaze of the mural’s buffalo, she adds with a wry smile, “It be-hooves us to act before they are erased again.”

Raquel Lisette Baker is working on a PhD in English Literary Studies at The University of Iowa, specializing in Postcolonial Studies with an emphasis in African Literatures in English. She received a BA in Psychology from San Francisco State University and a MFA in Creative Writing from Mills College in Oakland, California. She teaches General Education Literature courses. Her short stories have been published in The Womanist literary magazine and the anthology Crux.