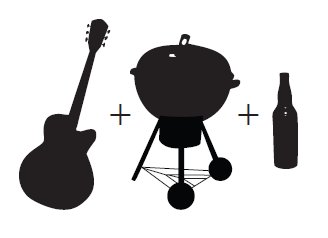 When I was a kid growing up in Chicago, summer’s actual arrival seldom coincided with what we considered the official beginning of summer—Memorial Day weekend.

Standing at the flower cart I manned during high school summers at the corner of Randolph and Michigan I’d watch the bank clock on the corner with a resentful eye—and bluish toes, as the temperature never even broke the 60 degree barrier—sometimes well into June.

This didn’t stop me from wearing shorts and sandals, though. Since it was past Memorial Day, summer had begun in my eyes, and if summer didn’t get the message, well, that wasn’t my problem.

In Chicago, the truest sign that summer had arrived was the delicious aroma of grilled meat wafting through the air all along the lakefront as the thousands of folks who had been held hostage by winter for entirely too long gathered to grill up some barbecue with their friends and family and offer up thanks for having made it through another long and gloomy winter.

Along with the warm laughs and cold beers that usually accompanied these feasts, there was almost always someone strumming on a blues guitar or playing some blues music on a portable radio or cassette player.

Blues and barbecue are as intertwined to me as coffee and cigarettes and, like them, each one only makes the other one better.

Closer to home, just across I-80 in North Liberty, the Liberty Centre Blues & BBQ Festival has been celebrating summer’s arrival in just the same way for five years now, bringing people together who’ve also been cooped up indoors too long to enjoy each other’s company along with some delicious lip-smacking barbecue enjoyed while listening to some toe-tapping and butt-shaking blues musicians.

Started in 2006 as a way for North Liberty to showcase its new Liberty Centre Park and give the citizens of that community a chance to come out and meet one another while enjoying this new space, the fest had only around a thousand attendees at its inaugural event.

It’s grown in size with each passing year as word spread about what an amazing, family-friendly and inexpensive local Memorial Day event it is, with over six thousand people attending last year.

Sponsored by local businesses, community organizations and individual private donations, the festival has grown beyond a mere showcase for the area’s best bluesmen and barbecue masters to become a truly family-oriented event featuring face-painting, a tug of war, a dunk tank, a bouncy-house and a slew of other kid-friendly games and activities sure to make the day a fun one for anyone bringing children, their own or otherwise.

The most popular activity for children has consistently been the “Fishing for Kids” activity, where children in attendance are given rods and reels from the North Liberty Recreation Department and are allowed to fish for crappies and bluegills in the stocked pond there on the park grounds.

For the grown-ups, in addition to the Blues and barbecue, there is a beer garden usually
featuring local micro-brews as well as a chance to get to talk with your friends and neighbors about something other than how lousy the weather has been. You may or may not recognize some of them without the parkas, scarves and boots that had been their standard attire the last time you saw them but what better environment could there be for seeing them again—or maybe even meeting some folks you’ve never met before—than with a beer in one hand and some ribs in the other while swaying to some meaty blues guitar riffs?

Past musical acts have included several members of the Iowa Blues Hall of fame and this year’s line-up promises to be the best one yet with a once-in-a-lifetime pairing of Ernie Peniston and Dave Zollo playing under the name “Temporary Blues,” as well as the Avey Brothers, Kevin “BF” Burt and the Instigators and Bob Dorr and the Blue Band, celebrating their thirtieth anniversary as one of Iowa’s most beloved blues acts.

The barbecue part of this Blues & BBQ event has gotten bigger and better—and more serious—each year as well, with a panel of experienced-pallet judges now assembled to judge the entries provided by the participants. Based on the judging rules and regulations established in some of the most renowned barbecue towns in America, like Chicago, Kansas City and Dallas, the quality of barbecue provided at the event has gotten only better with each passing year as the grill men and women jockey for the coveted first place award.

While it may be hard to believe that summer and all its wonders are just around the corner—especially with the completely uncalled for snowfall that came days after our temperatures spiked up into the 80s just a few weeks ago—by the time you’re reading this that kind of capricious and vindictive weather should be but a distant memory as we focus on the many great outdoor events that make the Iowa City area such a fantastic place to be, all summer long.

Iowa City’s Summer of the Arts programming—Arts Fest, Jazz Fest, Friday and Saturday Night Concert Series—will be kicking off in just over a month, but why wait for that when just a short trip to North Liberty can give you a head start on celebrating the season this Memorial Day Weekend?

The festival’s motto is “One Day. One Party. One Cool Time” and from everything I’ve heard about it from people who’ve gone in years past I know for certain I’ll be there—wearing a bib, covered in barbecue sauce, dancing to the blues and grinning from ear to ear, just like back home.