Much Ado About Nothing

This Friday, Riverside Theatre kicks off its beloved summer Shakespeare in the park at the Festival Stage in Lower City Park with beloved Shakespeare classic Much Ado About Nothing. But, there’s a twist.

Seven performances, running through Sunday, June 24 (all at 7:30 p.m.), are being offered to the public at no charge and with no reservation needed. (The theater’s second summer show, The 39 Steps, will be performed at the Gilbert Street theater for standard ticketing and pricing.)

From the Public Theatre in New York City offering Shakespeare in the Park in Central Park all the way across the country to L.A.’s Independent Shakespeare Company’s Griffith Park Festival and countless locations between, free summer Shakespeare is a staple of U.S. theater. It’s an invaluable chance for community members who are sometimes priced out of shows to experience (often) professional theater in an informal, familiar setting.

Riverside’s Much Ado features company favorites Kristy Hartsgrove Mooers and Patrick DuLaney as Beatrice and Benedick, the comedy’s bastions of highbrow bickering, destined for love whether they think they want it or not. Interim artistic director Sean Christopher Lewis directs the play.

This gift to the community is not Riverside’s first effort this season at reaching out and making connections beyond the Gilbert Street stage. In April, the company brought its production of Apples in Winter — starring Marquetta Senters, directed by Beth Wood and written by local playwright Jennifer Fawcett — to Oakdale prison to perform for the inmates there. The play captures the experience of a mother making a last meal for her son, who’s about to be executed.

That outreach effort was spearheaded by Kathrina Litchfield, whose work is in providing higher education opportunities to incarcerated populations (and who will be teaching the first University of Iowa course to be taught in a classroom inside, One Community One Book, at Oakdale this fall). She coordinated the effort between the theater and Oakdale warden Jim McKinney.

McKinney is a tireless advocate for such efforts. “When he learned the production required the use of a working oven, he not only rented the same exact oven Riverside used in its theater production, but installed a 220-volt outlet in the gym to make it functional,” Litchfield said. “He knew the scent of the baking pie was an essential element of the story.”

Interim artistic director Lewis believes that outreach can be the most important part of a theater, but he acknowledges the ongoing hurdles: “School tours are easy to ask funders,” he noted. “Prison tours are not.”

“This is a great town for programs and outreach like this. It just needs the support financially … I think as an interim artistic director the best I can do is create options and possibilities for the next person’s vision,” Lewis continued. “We’ve made inroads at the prison, we [are offering] free tickets for the Shakespeare festival, [and are moving toward] sponsorships that allow disadvantaged community members to see shows, to programming shows that may be more risky or representative — at the very least groundwork is laid for outreach in these ways to grow. I’m excited for that.”

Outreach is crucial on the audience side, as well. This free production of Much Ado is the perfect chance to invite a friend who has never been to a show before or encouraged a child to experience professional theater for the first time (like all Shakespeare, Much Ado has its moments of bawdiness and violence, but — on the page, at least — less than most). And of course, donations to the theater are always accepted. 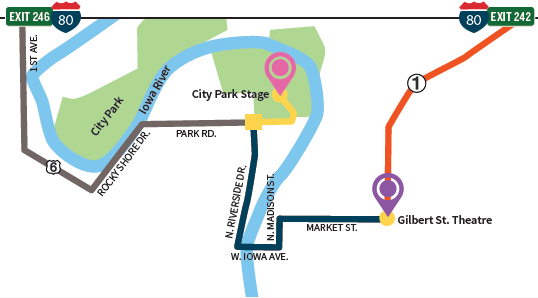 Audiences would be advised to arrive early, for multiple reasons. You won’t want to miss the 6:30 p.m. green show, an always hilarious micro-comedy that features the production’s non-Equity Association (i.e. union) cast, and typically springboards its content off of the main show.

Since tickets aren’t being sold, you’ll want to grab your seat as early as they let you for the main show. Last, ongoing construction in the area will make access and parking a hurdle. Wear your walking shoes, just in case, and be sure to check out the map and follow the signs.

Food trucks will be on hand ahead of curtain for folks making a full night of it. The theater’s concession stand will also be open for drinks. Bring a jacket, blanket or something to stake your claim on your desired seat on arrival, then relax and enjoy the evening pre-show.