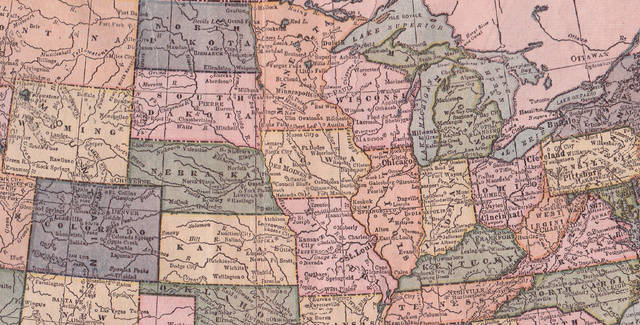 I’m a lifelong Midwesterner and a devotee to and student of the region. But I’m usually left stammering when it comes to defining the human culture of these middle lands. The U.S. Census Bureau’s definition of the Midwest includes over 65 million people. Can there really be a set of common characteristics among such a vast number of individuals that sets them apart from other regions?

Even the fundamental question of defining “the Midwest” by its geographical borders is difficult—consensus is elusive.

Making the rounds on the interwebs this summer was a map from a Boston Society of Architects exhibition called Reinvention in the Urban Midwest curated by Sasaki, a planning and design firm. The map is a result of an interactive online survey that asks people to define the Midwest’s borders (myc.sasakistrategies.com/branches/mymidwest). The eastern edges flow into New York, Pennsylvania and West Virginia. Kentucky, Arkansas and Oklahoma seem pretty solid on the map’s southern border. The western edges extend from the Texas panhandle as far as Idaho. And plenty of Canada is in “the Midwest,” too, extending on the north up to Calgary and Edmonton. Some responses even include Seattle, Las Vegas and much of northern Mexico. If the Midwest is a state of mind, this map redefines the idea of “expanded consciousness.”

So where do I come down on the question of the Midwest’s geographic borders? For whatever reason, I end up defining the Midwest as the U.S. Census Bureau does: Ohio, Indiana, Michigan, Illinois, Wisconsin, Missouri, Iowa, Minnesota, Kansas, Nebraska, South Dakota, North Dakota. Still, even though these states may make up the same geographically named region, each is very unique.

We recently returned from our regular family sojourn to northern Minnesota near Ely and the Boundary Waters, yet I find it a world completely different from my Iowa home, although it is squarely in the “Midwest.” Up there on the Canadian Shield, 2.5 billion-year-old bedrock is at the surface. Good luck finding an oak tree growing from the paper-thin layer of acidic topsoil. You couldn’t grow corn and soybeans there if you paid Nokomis, the Ojibwe mother of life. Moose, wolves and ravens tromp and fly around freely. On the trip home, the first cow appears 150 miles south of Ely. The locals’ concerns focus more on proposed copper-nickel mining and motors on wilderness lakes than corn futures and Egyptian fertilizer plants near Fort Madison. When I’m up north, I know I’m not in Kansas (well, Iowa) anymore. I’m hard-pressed to find what ties us together as so-called “Midwesterners.”

I have lived and taught in Illinois, Wisconsin, Iowa, Michigan and Minnesota. I have often asked my students to define the borders of the Midwest. My experience doing this has led me to an (unscientific) observation: The Midwest radiates out in a circle from the respondent’s location at the center.

When I asked the question in Michigan, Pennsylvania was often included; not one student mentioned either of the Dakotas, and I got only a smattering of Minnesotas. When I asked students in Moorhead, Minn. (just a wheat stem away from Fargo, N.D.), Montana and Colorado were popular answers, and it seemed as if they had never heard of Ohio and Missouri. Nearly always, the responder’s own location was at the center of the circle.

Which brings me back to my conundrum—how greater intimacy with a place and its people makes them more complex and undefinable. I think that comes from, over time, knowing a larger and larger number of people in the region and the community—an increasing circle of selves. The self is indeed the center of the universe, and we are all individual universes of profound uniqueness. We tend to define our community and even our geography from the perspective of our self at the center. That’s not a surprising or profound conclusion, but it complicates defining “community interest” and local “values,” let alone regional borders. More often than not, those definitions are masks for claiming what we as individuals, or a group of like-minded individuals, want. I’m not criticizing people for being self-centered, I’m just saying that I think we sometimes don’t admit to ourselves how incredibly difficult it is to escape the self, how the “center of the universe theory” makes it very hard to define a region or to create community consensus.

Oh, and by the way, as I’ve solidified my own Midwestern map over the years to conform to the U.S. Census Bureau’s? Iowa City is about smack dab in the middle of that.

Thomas Dean is a middle child.